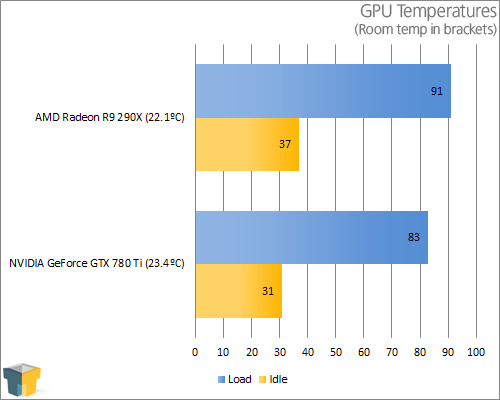 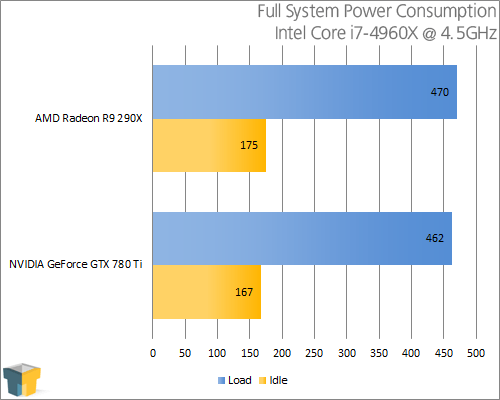 As with the performance results we’ve seen through this article, NVIDIA edges AMD out here. On the power front, the differences are small enough to call them non-important, but it’s kind of hard to ignore the 91°C peak of the R9 290X. While AMD states that 90°+ is no problem as far as hardware stability goes, it’s not a value that gives me the utmost in confidence – even 80°C is pushing it, and makes liquid cooling look all the more tempting.

There are some things that neither of these charts can show, however, such as noise. The R9 290X in particular not only runs hot, but it runs loud as well. So loud, in fact, that it gave me flashbacks of the GTX 480 – both cards can sound like miniature jet engines while gaming. For those who game without headphones, or at low volume, that sound is going to get annoying, believe me.

AMD understands this as well, which is why the “Quiet” mode switch is included. But, given the fact that this switch is on the card itself, it’s not exactly the most convenient, and past that, it causes the card to run even hotter. That’s hardly ideal.

The thing to bear in mind with this issue though is that it’s exclusive to R9 290Xs that utilize the reference cooler. I’d never expect these sorts of temperature / noise level issues with third-party models. In a matchup between AMD’s R9 290X and NVIDIA’s GTX 780 Ti reference coolers, NVIDIA wins hands-down. R9 290Xs with the reference cooler are common, so I’d recommend steering clear.

Don’t care about noise or heat? Note that another downfall of an inefficient cooler can result: Dropped performance. If the R9 290X does not have a lot of room to move air around – even outside the chassis – it can overheat and result in reduced clocks. Normally, the test PC I use is situated nearly a foot in front of a wall, and in between two desks – something I wouldn’t consider too atypical of a normal setup.

In that configuration, there wasn’t enough room for air to move outside of the chassis, so the 1GHz target clock speed of the 290X sometimes dropped to 970MHz or 937MHz. In the exact same chassis placement, the 780 Ti did not experience this issue; instead, it sometimes went above its normal clock speed. When I hauled the PC out a couple of feet further, the 290X never dropped below 1GHz – and at the same time, it didn’t get quite as loud. Food for thought, especially if you’re planning to go the 290X route, but again, I wouldn’t expect these issues to creep up with third-party cards.

Some articles are difficult to wrap-up, and this one is a perfect example. If the R9 290X were priced as it should be, drumming up a conclusion would be a simple affair. Of course, that’s not the case. The R9 290X costs $150 more than it should, and given all we’ve learned through the course of this article, that puts the card at an uncomfortable spot, which means NVIDIA’s ahead. If we all woke up tomorrow and the R9 290X were back to its $549 price-point, though, conclusions would change.

While it almost feels unfair to AMD to even compare these two cards, the fact of the matter is that both retail for around $700 right now. Things could change, but we can’t expect them to. If something happens and coin miners begin unloading their cards en masse, that might make AMD’s offerings look even more attractive than they do right now, since you’d likely be able to score a card for cheap (on the flipside, this wouldn’t be an ideal situation for AMD). 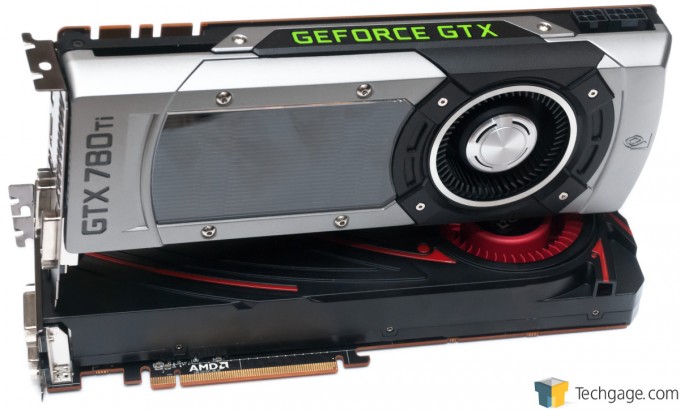 At this $700 price-point, it’s hard to argue that NVIDIA comes clean ahead. Things change if we’re talking about mining efficiency, but on every other front, NVIDIA’s package is better: The 780 Ti performs better overall, runs cooler and quieter, and boasts a couple of features that I consider to be awesome (ShadowPlay, for starters). At the moment, AMD’s best unique features are going to take some time to establish themselves, and even then, Mantle is likely to have limited use to someone running a high-end AMD card (because they likely also have a decent CPU).

Taking a look at the flipside, imagine if the R9 290X was being sold at this moment for $549. If that were the case, then it would be a heck of a lot more appealing. Looking at things from that perspective, we’d be talking about a card that costs $150 less than the 780 Ti. The card might then run hotter and louder, but its overall performance would help negate those cons.

At that point, the 780 Ti would still look impressive based on its efficient cooler, lower noise, and robust featureset – but that might not matter to some people. For me, it does, and I’d wager that the extra $150 would be worth it for the 780 Ti. You might disagree, and if you don’t care about NVIDIA’s unique features, you probably would.

At the end of the day, NVIDIA gets the definite nod here – the 780 Ti is simply a fantastic card. AMD’s is no slouch, but it has enough caveats to make its current pricing a major turn-off – unless you’re a coin miner, of course.