When AMD announced its Navi series last summer, it felt to us like a competitive Radeon ray tracing solution was at least two generations away. Well, we have to admit that we we’re seriously impressed with how quickly AMD has churned out a fairly competitive solution, although as we’ll see in the results below, if AMD wants to compete with NVIDIA, it has to hope that a game doesn’t support DLSS.

As mentioned on the previous page, the ray tracing performance of AMD’s Radeon RX 6800 XT roughly matches the CUDA-only performance of last-gen’s TITAN RTX. That should be downright amazing, but both NVIDIA’s Ampere and its accelerated ray tracing cores put a damper on it. If a game or creator solution takes advantage of NVIDIA’s RT cores, AMD will struggle to compete.

At the moment, whether or not a DXR game behaves well on Radeon is going to depend on the ray tracing features implemented, and how neutral the game engine is (if it uses RT cores, as mentioned above, then Radeon will suffer.) All four of the games on this page were developed around NVIDIA’s RTX, and they all currently work on AMD’s Radeon 6800 series – so performance aside, we consider that to be really impressive.

Please note that most of the games on this page were tested without NVIDIA’s DLSS enabled, and in all cases, if DLSS is an option, it’s going to provide a huge performance boost. The Minecraft result later will highlight the kinds of differences that can be seen; it was the only game tested with DLSS due to time limitations. It’s safe to say, however, if the game you want to play supports DLSS, you need to do the smart thing and just go the NVIDIA route, because the performance jump will be huge. 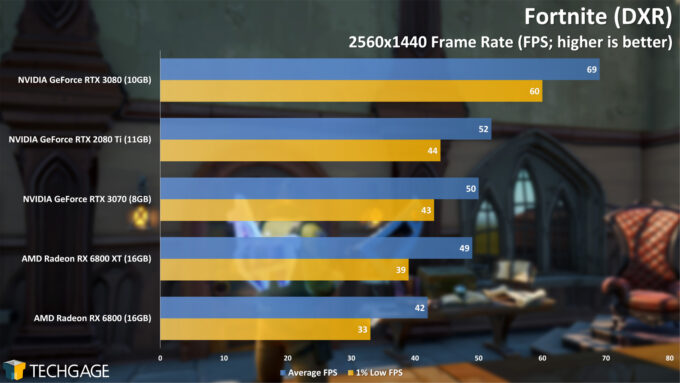 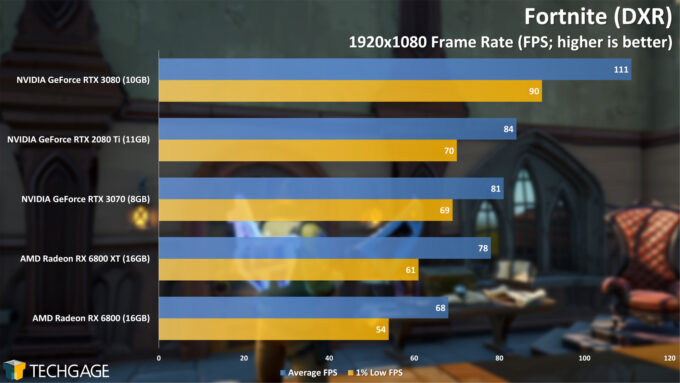 In Fortnite, we stuck to testing the same RTX Treasure Run, as we’re quite used to it at this point, and there are no specific NVIDIA optimizations in it (that ignores enabling DLSS in the game, of course.) Even before DLSS is added, NVIDIA’s cards outperform AMD’s pretty easily here, and while the GPU is not included here, it’s safe to consider the 6800 XT to be on par with TITAN RTX’s RT performance – if we ignore the RT and Tensor cores on the GeForces. Clearly, Fortnite in DXR belongs to NVIDIA. 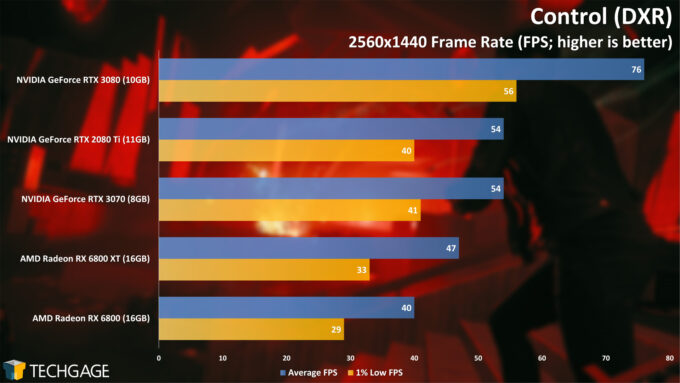 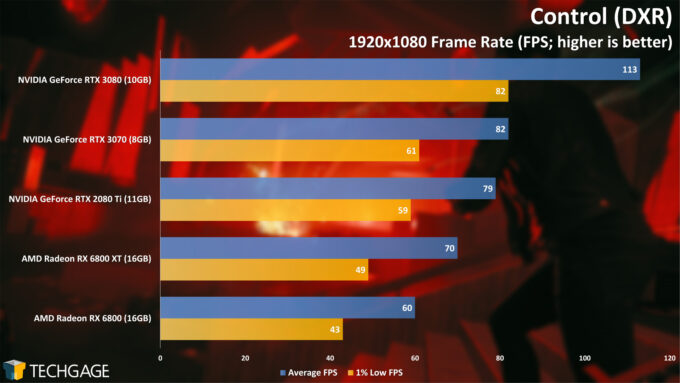 Addendum: Some of the original data above was inputted incorrectly, so the charts have been updated.

Continuing from a theme set with Fortnite, Control DXR performance out-of-the-gate benefits from the generally strong RT performance on NVIDIA’s graphics cards – and to think, this is without DLSS enabled. With DLSS enabled, it means you can run the game at 4K on the RTX 3080, or increase the RT detail at lower resolutions. 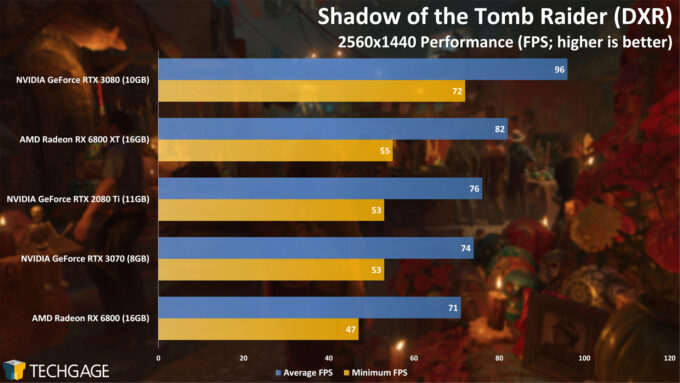 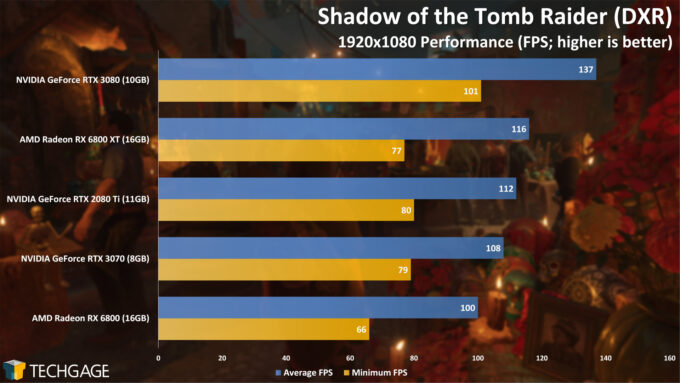 Shadow of the Tomb Raider is one of the first ray traced titles to be released after the launch of NVIDIA’s Turing, and it apparently doesn’t take advantage of NVIDIA’s RT cores as much as we thought. Here, AMD’s new Radeons perform really well, and in our side-by-side analysis, we couldn’t see any fidelity differences between either GeForce or Radeon.

It’s performance like this that proves why we will see some ray tracing on consoles. But, as we’ve seen from some released titles thus far (eg: Spider-Man: Miles Morales), reflections are going to be an option as well. We just haven’t seen strong reflections performance from Radeon on PC so far, but that’s likely to improve over time, as console developers primarily have Radeon to develop around (ignoring the NVIDIA-powered Nintendo Switch). 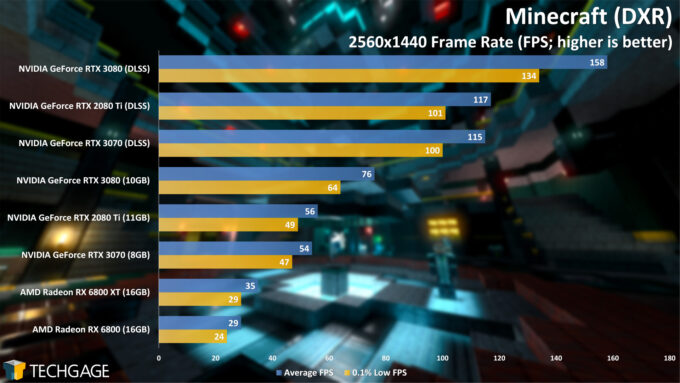 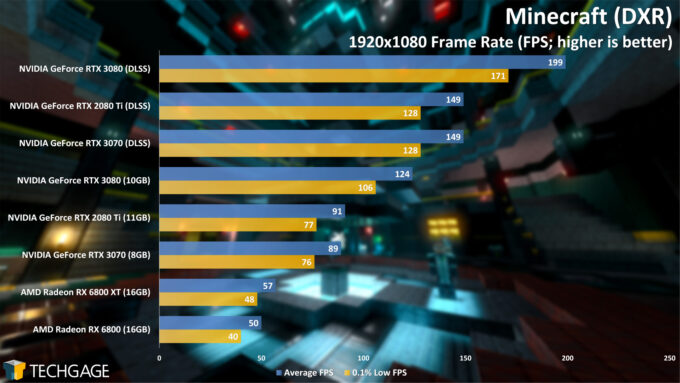 Minecraft‘s ray traced beta will automatically enable DLSS if a capable GPU is present, and it’s for good reason. Enabling DLSS dramatically improves performance, and we see specific examples of that here. Enabling DLSS on the RTX 3080 increased performance from 76 FPS to 158 FPS – somehow more than 2x. This isn’t really surprising given we see similar gains from NVIDIA’s RT cores in creator use for rendering, and Tensor cores for AI denoising.

At 1080p, either the 6800 and 6800 XT will deliver playable results, but RTX 3080 with DLSS is over 4x faster than 6800 XT at 1440p, so… what more needs to be said? AMD has made incredible ray tracing performance gains from one generation to the next, but NVIDIA’s RT performance is still stronger out-of-the-gate, even before adding in DLSS or accelerated ray tracing. Because of DLSS, 4K resolution is easily done on many GeForces.