To take a look at the new Radeon RX 6800 series cards from a power perspective, we’re using UL’s 3DMark Fire Strike 4K stress test, and the PC plugged into a Kill-A-Watt to monitor for power draw. The PC is left to sit idle for five minutes before that respective value is counted, while the load value is recorded after at least ten minutes of stress. 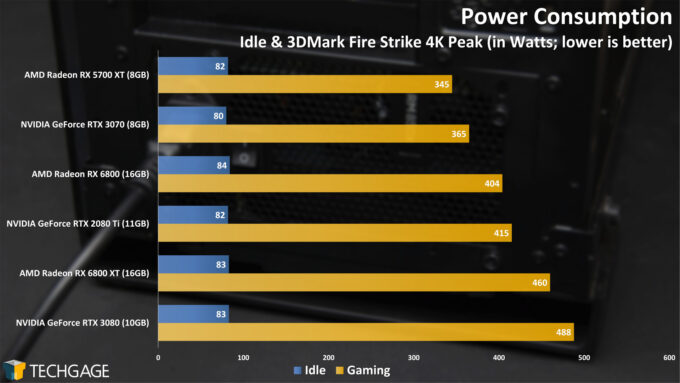 AMD’s new RX 6800 XT doesn’t just go toe-to-toe with NVIDIA’s RTX 3080 more often than not, it uses a little less power at the top-end, to boot. As for the RX 6800, it draws a fair bit more power than the RTX 3070, which is to be expected given the improved performance we saw from that card.

Ahead of AMD’s Big Navi launch, the community at large had been hoping that the company could pull off for GPU what it had done for CPU. There’s no question that Zen has proven to be a real blessing for AMD, even if it is well earned. With Zen 3, we’ve seen the performance gap completely closed with Intel, and in many cases, AMD comes ahead. We’re not quite seeing the new Radeon series topple NVIDIA like we’ve seen Zen 3 lay the hurt on Intel, but what we’ve seen AMD deliver here is downright impressive.

As it stands today, AMD is offering really compelling graphics cards for their respective price-points. The 6800 XT is priced $50 less than the RTX 3080, but proves no weaker overall in our tests – if we ignore ray tracing. Five of the nine standard games we tested performed better on the 6800 XT at 4K (vs. RTX 3080). It costs less, and has 6GB more memory. How could that not be impressive? 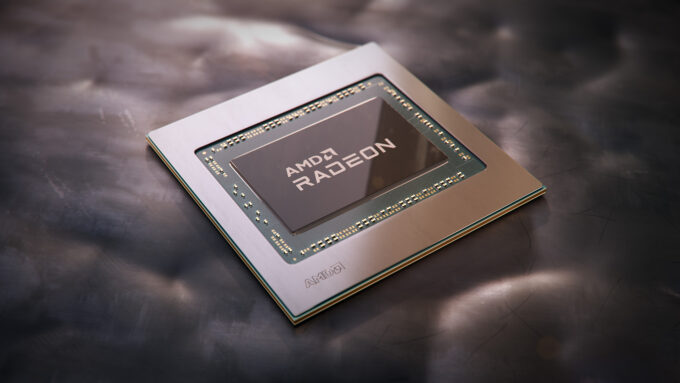 As for the RX 6800, it costs $79 more than the new RTX 3070, but the performance leap it offers fully justifies that price premium. The performance boost alone is worth the price premium, but users get double the VRAM at the same time. AMD has really delivered here.

Naturally, and not surprisingly, where AMD lacks with this current generation is with ray tracing performance. That’s too bad in a way, since AMD did manage to match the TITAN RTX’s CUDA ray tracing performance with the 6800 XT, in either gaming or creator. But… those dedicated RT cores on NVIDIA’s cards prove way too powerful for AMD to stand a chance.

As high performing as AMD’s new cards are, if you care a lot about ray tracing, then you’re going to have to go the NVIDIA route. Ampere on a basic level is faster in ray tracing than Big Navi, and that’s ignoring the accelerators that exist. As we saw with Minecraft a couple of pages ago, enabling DLSS can sometimes double the ray tracing frame rate, and also enable 4K resolution – which is impossible on Radeon right now if you expect playable frame rates.

Because the market has revolved most of its ray tracing efforts around NVIDIA’s RTX the past couple of years, compatibility out-of-the-gate is going to be better for the green team. Since Radeon graces both of the current-gen consoles, it means developers are going to become intimately familiar with it, which will hopefully lead to improved performance over time on the PC.

Overall, AMD needs to be proud of its graphics comeback here. The company’s Navi launch last summer was good in its own right, but with Big Navi, AMD has finally returned to the high-end. And to think, an even higher-end RX 6900 XT is en route. Let’s hope AMD supply is better than what we’ve seen from Ampere. It goes without saying: these new Radeons will sell fast, so you’ll need to be determined if you want to try to score one right away.