Fortunately, the situation is getting a lot better over time. As an example, for most of its life, Adobe’s Lightroom didn’t use more than a few cores and threads. Today, the application can use most of whatever CPU you can hand it, although we’re not sure it uses it entirely effectively. We’re actually planning on looking into that very soon.

The performance look on this page is going to tackle Adobe’s ever-popular Premiere Pro, MAGIX’s Vegas Pro, and HandBrake. That trio takes care of video encoding, while Agisoft’s Metashape will help with a photogrammetry scenario. Finally, we’ll wrap up with audio encoding, and before we catch FLAC for dilly-dallying, let’s get into the first results: 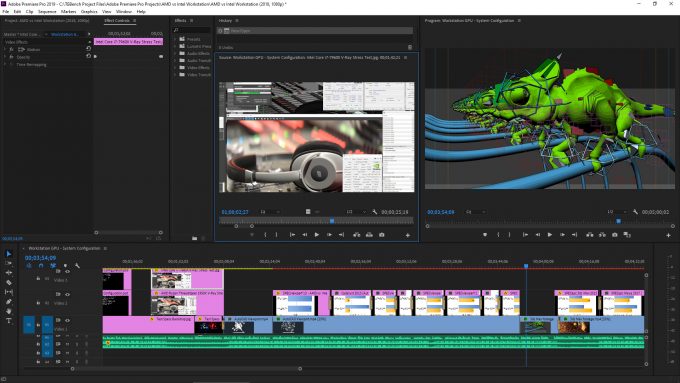 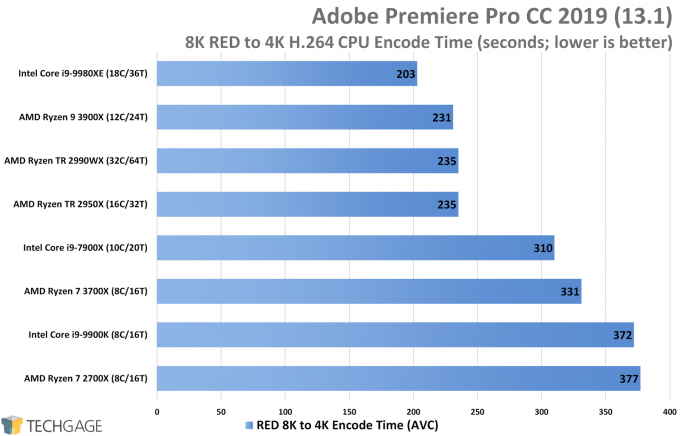 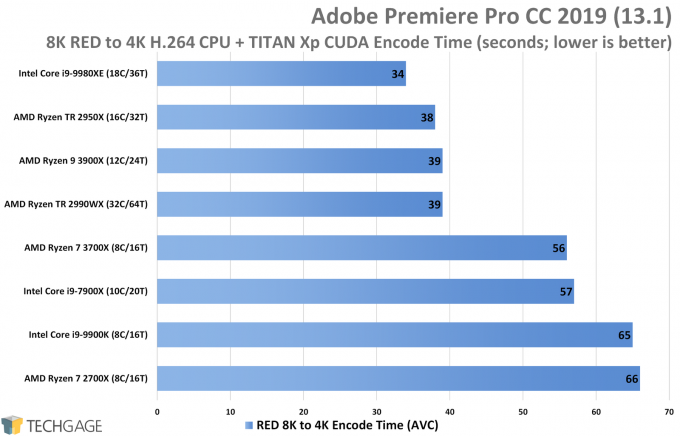 It’s safe to assume that Intel is going to be a stronger contender in scenarios like video encoding, based simply on the fact that our nearly fifteen years of benchmarking experience has hinted to it. With Zen 2, though, it seems like AMD is putting up one hell of a fight in this transcode test. Despite Intel’s typical strengths here, AMD’s 12-core 3990X sits only behind Intel’s 18-core 9980XE.

There are some other interesting results to pluck out of this collection. At the $500 price-point, AMD clearly wins. Seriously, that performance delta is huge. That 12-core almost keeps up with last-gen’s 16-core. And how about the 3700X? It also manages to beat out the 9900K. The core counts are the same between these models, but that can’t be said for the price-points.

We’ve seen countless times in the past that real projects behave differently than straight encodes from one format to another, so let’s see what a real-world project does: 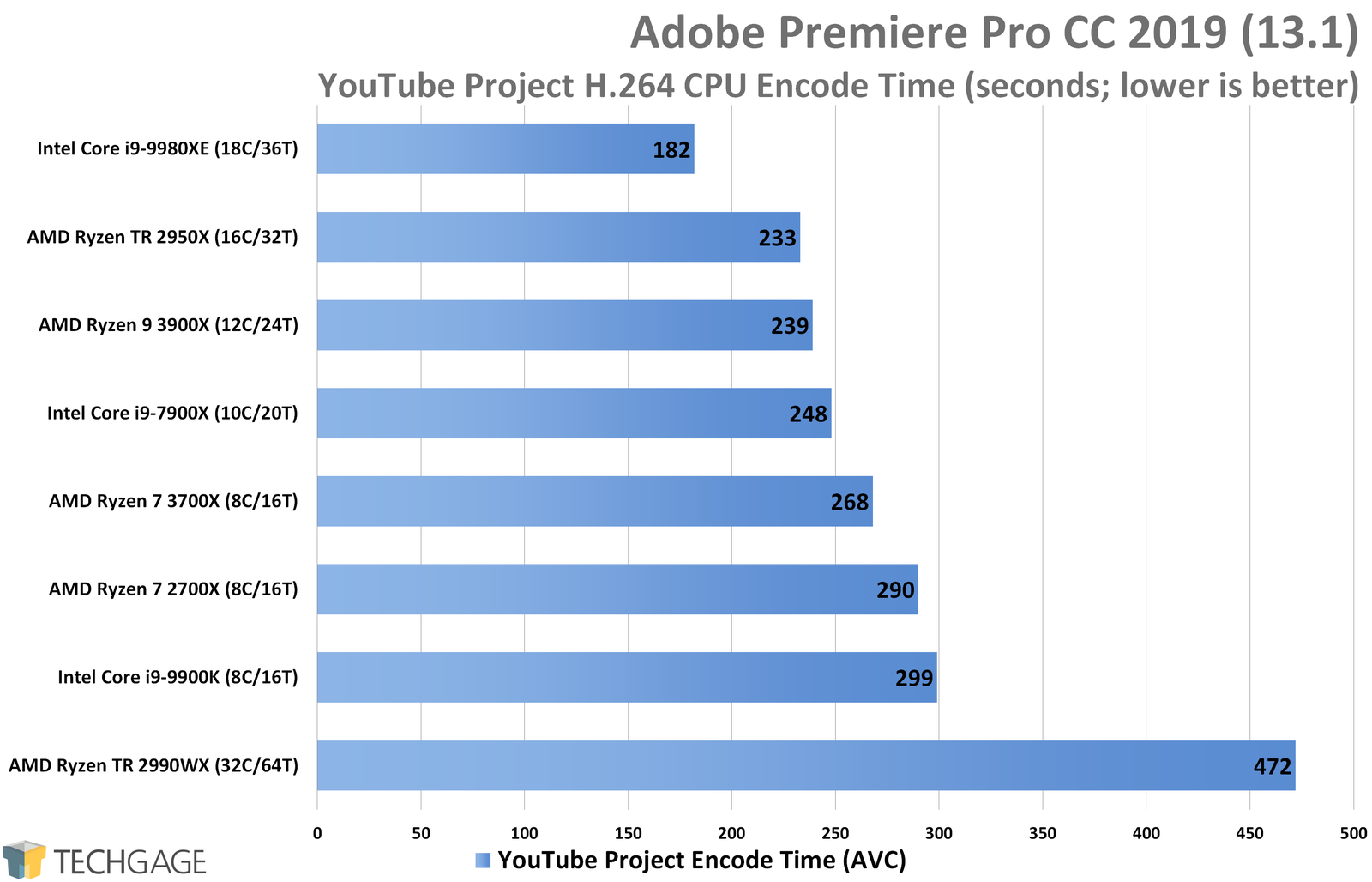 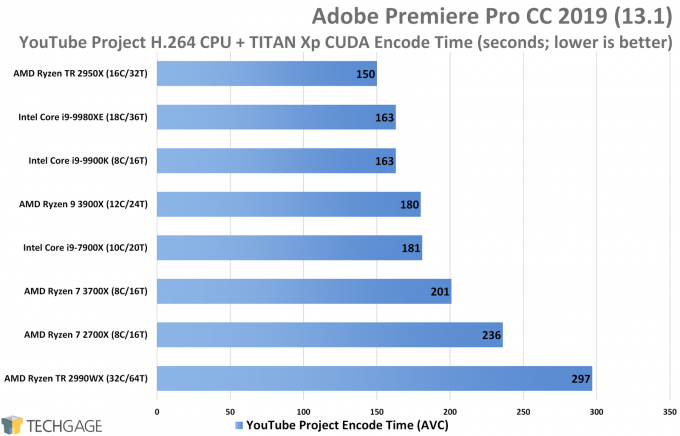 AMD’s 3900X continues to perform extremely well here, again almost matching the 2950X in the CPU-only test. When the GPU is brought into the fight, things change-up a bit. Somehow, the 2950X actually outperforms the rest of the lot here, which could be an anomaly in testing. Premiere Pro isn’t exactly the most stable performance-testing platform, so we never know what to expect. We do remember that last-gen, AMD struggled with Premiere, but now, that certainly doesn’t seem to be the case. 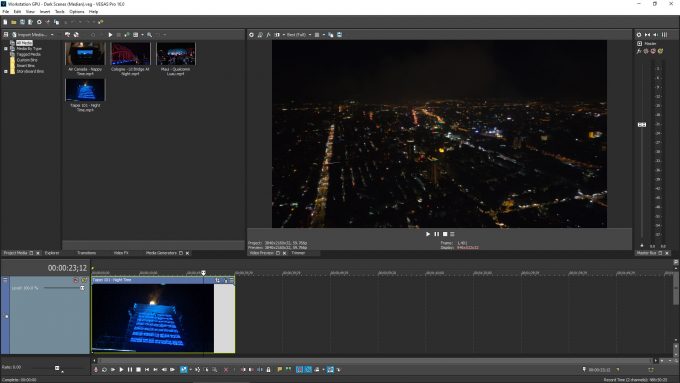 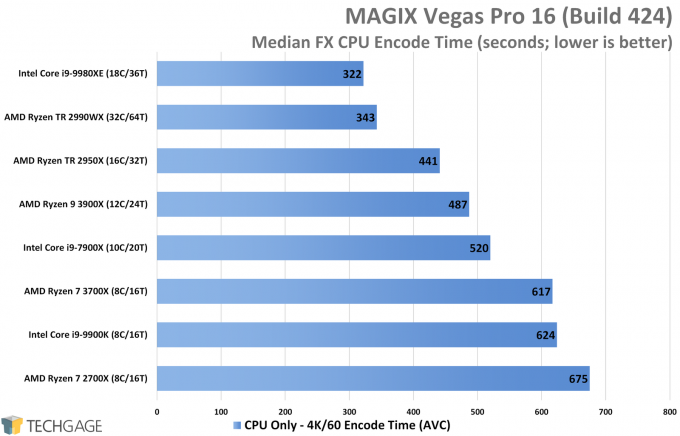 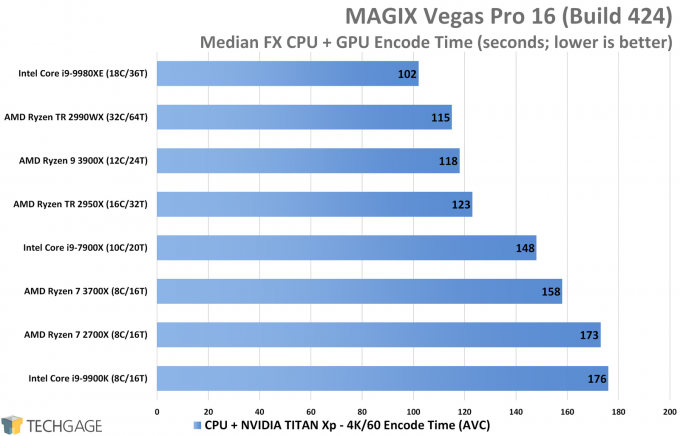 It might have a lot more cores, but the mighty 2990WX can’t trounce Intel’s 18-core 9980XE in Vegas, whether or not the GPU is involved. In the match-up of 9900K vs. 3900X though, AMD continues to impress, again winning the contest in both tests, and by a huge margin.

The 3900X is an impressive chip to the point where it’s easy to ignore the 2700X successor, but the 3700X continues to perform great here, leaping well ahead of its predecessor. That’s even with similar clocks, so it’s not been hard so far to find some notable Zen 2 improvements. 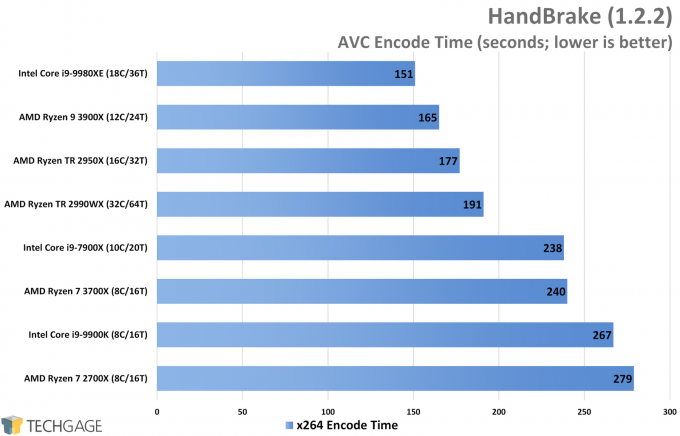 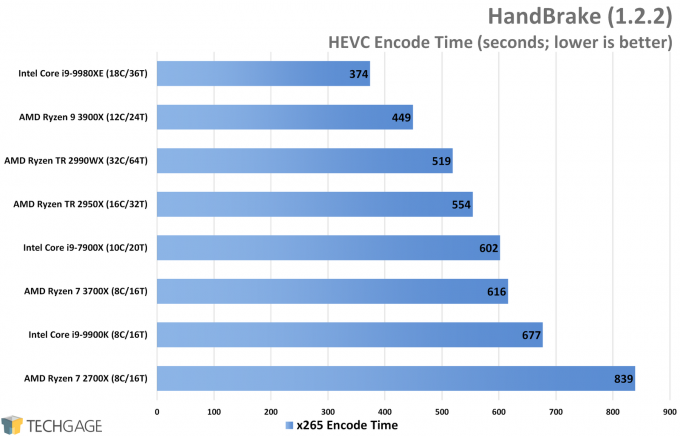 The 3900X yet again struts its stuff very well in HandBrake, even managing to beat out some much larger Threadrippers. With the 2990X, that’s due to some obvious threading issues, but beyond that, the 16-core 2950X once again fell short of this new 12-core’s performance.

When you compare the 3700X to the 2700X, it’s clear that AMD flicked one hell of a switch. These 8-core chips are similar overall, except for the fact that the newer gen has cranked up its cache (ridiculously marketed as Gamecache), and that sure can’t hurt. The differences are downright amazing generation-to-generation. 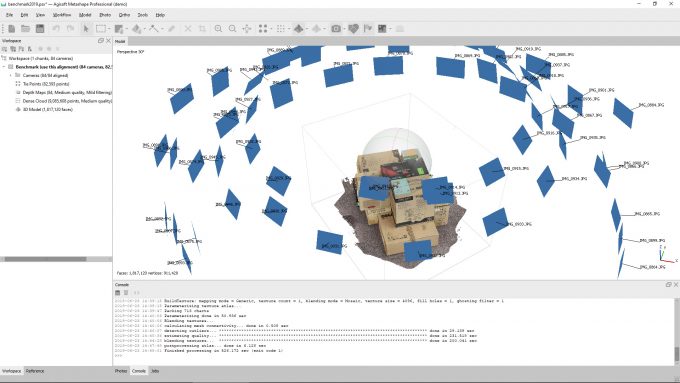 Metashape, the artist formally known as PhotoScan, is a popular photogrammetry tool that makes life for its users a lot easier when there’s some powerful hardware waiting to be exploited. This is one of the more complex tests we run, because not all of its actions apply to one process or another.

The entire test consists of four steps, with the first being Align Photos. The GPU is used in this step for the Match Photos portion, while the CPU handles Align Cameras. This process shows no real scaling, so it’s ignored in the results. The next step is Build Dense Cloud, which uses the CPU and GPU heterogeneously for its Depth Maps Generation Time step, and only the CPU for Dense Cloud Generation Time. The final steps are Build Mesh and Build Texture, both of which use the CPU exclusively. 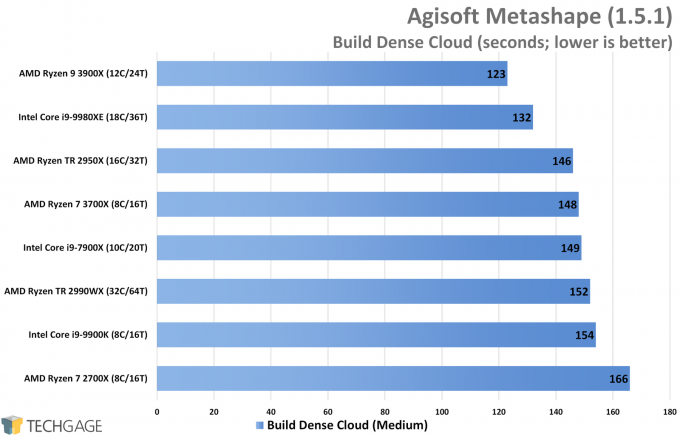 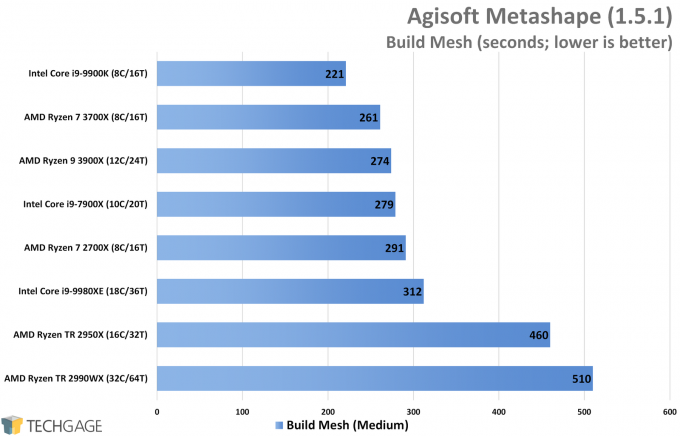 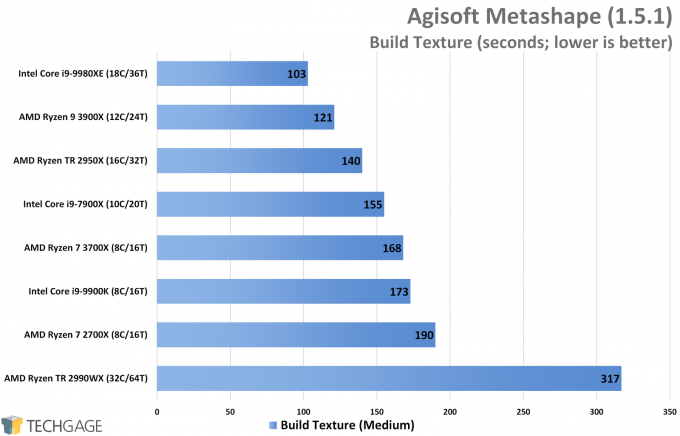 With both the CPU and GPU used in the Build Dense Cloud step, it seems like there’s some bottleneck that prevents great scaling being seen up and down the stack. Interestingly, AMD’s R9 3900X did manage top billing in that particular test, though the real pain begins with mesh building. In that chart, both of AMD’s new chips included here pop up at the top, just behind Intel’s 9900K. We have a sneaking suspicion that clock speed matters more than cores at a certain point with this test.

Finally, the Build Texture result puts Intel’s 18-core on the top, with the R9 3900X trailing behind. It’s interesting that the newer Ryzens are proving so much better than the previous generation, but mostly Threadripper, which has more cores. Even the 2950X has issues in the mesh test, but manages to perform just fine in the texture building test. Truly unpredictable behavior, but it’s nice to see none of that with the new chips. 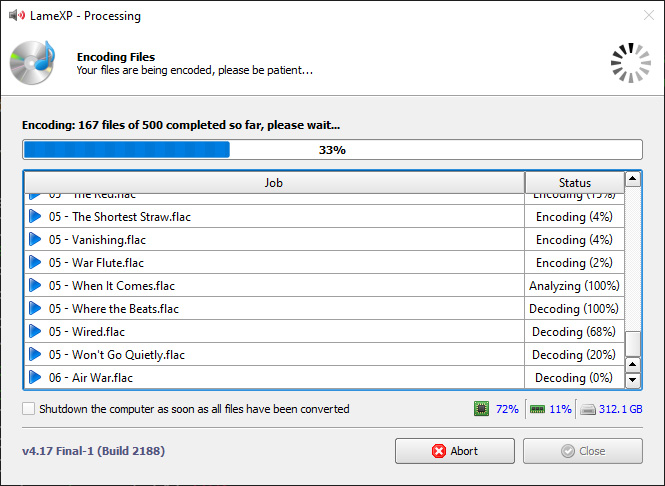 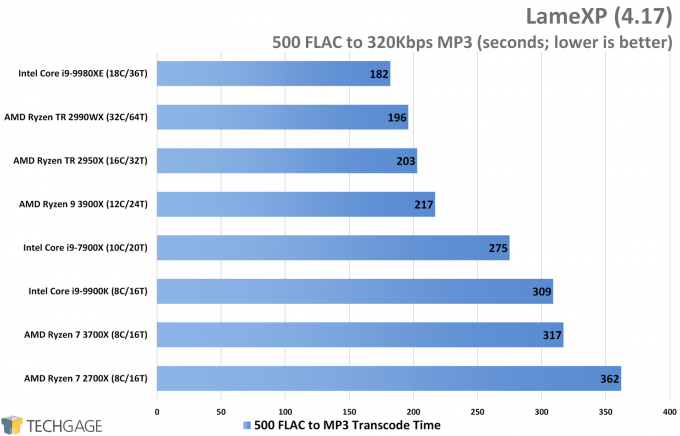 Music encoding is about as neutral as a test can get. What matters more is cores, and to some extent, clock speeds. Intel has a great combination of both with the i9-9980XE and takes the top spot here, with the 32-core AMD not falling too far behind.

As for the new chips, the 3700X again shows some great strengths over the last-gen 2700X, but it didn’t have what it took to overtake the 9900K in this particular test. From a price standpoint, things change a lot, with the $500 3900X cutting nearly 100 seconds off of a 300 second process. Not bad!