On this page and next, we’re tackling many different renderers, because not all renderers behave the same way. That will be proven in a few cases. If you don’t see a renderer that applies to you, it could to some degree in the future, should you decide to make a move to a different design suite or renderer. An example: V-Ray supports more than just 3ds Max; it also supports Cinema 4D, Maya, Rhino, SketchUp, and recently announced, Houdini. 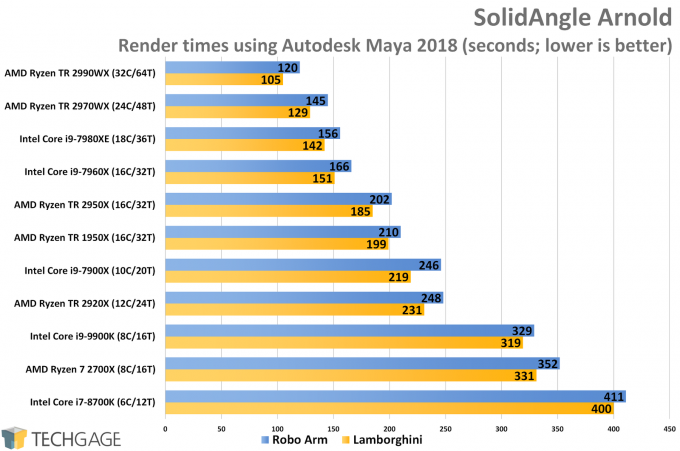 With Arnold, the 2970WX performs great. It again keeps ahead of the 18-core Intel competition. The 2920X didn’t have the same kind of luck against its 10-core 7900X competition, despite coming ahead in all but one test on the previous encoding page. Since Arnold only uses the CPU for rendering, it’s nice to see that the software will scale really well . GPU support is coming, and you can bet your ass we’ll be doing some heterogeneous testing once it becomes available. 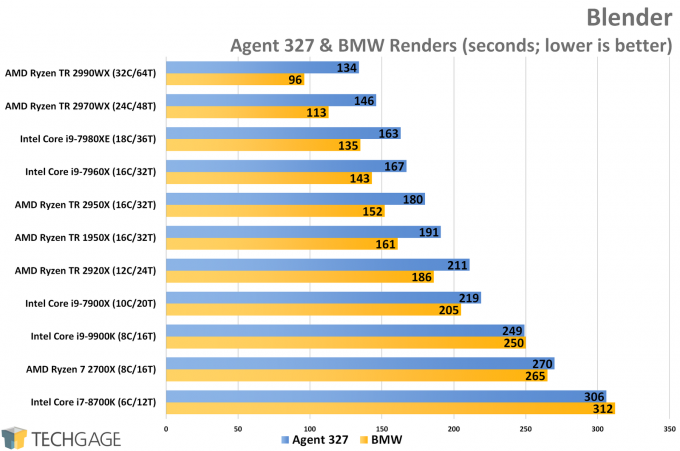 Performance in Blender isn’t that different from Arnold. The 2970WX sits in second place, behind its 32-core bigger sibling, while the 2920X has redeemed itself in its battle against Intel’s 10-core 7900X. “Redeemed” might be a poor way to word it, though, since AMD has a definite cost advantage. 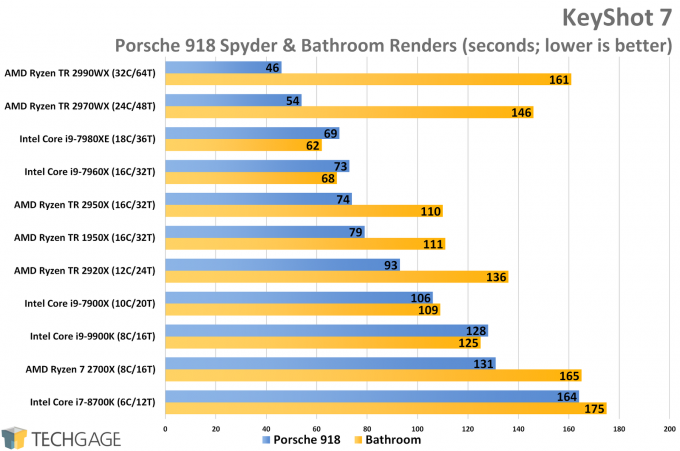 You might recall that Coreprio has been mentioned a couple of times in this article. That’s the tool that helps fix performance regressions on the 2970WX and 2990WX, like the top two orange results here. This is one benchmark where Coreprio actually smooths out the regression. That fix decreases the 161s result on the 2990WX to 82s. This and other performance differences will be seen in a forthcoming article.

We left the regressed performance result here because out-of-the-box, this odd performance will strike some users, so it needs to be known about. Also, AMD’s own Dynamic Local Mode helped with performance in this same regression instance, but not nearly to the effect of Coreprio. So, people need to know about Coreprio in order to fix potential regressions. 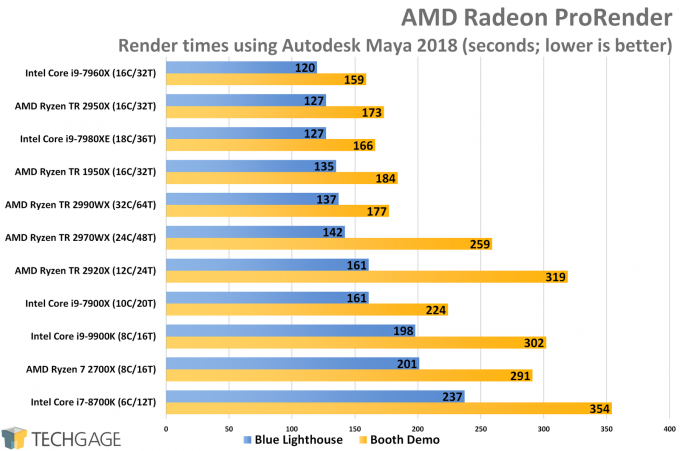 As odd as it might be, AMD’s own many-core CPUs do not perform too well in its renderer. That may be largely fine since ProRender focuses on the GPU, but the software recently gained heterogeneous rendering capabilities, so it’d be great to see better scaling on the 24- and 32-core chips. Somehow, Intel’s 16-core chip rules this graph, sitting ahead of AMD’s core-equivalent 2950X.

The version of ProRender used for this round of testing is a version out-of-date, so it could be that the newest version out there will improve performance on those big chips. Since this performance testing wrapped-up, we switched our ProRender platform to 3ds Max, since it’s easier to deal with for benchmarking purposes. 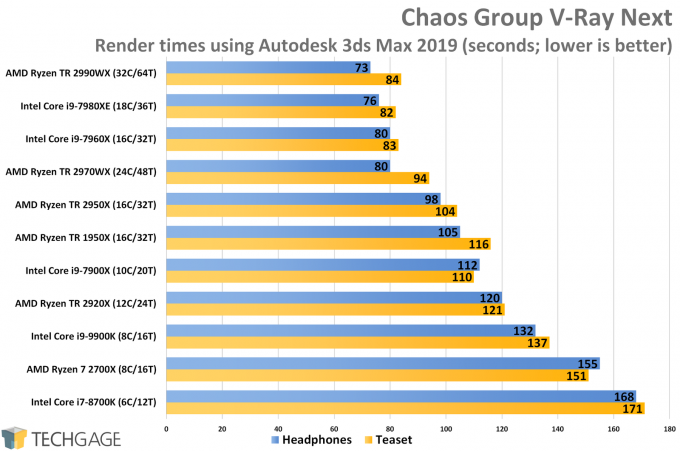 AMD’s 32-core 2990WX does battle well with Intel’s chip, but the latter company can boast that it could get the job done just as fast, and with fewer cores. The gains in V-Ray from top to bottom are not as great as it was with other renderers – such as Arnold, which showed the 2990WX to be over 3.5x quicker than the 8700K.

For future V-Ray testing, even in CPU reviews, we’ll introduce the GPU for the sake of showing the full picture, since many will take advantage of heterogeneous rendering if they’re willing to introduce the GPU into the mix. We don’t believe that Chaos Group considers its GPU renderer to be suitable for final production rendering, but we’re edging closer to that reality. For iterative rendering, combining the powers of the CPU and GPU is a no-brainer. 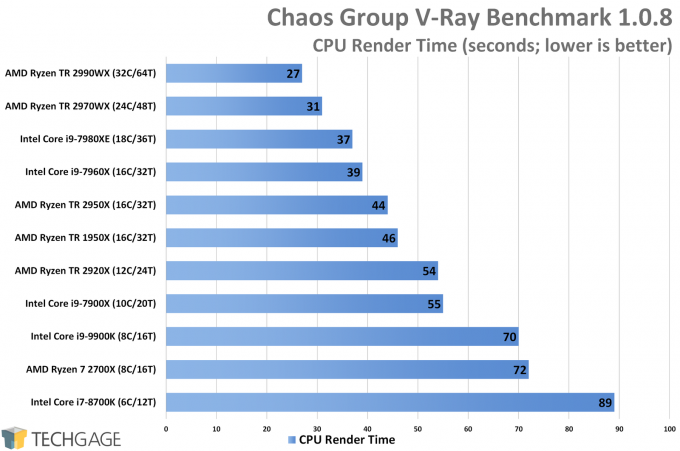 With a real V-Ray 4.X in 3ds Max, the performance delta between the top and bottom wasn’t too great, but according to Chaos Group’s 3.5-based standalone benchmark, disagreements are made about that kind of scaling. It could be that in specific projects, scaling will in fact be impressive, but with the two projects we use in testing, no such gains were seen.