Just as we were starting to believe that 16-core CPUs were amazing, AMD has come along and dropped a 32-core bombshell. It’s called Ryzen Threadripper 2990WX, a workstation chip that cuts through renderers like butter. We’re putting it up against the forthcoming 2950X, and six other unsuspecting processors.

There are few things I find quite as satisfying as rendering: seeing a bunch of assets thrown into a viewport that manage to turn into a beautiful scene (well, none that I touch). Rendering also happens to be one of the best possible examples of what can take advantage of as much computer hardware as you can throw at it. This is true both for CPUs and GPUs.

On this page and next, we’re tackling many different renderers, because not all renderers behave the same. That will be proven in a few cases. If you don’t see a renderer that applies to you, it could to some degree in the future, should you decide to make a move – either to a different design suite, or different renderer plugin. An example: V-Ray supports more than just Autodesk’s 3ds Max that I test with; it also supports Cinema 4D, Maya, Rhino, SketchUp, and announced only just this week, Houdini.

Another cross-suite renderer? Only the best-named one: Arnold. 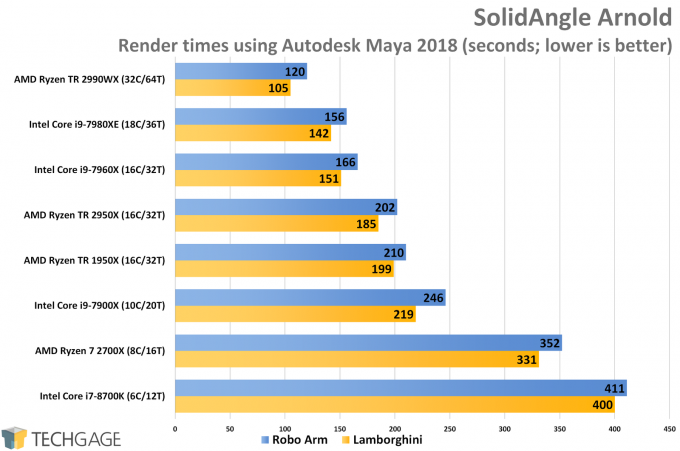 We’re off to a great start here. The projects used here, are ones I found online for free, so they may not be the most representative of more complex projects, but I think the point of scalability gets across. AMD’s 32-core wonder dominates in both renders here. The 2950X continues to deliver just a bit more performance than its older brother. 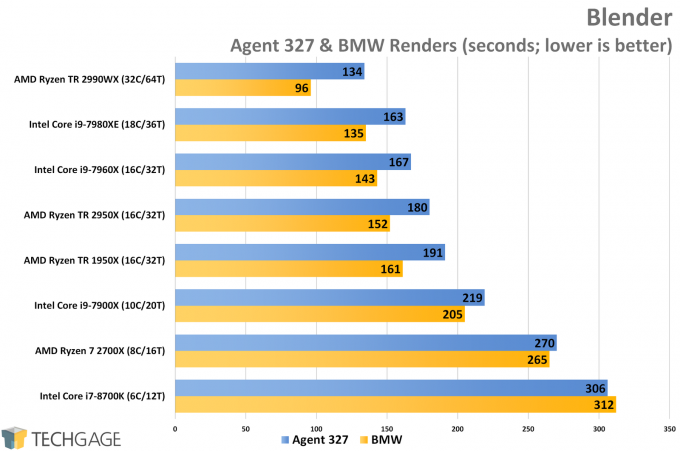 With Arnold, both tested projects showed a 15 second delta between them on the 2990WX, but with Blender, an even greater lead can be seen in the BMW scene. What’s a little funny about that is just how simple in design that project is in comparison to Agent 327, which was designed specifically to show off what Blender can do. Big or small, the projects will scale extremely well on beefier CPUs. 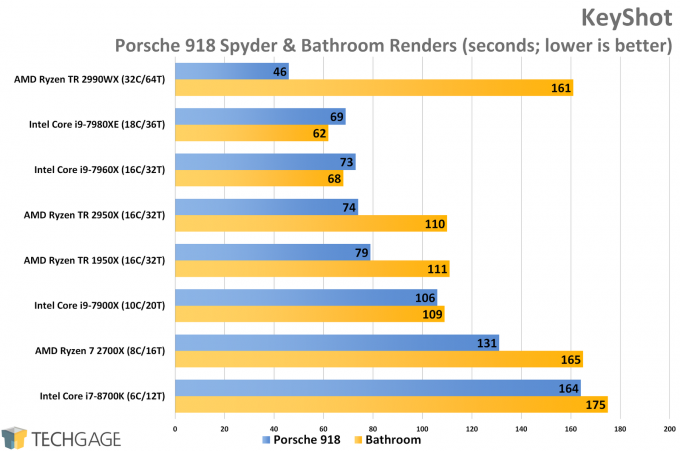 KeyShot is one of the coolest rendering applications I’ve ever touched, but it does give us some odd results with some chips. The Porsche model rendered pretty much as expected straight up the stack, but the interior render, which has many reflective surfaces, didn’t render very well on the 2990WX. Again, this is a hint that optimizations to the software could be made to take better advantage of these chips. This is highlighted by the fact that it isn’t an SMT issue, as the 16-core chips with SMT are faster than the 32-core 2990WX.

Really though. Download the KeyShot demo, a bunch of free scenes, and have some fun. 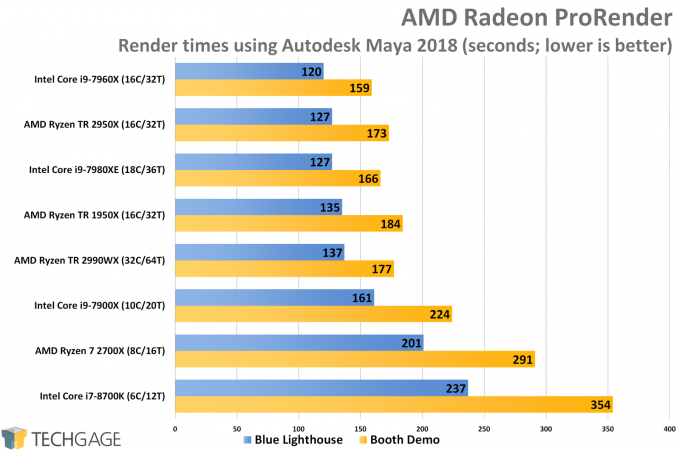 For some reason, AMD’s own Radeon ProRender doesn’t scale well with the new 32-core chip. I have tested multiple beta versions of the plugin (to be released this week), and nothing changed. I am not sure at this point if the issue is related to the Maya plugin, or the projects I’m using, but it’s unfortunate. Of all the renderers I expected to scale brilliantly on the 2990WX, it was this one. Again, highlighting the need for optimization going forward (32 cores is new territory outside of Xeon Phi CPUs). 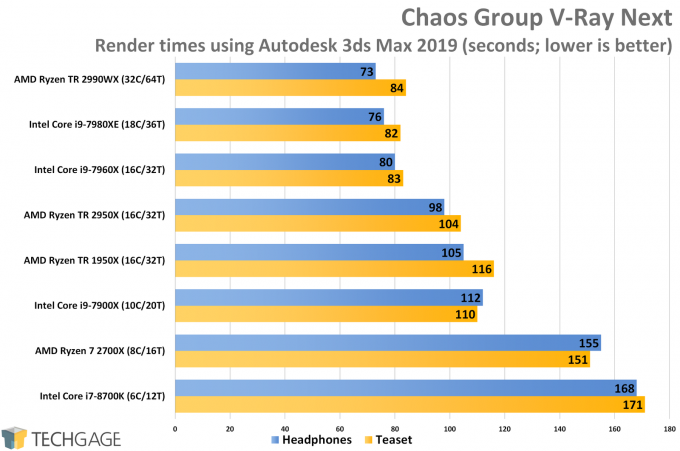 I took a look at V-Ray’s GPU Next renderer a few months ago, so it was nice to be able to test out the CPU version for this review, since it’s typically what most people will be using for production renders (GPU renderers are more commonly used during the design phase of a project for quick and dirty iterations).

Interestingly, V-Ray is the first renderer to not show much of a strength on the 2990WX, which is a bit of a shame as I was hoping for a lot more. What’s strange about this is that with the standalone benchmark, seen below, the gap is widened far more than it is above. 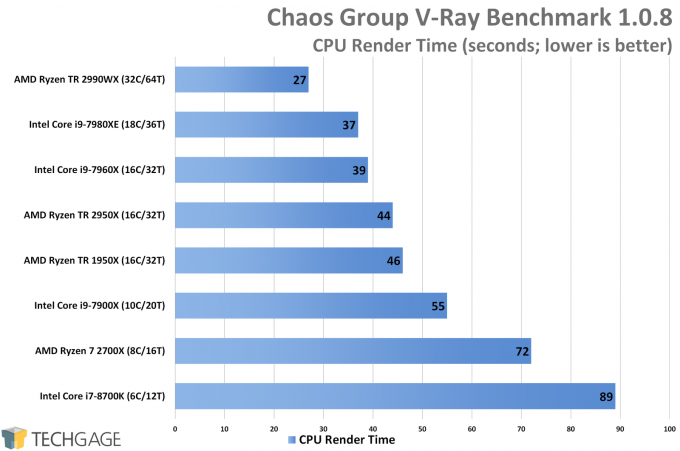 I am not sure why there’s such a discrepancy here, but with SIGGRAPH up next week, I think I have some questions for some of the excellent folk at Chaos Group.