Just as we were starting to believe that 16-core CPUs were amazing, AMD has come along and dropped a 32-core bombshell. It’s called Ryzen Threadripper 2990WX, a workstation chip that cuts through renderers like butter. We’re putting it up against the forthcoming 2950X, and six other unsuspecting processors.

On the previous pages, there were many encoders and renderers tackled, while on this page, Linux is going to help us tackle those same scenarios, among others. To do most of the testing here, I rely on Phoronix’s excellent Test Suite (PTS), which makes it super easy to test a wide-range of scenarios – not just for CPU or GPU, but also I/O and memory.

The OS acting as a base for testing is Ubuntu’s 18.04, which is left as stock as possible. The performance power profile is enforced before testing is undertaken, although on the 2990WX machine, the terminal kicked back that the file I usually echo to doesn’t exist. This is the only platform I’ve had this happen on, so it’s definitely related to the design of the chip, and I’d suspect EPYC would have generated the same kind of result. Nonetheless, it proved to not be important, based on HandBrake testing between the OSes (which were for the most part exact). 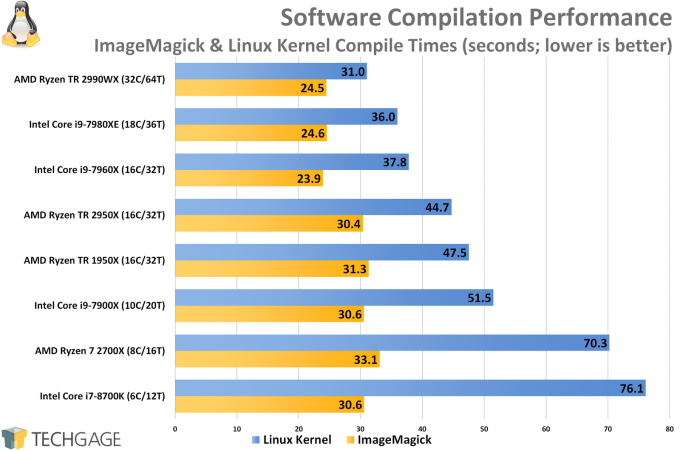 I’d have to be a real meathead to not start this page off with a compile benchmark, a test almost as de facto as SuperPi used to be (is it still?). As expected, AMD’s many cores helped it reach the top of the chart here, though Intel gives the chip a real run for its money with the ImageMagick compile. The kernel compiling in nearly 30 seconds really makes me want to haul out my overclocking hat. 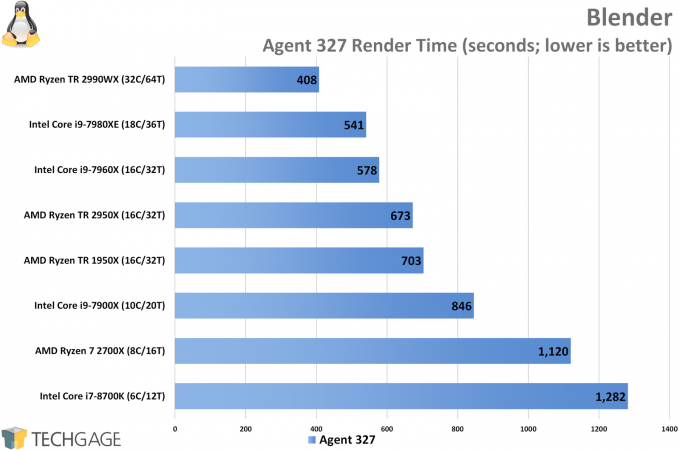 The use of this test might be a little redundant since I also use it for Windows testing, but PTS tests the same scene I use in a different, more thorough way, so it’s nice to have a second opinion. And, once again, the 2990WX really shines here. 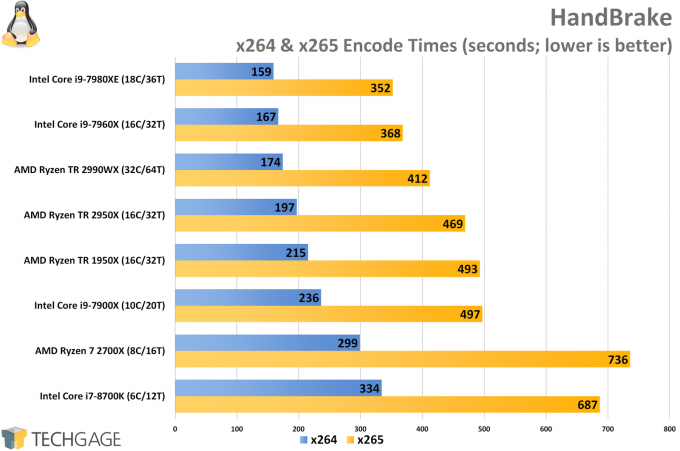 As I found out the hard way during testing and retesting, HandBrake 1.1.1 does not love AMD that much, as the encode times were much worse than Intel’s in Windows. Yet, I didn’t see that in Linux. After investigation, it turns out that 1.1.1 somehow introduced a change that dramatically impacted AMD performance. As an example, in Linux, the 2700X took 736 seconds for the x265 test, whereas in Windows, it took 1700.

1.1.0 does not have this issue, and that’s the version used for the testing above. Ubuntu’s repository doesn’t have 1.1.1, and that worked to my favor here, since it gave me actually usable results. Hopefully the next version of the application gets rid of this issue (please, devs?). 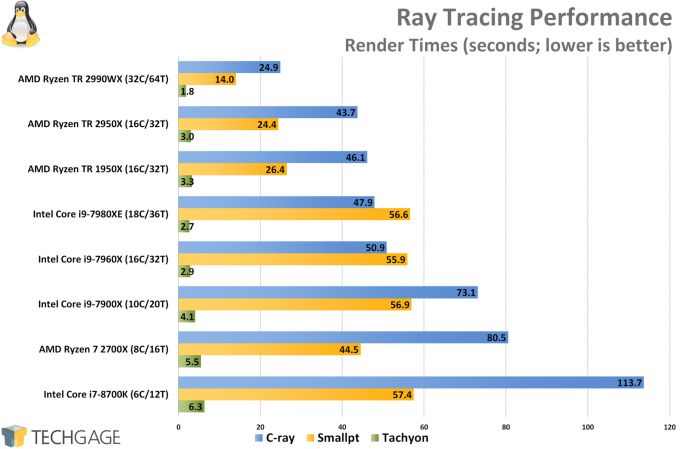 A benchmark that concludes in under 2 seconds might seem dumb, but is it reaaally when it still scales? A render is a render, after all, and they all scale pretty much infinitely if you want them to. In all three tests, the 2990WX’s raw horsepower is put to get use, and because Tachyon favors AMD somehow, the 2990WX is actually separated quite a bit from the 7980XE. A full 0.9s!!!

If you’ve never heard of these renderers, the information is still relevant to other ray tracing renderers, like AMD’s Radeon ProRender or Blender’s Cycles. 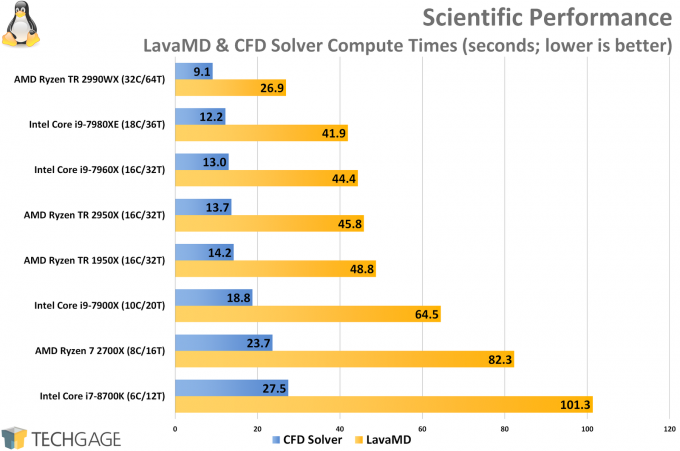 These tests represent some of the most grueling calculations, so it’s a true stress test, and one that fared well for AMD. The 2990WX performed well in the solver test, but that’s easy to ignore with the kinds of gains seen in the LavaMD one (it’s not a volcano health website; I looked). 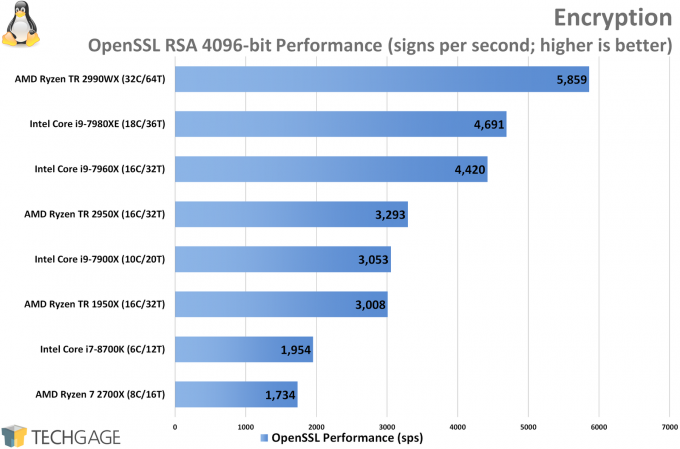 Continuing its reign at the top, the 2990WX pushes well ahead of the competition in the encryption test, one that’s normally Intel’s domain (as you can see by how far ahead the 7960X pulls ahead of the 2950X). 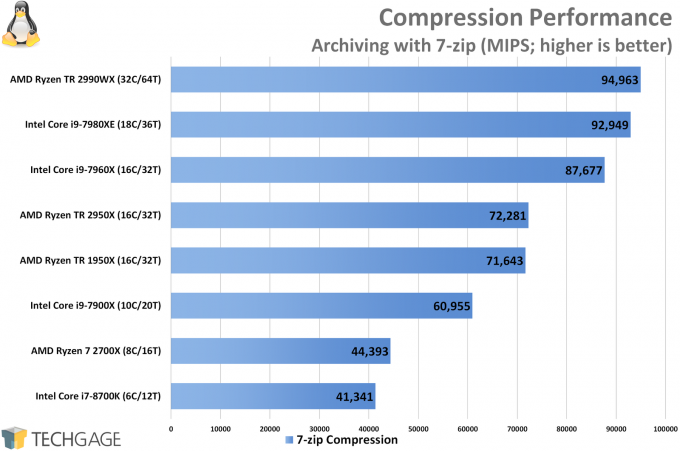 While the 2990WX killed it in the encryption test, it has to get by in the compression test by simply beating Intel by a few percentage points. That aside, it’s worth noting just how well compression can scale with processor cores. Most of us don’t spend our days compressing files, but it sure is nice to have it be as fast as it can be. 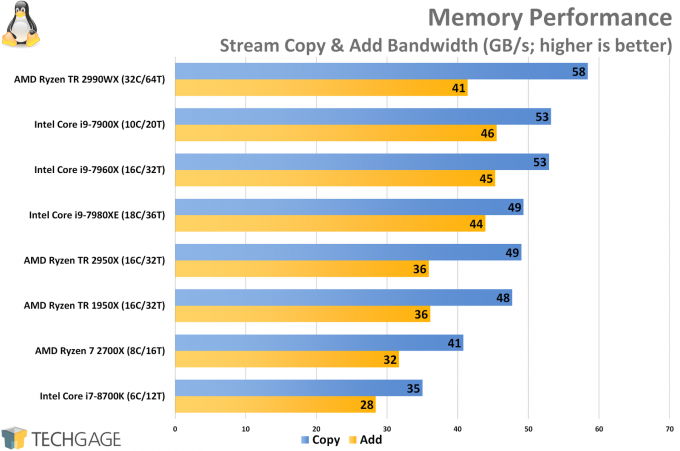 I debated whether or not it was important to include this set of results here, since it’s also covered on the following page with Sandra, but it actually does prove useful to show that not all benchmarks are built alike. Here, AMD’s 2990WX sits comfortably at the top, but as you’ll see on the following page, it’s actually Intel which does with Sandra’s take (probably thanks to the use of AVX-512).

Ultimately, memory is a very hard thing to gauge, and the results may not even affect your personal workload as much as you think it does. I’ve been tempted to do RAM scaling testing for a while, so I feel like this might be as good a reason to plan for it than any other.