The day many have been waiting for has arrived: AMD and Intel have officially launched their respective next-gen enthusiast processors. In this article, we’re going to follow-up on our 3950X Linux article from last week to introduce both Intel’s Core i9-10980XE and AMD’s Ryzen Threadripper 3960X and 3970X into the test results.

The previous pages have been focused on specific scenarios, like science, rendering, and compiling, so to wrap things up, this page is going to revolve around some more general scenarios, like encryption, compression, and memory bandwidth. For good measure, a chess engine even makes an appearance.

We’ve been lacking more single-threaded tests in the past, but have introduced some SciMark-sourced ones here. We’re still not sure if they are ideal, but they serve the purpose for now. As always, if you have a suggestion of another test we should implement, please leave a comment. 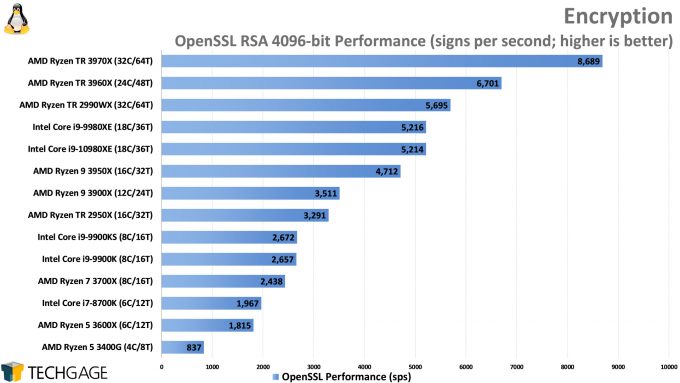 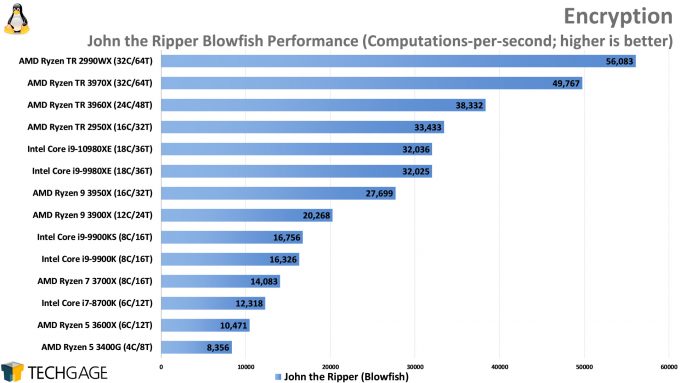 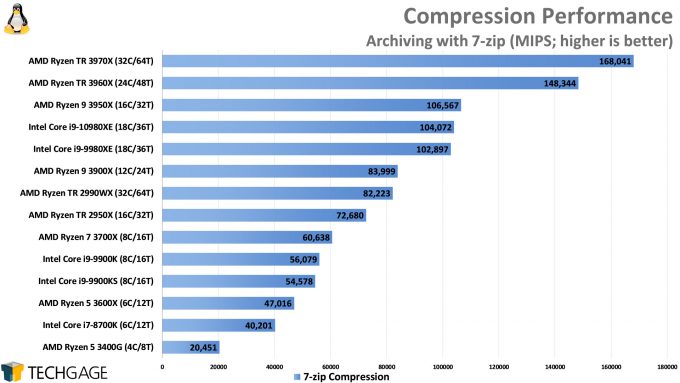 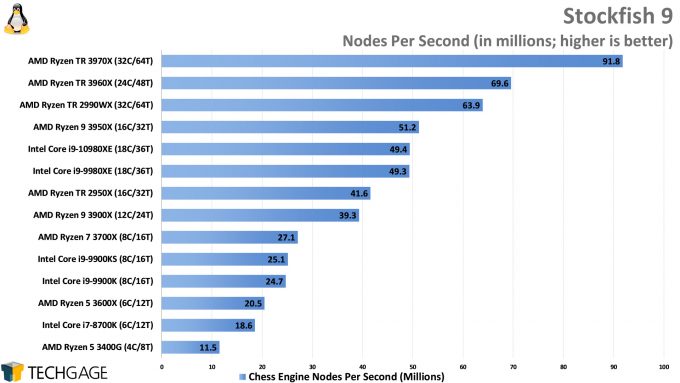 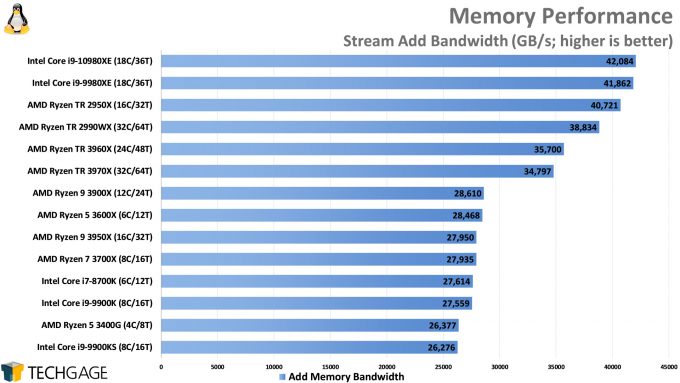 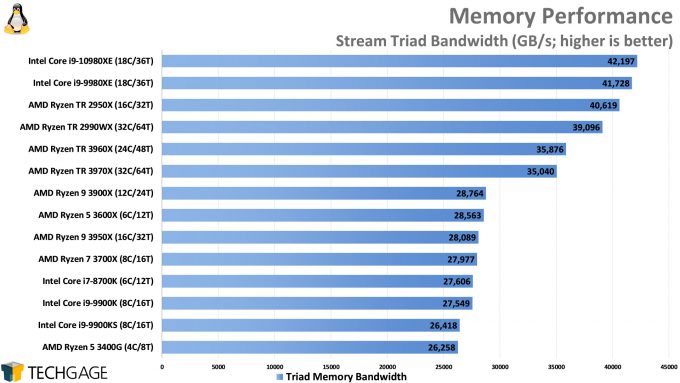 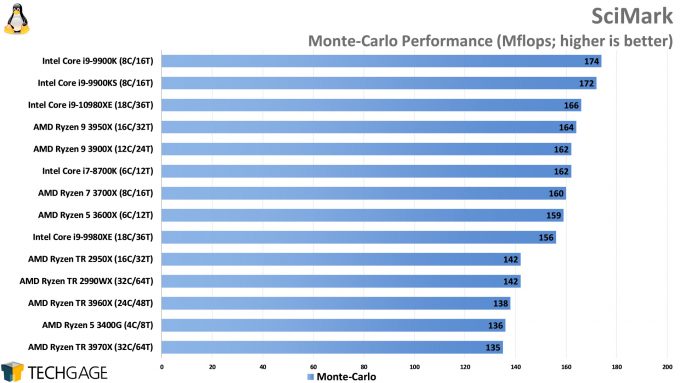 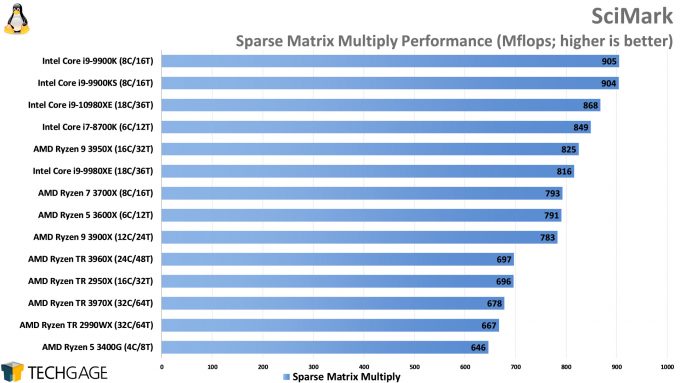 There’s a lot to look over here, considering we’re taking a look at not just one CPU, but three of them from two different vendors. Let’s start with the easiest of the two to talk about: Intel’s Core i9-10980XE.

This Cascade Lake-X chip is an interesting one, largely because it doesn’t exactly pull that far ahead of the outgoing 9980XE. In some cases, performance was actually worse on the newer chip, something that highlights just how close they are to performance. Both chips flip-flopped a lot throughout the review, leading us to feel that they are “the same”. At least roughly.

We’d be remiss to ignore the fact that the 10980XE does support up to 256GB of memory, double that of the 9980XE. It also bumps the officially rated memory speed to 2933, from 2666, although that’s not exactly easy to get excited over that when the new Threadrippers are spec’d for 3200. AMD included a DDR4-3600 kit with the review samples (not used for our apples-to-apples tests), highlighting how confident the company is in Zen 2 being able to handle higher-than-the-usual clocks. 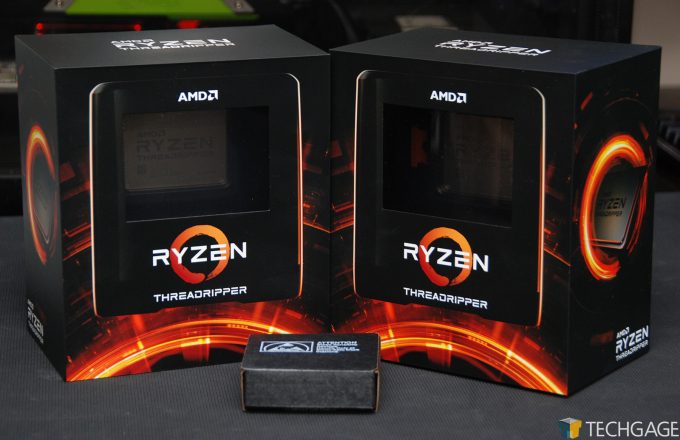 The biggest feature of Intel’s new chip is simply the fact that it costs just under $1,000. The last-gen 9980XE retailed for $2,000, so the AMD effect has definitely been felt, and it’s consumers who benefit. We’d wager Intel’s chip is still priced a bit high considering how close the 3950X gets to it (if not beating it in some cases), for $250 less. Market mindset is going to keep Intel safe for a while, but AMD seems to be rapidly changing things, quicker than normal.

And speaking of Threadripper, as we saw throughout most of the results here, the third-gen parts are a force to be reckoned with. We already have some Windows testing completed, and we can give a quick example of how the new 32-core scores over 16,000 in Cinebench’s multi-thread score, while the old one hit about 11,500. Plus, the new generation has the ability to use even faster memory than the old one, which in our tests does in fact improve things further in some cases.

As always, what processor is right for you depends entirely on whichever workloads are important to you. If we don’t cover the one that you care about, please let us know. We do have a couple of suggestions already to add, and will do so the next time we update our suite (this current update is not even a month old!).

Simply put, the new 32-core Threadripper 3970X impresses the hell out of us. When we ran the first test and saw its result in comparison to the last-gen 32-core, our mouths literally dropped. We didn’t expect as many gains as we saw, especially on the rendering front. We definitely expected improvements with encoding, due to an improved memory design, but what we’re actually seeing is improvements all over the place. The 24-core likewise shows great performance, and while we didn’t have the last-gen 24-core in our charts here for comparison, we can tell from the 32 vs. 32 core comparison that big improvements have been made here. NUMA mode handling has also been improved greatly, although there are still some software tweaks that can be made to fully utilize Threadripper.

The new 32-core costs $200 more ($2,000) than the last-gen part, and that had some scratching their heads. How could AMD actually raise prices? Well, considering how that last-gen part has an internal design that detrimentally impacted certain workloads, and the new one doesn’t have those issues, and it also greatly improves the architecture – the newest Threadripper processors are absolute powerhouses.