In an age where computers and hardware are getting bigger and faster, there’s a recurring problem: The new part is hotter than the last. This is not always the case, but I have to laugh at my Intel 820 D, a 110W chip, that hits 70°C at 4.0GHz with water cooling. Needless to say, Intels are known for being hot to begin with, but that’s ridiculous! AMD on the other hand though, have never been as bad as that, but that doesn’t mean what’s there is perfect either. Dual core CPU’s in general will get far hotter than a single core, sometimes near twice as hot.

Heat is not the only reason Energy Efficient processors are beneficial though. Power consumption is on the rise, and anything to help ease the pain on the power bill is welcomed. Simply looking around any e-tailer today, you will see 1000W power supplies by numerous companies. This is the direction we are going, and anyway you look at it, 1000W is a lot of freaking power.

Both Intel and AMD have been doing incredible jobs at weaning the overall power requirements for their CPU’s down. Intel has even had 1.0GHz chips that only used 5W of power at 100% load. If that’s the future… then it’s going to make things much easier for the consumer… both for the wallet and the room temperature ;-)

Shortly after AM2 was launched in May, AMD released three different versions of the entry-level X2, the 3800+. The standard chip, like the other non-EEs, runs with 89W. Even that is not so bad when considering the 4600+ 939 version is rated for 110W. However, it gets even better due to the fact that there is also a 65W and 35W version of the 3800+. If only we could get the rest of the line down to 35W!

Recently, I wanted to purchase an AM2 machine primarily for memory benchmarking. The on-die memory controller is by far the best out there today; it can really push memory bandwidth records to the next level. When the time came to purchase, I decided on the EE for one reason, and one reason only. I had figured with a lower power/voltage requirement, the chip would likely have better chance of success during overclocking. I am not quite sure if this is true, but I will touch up more on this in the overclocking section. 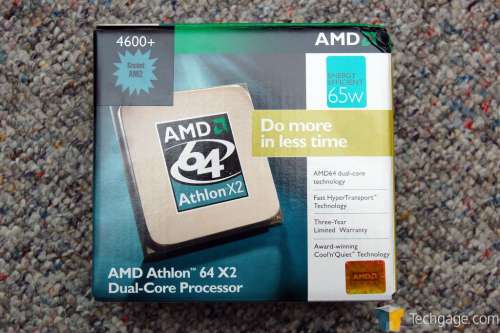 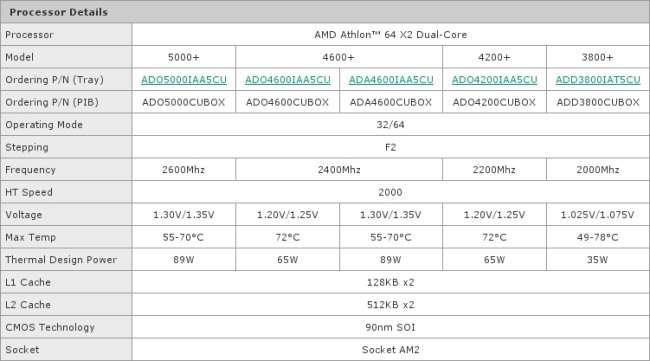 Besides clock speed differences, we can see the normal chips (5000, 4600) have a 89W power requirement, and the EE’s, with the exception of the 3800+, use 65W. Due to the different thermal design, the 4600+ EE has a higher max temp of 72°C. This is a good thing, as I have had this chip run that high on the stock cooler. The most notable thing here is that the 4600+ requires 1.20vcore, while the standard 4600+ requires 1.30vcore. If anyone out there has a standard 4600+ and has run it on 1.20vcore reliably, please let me know. I am curious as to whether the EEs actually have a greater advantage in this regard.