For some real world testing, I used LAME MP3 encoding and also DVD re-encoding. First, I ripped the first CD from DJ Tiestos latest album, In Search of Sunrise 5, as a single .WAV file, which weighed in at around 800MB. I then used both LAME and LAME MT (Multi-Threading) to convert it. The command I used was lame -b 320 *.wav *.mp3. Simple.

For DVD re-encoding, I took my Bad Religion – Live At The Palladium concert DVD and re-encoded it using Nero Recode. I took a real world scenario of backing up a DVD… I took the regular 8.7GB DVD and compressed it to 4.5GB so that it would fit on a normal DVD-R. The test only counts the time it takes to recode the movie, not the time it took to rip it first. Happily enough, both LAME and Nero keep track of the time for the process, so figuring out the final values was easy. All results in the graph are in seconds, and lower of course is better.

The results are pretty clear. We experienced a 14% increase in LAME, 13.5% in LAME MT and 10.5% in Nero. The stock performance was also nice, but a simple overclock easily adds 10% – 15% performance increase, which is welcomed if you are working on larger projects. 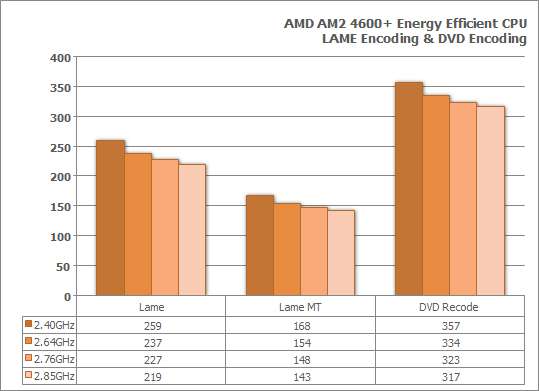 For a gaming test, I used one of my favorite games, Half-Life 2. I choose this game, because it’s very CPU dependant, and also quick to get into. The fact that I’ve played through it multiple times also helps. I ran the game with a 1024*768 resolution with default settings (0x AA, 0x AF), and used FRAPS to record the average and minimum frames per second. Each run is manually played through, no timedemos are used. Due to this, each run will always be different than the last, but this gives a real world result. I used d1_canals_07 as the level of choice.

If you don’t believe that HL2 relies heavily on the CPU, here is a graph to debunk any doubts. Our overclock gained us just under a 16% performance increase. 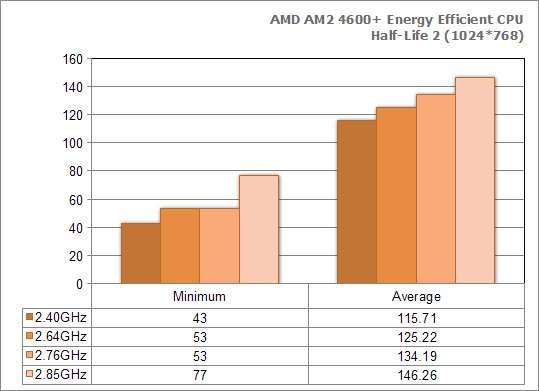 Overall, I am impressed by the results seen today, although all were expected. In some of the tests, such as Sandra and Lame MT, it’s clear how beneficial the extra core can be. Overall though, I can’t say I am particularly impressed by this specific model, overclocking aside. But, it all depends on how you judge things.

I never, ever buy a CPU and don’t plan to overclock it, but there are many out there who will indeed buy a $1,000 chip instead of overclocking a $300 one. That being said, as it stands, this 2.4GHz DC processor is great. The fact that it requires less voltage than a regular 4600+ makes it better suitable for many people. It should aide in a lower power bill and also heat. Of course in the Winter it could actually pay off heating your house with a dual core CPU instead of the heaters.

From an overclocker/performance perspective, there are better CPU’s to choose from. Energy Efficient aside, there are cheaper X2’s that should perform just as well. One friend has an AM2 4000+ that is stable overclocked to 3.0GHz with 1.45v. Clearly, he wound up with a better chip than I did! Though 4000+’s are hard to find now, the 4200+’s are not. Comparing the non-EE 4600+ to the 4200+ on a popular e-tailer proved $79 more expensive. Now, this is not a big deal, really. However, for the $79 you save, you should still be able to get some great clocks out of this thing, and could likely even beat the max stable I have acquired with this chip here.

If you are really money conscious, then it may pay off to take a look at the 3800+ X2 also, which retails for around $150US. In the end, there is a lot of choice, which is a good thing. The entire line of X2’s are well priced, but if you are to buy one now, I’d recommend either the 3800+ or 4200+. As for EE chips, I would recommend one only if you plan using at stock speeds. As we have found, the fact of EE didn’t seem to help in our overclocking results of the 4600+.