by Rob Williams on February 17, 2006 in Motherboards, Processors

There has not been that much info released about the AM2 yet, but there is enough to cover. Will this be a CPU that we should wait for before building another system? Let’s take a look at what we know so far and see.

Ever since I first heard that the AM2 would support DDR2 memory modules, I was instantly enticed. Usually when I hear about a new socket release, it’s a matter of it being faster with the addition of ‘small’ new technology additions. The addition of DDR2 support is a huge deal though, because Intel currently rules that market… only because it has no competition.

At the beginning of this month, Tweakers.net posted some leaked pictures of the new MSI board, tentatively called the K9N Premium, which seemed to make perfect sense, since the M2 is still technically a K9 (Not the pup!). One very interesting picture there was the close-up of the socket itself, which when counted does indeed equal 940 pins. Though, the 4 ‘notches’ on the socket are displaced differently than current socket 940 motherboards which means that current S940 Opterons will not work in the new motherboard. Since the current Opteron memory controller cannot handle DDR2 memory, it only makes sense that they designed it differently so that a mistake could not be made by installing the wrong CPU.

Speaking of DDR2, The Inquirer posted a very interesting tidbit… that the AM2 will officially support modules equipped with PC2-6400 (DDR2-800) speeds. This in itself one-ups Intel due to the fact they currently only officially support PC2-5400 (DDR667) speeds. This does not mean much in the sense that AMD’s will be faster, because Intel’s can handle DDR2-800 just fine, just not officially. This information shows that AMD is confident in the fact that the AM2’s memory controller will handle DDR2 better than Intel’s current controller, or we may assume. 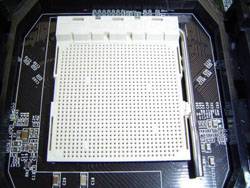 One major thing many people are interested in, of course, is whether in fact the DDR2 will perform better on the AM2 than on current Intel’s. Even with DDR1 as it stands, Intel sometimes does have a hard time keeping up in term of bandwidth and latency. With AM2’s memory controller, there’s no real doubt that it will indeed perform better. That’s not a fanboi comment either, it’s obvious that DDR2 does not blow anyone’s socks off as it stands, so hopefully with AM2, it could happen.

One thing we won’t immediately see is DDR2 modules with tighter timings due to the limits on the modules themselves. One thing that could potentially happen, however, is companies releasing modules specifically for AM2 which could utilize the memory controller to make tighter timings possible. This of course is dependent on whether or not the AM2 controller will indeed be ‘better’ than Intel’s current incarnation.

Another question I constantly have in my mind (ok not that much), is whether the final socket will still be named AM2. On the leaked MSI motherboard pictures, it does say M2 on the socket. Why would it say M2 if it’s AM2?

Both leaked motherboard pictures have shown a new CPU cooling mounting bracket also, and this is something that I find great interest in. The problem is, it appears much larger than current brackets on any motherboard, which is odd because the CPU size has not changed in the least. So is this to say that the AM2 will generate that much more heat, that we will need massive new coolers to accommodate them? 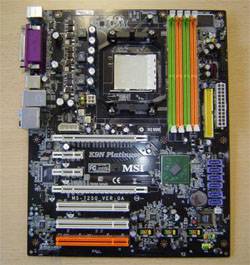 As far as we know right now, the AM2 CPU’s will not differ that greatly from current Venice, San Diego, etcetera CPU’s. Nobody knows for sure yet, but chances are great that the speed of a 3200+ Venice and 3200+ AM2 will be quite similar, because I doubt we will see 3.0GHz speed just because of the new socket. Now, if the case is that the chip will not generate anymore heat, then the newly designed socket will be a very odd step for AMD to take.

If the bracket is changed that drastically, then that would mean no current after market CPU coolers or water blocks will fit it. The AM2 bracket has one tab on each end for the cooler clip to attach to, whereas the current S939 and S940 brackets have two on one side and three on the other. Why would AMD change the bracket when it will require a completely new clip… that only makes it harder on the consumer and companies who must produce a completely separate cooler or clip.

A few companies have told me about new AM2 coolers they are developing, but I am still unsure of whether it’s a matter of changing the clip or the cooler itself, but hopefully we will see more info soon. Since none of these leaked pictures actually included the cooler, it’s hard to figure it out right now.

The last bit of useful information we have seen was brought to our attention by The Inquirer again. They note that the 5000+ and FX62, both dual core, will be unveiled at Computex. Since Computex is in June, it fits right along the rumored timeline. Also, since the FX60 is currently the best gamers Dual Core available, it would only make sense that they would try to pimp off the next best chip with the new socket. One last, and somewhat funny fact: If AMD does unveil the chip at Computex, the date will fall on June 06, 06. Or, 6/6/6. Scary? Not really, but funny nonetheless.

While all that seems beneficial to the AM2 right now is the DDR2 support, I am hoping that we will learn more specifically about the frequencies on the chips in addition to how they will compare with today’s Venice/Sandy/Venus. Needless to say, I would not wait for the AM2 if you need to build a system now. If you have time to wait, then you will do no harm by waiting to see how the new chips perform. If you have any conspiracy theories or comments, please feel free to post them in our forums!