For the sake of CPU stress-testing, we use IntelBurnTest, for reasons I’ve laid out in a recent forum thread. Compared to other popular CPU stress-testers, IBT’s tests are far more gruelling, and proof of that is seen by the fact that it manages to heat the CPU up to 20°C hotter than competing applications, like SP2004. Also, despite its name, IntelBurnTest is just as effective on AMD processors. Generally, if the CPU survives the first half-hour of this stress, there’s a good chance that it’s mostly stable, but I strive for a 12 hour stress as long as time permits.

Contrary to my heading above, I won’t be talking much about the X4 810, simply because I didn’t spend near as much time overclocking it as I did the X3. Like most AMD Quad-Cores, it just didn’t want to overclock too far, and after finding a stable clock of 2.99GHz, I was unable to push it any further, even with a few hours worth of tweaking. Adding 400MHz to the CPU is nice, but I really don’t think the time invested really makes it worthwhile.

The X3 720 on the other hand is far different. Similar to Dual-Cores, it was a breeze to overclock, and we even managed to push it 400MHz above stock without touching a single piece of voltage, as seen in the image below: 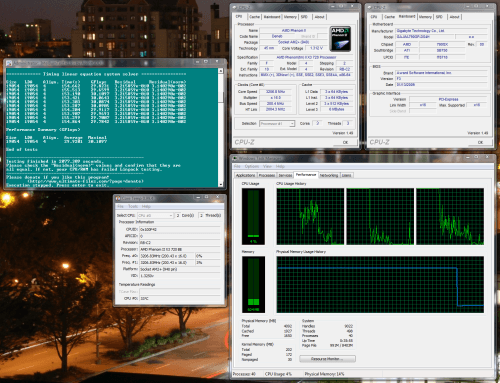 That overclock isn’t one to brag about though, because achieving it required next-to-nothing in terms of tweaking. To push the CPU even further though, it became quite a challenge. I’m unsure if temps became an issue at the top-end, or the fact that the CPU just has a hard-limit. Either way, my top stable overclock proved to be 3.50GHz, which required a bump of 0.075v, to settle in at 1.40v: 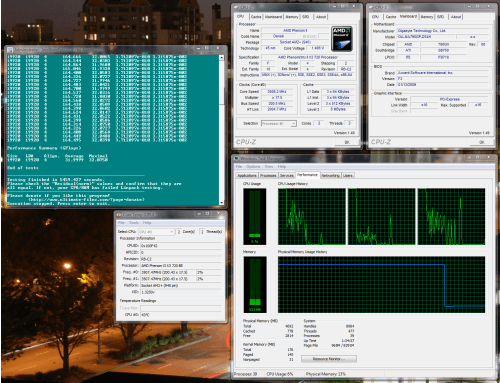 Due to time constraints, I wasn’t able to put these chips through gruelling half-day stress-tests, but with what we’ve accomplished here, I’m rather confident these are indeed stable. IntelBurnTest is such a hardcore CPU tester, that normally any instabilities are found out about in under the first five iterations. If you get past ten, you are likely going to soar through to infinity.