A quick note on methodology: SYSmark 2007 requires a clean install of Windows Vista 64-bit to run optimally. Before any testing is conducted, the hard drive is first wiped clean, and then a fresh Windows installation is conducted, then lastly, the necessary hardware drivers are installed. The ‘Three Iterations’ test suite is run, with the ‘Conditioning Run’ setting enabled. Then the results from the three runs are averaged and rounded up or down to the next whole number. 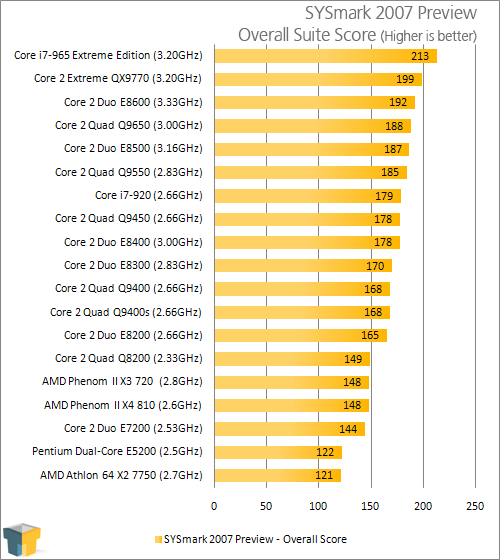 As far as SYSmark is concerned, the X3 720 and X4 810 are equals. Common logic would tell you otherwise, but as it seems, SYSmark doesn’t swamp the PC with multi-threaded applications constantly, which helped the X3 720 pull ahead in single-threaded segments. The results are quite similar to what many people would experience however. If you are not a major multi-tasker, an extra core on your Quad-Core may very well go to waste (for what it’s worth, the same could be said about a Tri-Core or Dual-Core in some cases).

Although SYSmark delivers fairly accurate results where real-world scenarios are concerned, it is a bit disconcerting to see an E8600 outperform a Q9650. So, let’s see how AMD’s latest creations handle our real-world tests, compared to Intel’s direct competitors.