For the sake of CPU stress-testing, we use IntelBurnTest, for reasons I’ve laid out in a recent forum thread. Compared to other popular CPU stress-testers, IBT’s tests are far more gruelling, and proof of that is seen by the fact that it manages to heat the CPU up to 20°C hotter than competing applications, like SP2004. Also, despite its name, IntelBurnTest is just as effective on AMD processors. Generally, if the CPU survives the first half-hour of this stress, there’s a good chance that it’s mostly stable, but I strive for a 12 hour stress as long as time permits.

Our overclocking results for the 955 are a little brief, because I hit a cap rather quickly. The problem was simple… the CPU was overheating far too quickly, and as a result, I had to stop at 3.5GHz. While running OCCT, the test would have to halt itself within three minutes due to heat. Whether or not this was due to an incapable CPU cooler (Thermaltake V1) or not, I’m unsure, but that cooler has served us well in the past. 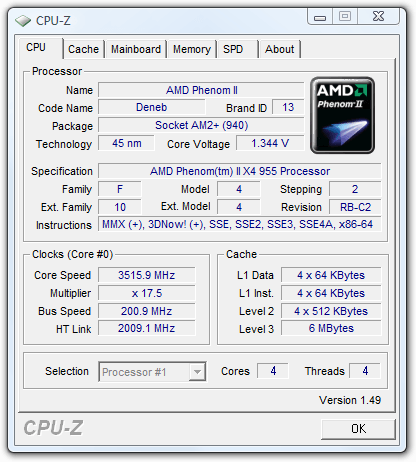 I can’t conclude that this is the top-overclock the chip can handle, because I’m certain it isn’t. If you have a robust cooling solution, you’ll no doubt go higher. For me, even lowering the voltages didn’t help the temperature enough, nor was that any more stable. To get this 300MHz boost though, I didn’t have to change a single voltage, at all. Overclocking made easy… stock voltage and and a low ceiling!