With its HD 5800 series launch last fall, AMD also brought to the table its Eyefinity multi-monitor technology. Right out of the box, gamers were able to hook up three monitors to a single card and enjoy multi-monitor gaming the way it was meant to be. With its HD 6800 series launch, the company takes things just a bit further, by allowing up to six monitors to be connected to a single card.

Below, you can see all of the available ports, with the selection mimicking the HD 5000 series of cards quite a bit. 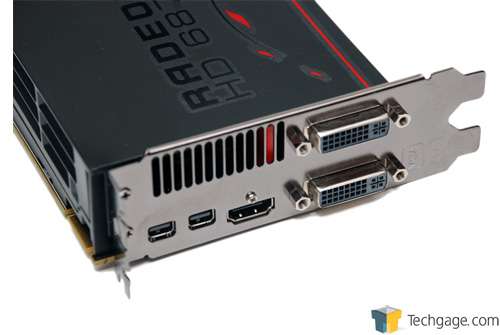 “But there are only five connectors!” You are correct, and here’s where the caveat comes in. You’ll note that rather than a single DisplayPort connector, there’s two Mini DisplayPort connectors instead. Each of these will support up to three monitors by themselves, but you’ll need a standalone hub for each. The unfortunate thing is that these suckers are not cheap, at around $150. For those who need six displays, though, this price might be a non-issue. Fortunately, for those who want to use only a 3×1 monitor setup (*raises hand*), no hub is required… only a mini-DP to DP cable.

Here’s a better look at the HD 6870 cooler. The rear of the cooler is to the left, and as mentioned before, there’s no immediate ventilation. On the opposite end, there are plastic curves to allow room for the display connector housing. Unfortunately, I couldn’t seem to get the cooler broken down more than this (it’s a tricky one), but the overall cooler design isn’t too unusual. It features a wide copper base, three heatpipes and lots of fins. 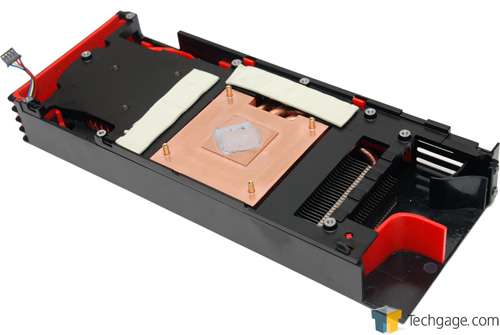 Let’s finish things off with a look at the naked card, which for the most part, doesn’t look too far different than the HD 5800 offerings. 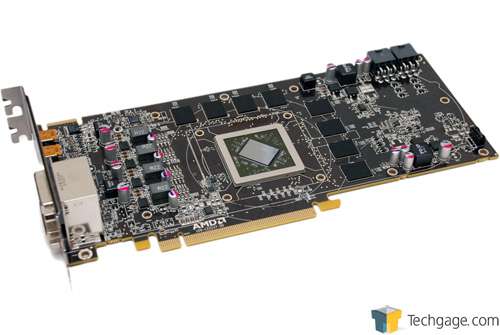 Before we dive into some performance testing, let’s take a quick look at the architecture diagram for the HD 6800, which for the most part doesn’t look to differ too much, but there are some things to point out. 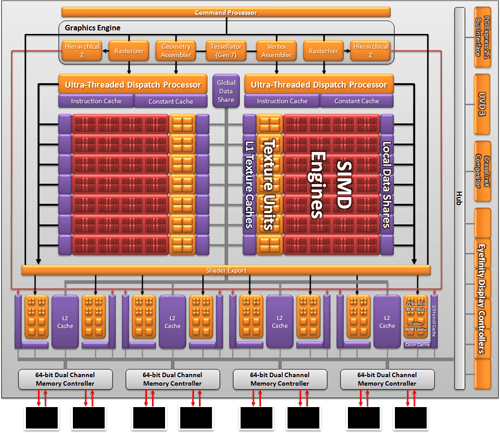 Though we’re not going to touch up on it in this article, AMD’s UVD engine has been upgraded to UVD 3, and likewise, the tessellator engine has also been upgraded to what AMD calls “Gen 7”. Rather than have a single Ultra-Threaded Dispatch Processor (accelerates threading for different data types), AMD has dedicated one to each of its SIMD units, improving efficiency overall. At the same time, there’s been further refinement for the cache as well, with some dedicated to each one of these units.

Aside from core counts, there hasn’t been much changed architecture-wise from this diagram alone. This and other more minor things aside, AMD looks to have done quite well in increasing the efficiency from both a power and performance standpoint on its HD 6800 cards.

We’re just about at our test results! Please take a moment to review our test suite and methodology on the following page, and then we’ll dive right into Dirt 2 performance on page 5.