To help fill out the mid-range GPU segment, both AMD and NVIDIA released models last week that directly compete with each other. NVIDIA’s solution is the GeForce GTX 560 Ti, a card that reintroduces the legendary “Ti” branding and one that the company hopes will become “the next 8800 GT”.

On AMD’s side, the company took its Radeon HD 6950 2GB and dropped it down to 1GB, in order to improve pricing, and of course to better compete with NVIDIA’s latest release.

In our look at NVIDIA’s latest card, we surmised in our final thoughts that AMD at this point in time is a bit ahead of NVIDIA when both performance and pricing are taken into consideration. Throughout all of our tests, AMD’s card was consistently faster, at around +10% on average, and for a $20 premium ($270), it seemed to be a winner. Not to mention, AMD’s offering is also more power efficient and runs a bit cooler.

Soon, we’ll be taking a look at both cards again from an overclocking perspective, since when both cards are pushed to their max, the end results could change quite a bit. But for this article, we’re going to be taking a look at AMD’s latest Radeon HD 6950 1GB, and compare it throughout to the 2GB version, which we re-benchmarked using the latest 11.1 Catalyst driver.

Before we dive into a look at the card and also our results, let’s recap AMD’s current line-up:

As AMD has released four different models from its Radeon HD 6000 series over the course of the past couple of months, not all of the models listed above would make the most sense for purchase today. Of course, pricing comes into consideration there, but for the most part, AMD is focusing on its HD 6000 series, and unless you can get cards from the HD 5000 series for an unbeatable price, it’s best to look forward.

For our testing, AMD sent us a generic-looking sample… one that came complete with “ATI” branding and production tag, and didn’t even include the name on the card face. For that reason, I’m opting to show off stock images instead, as they simply look better. Our sample features an identical design; its aesthetic features are just a bit different. 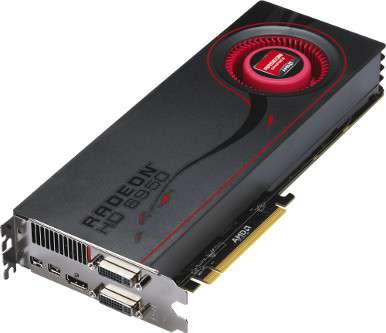 Although the card we’re looking at here includes less memory than the original HD 6950, it doesn’t seem that power metrics changed much at all. AMD still recommends at least a 500W power supply to power one, and 700W could be assumed for CrossFireX. 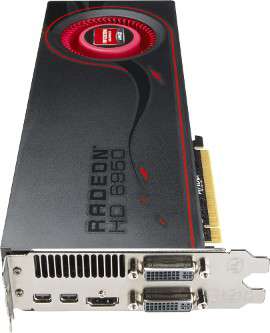 Like the others from the HD 6000 series, this card includes two DVI ports, an HDMI port and two mini-DisplayPort ports. Out of the box, you can use up to four displays with this card, but with a DisplayPort extender, you could bump that up to six.

On the following page, we’ll take a quick look at our test machine and our methodologies, and then jump straight into our test results after that.