Like most others in recent years, 2010 was an interesting one where graphics cards were concerned. AMD dominated the scene in terms of performance/$ to kick things off, and then NVIDIA delivered the most powerful single-GPU solution in the springtime with its GeForce GTX 400 series. Fast-forward to the late fall, and NVIDIA followed-up its big launch with GTX 500 cards. The GTX 580 in particular helped reaffirm NVIDIA as the performance leader, so what’s an AMD to do?

Close up 2010 with an interesting launch, of course. I’d give some belated long introduction here, but there’s not much need. AMD’s HD 6900 Radeon series (Cayman) launch hasn’t been the best-kept secret, and there are few who wouldn’t have seen it coming. What matters is whether or not it can help put AMD back on top in terms of raw performance, rather than win on pricing.

Has it? That’s what we’re going to find out here, but even if not, AMD has created some interesting options. The company has stated that the HD 6970 best competes with NVIDIA’s GeForce GTX 570, so right away we can get an idea of what to expect. The HD 6950? Well, that’s a card in a class of its own – literally. NVIDIA doesn’t have an offering at the current time to compete from a pricing standpoint, which isn’t a situation we run into all too often. 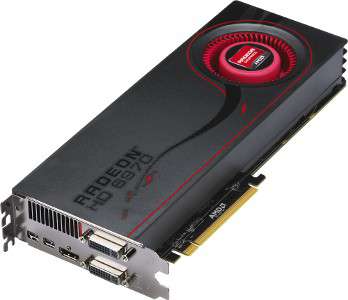 The Radeon HD 6900 GPUs were originally destined to be built on a 32nm process, but due to technical problems within AMD’s fabricator, TSMC, it was forced to stick with 40nm. As a result, we’re not going to see incredible performance gains here, but we do see gains nonetheless, along with other enhancements.

Because AMD was forced to stick with 40nm, it decided to focus more on feature and architecture enhancements than the adding of more SIMD engines and cores. Much of what was introduced with the HD 6800 is again brought back here, but with additional upgrades which we’ll tackle on the following page. Priced at $299 for the HD 6950 and $369 for the HD 6970, AMD’s highest-end single-GPU card could still be considered affordable – at least, much more so than the $500 GeForce GTX 580 from NVIDIA.

Compared to the HD 6870, the HD 6970 has a lighter clock speed, but it increases the core count to 1,536, from 1,120 – a 37% increase. At the same time, GDDR5 clocks have been boosted to 1,350MHz, from 1,050MHz. Overall, nice increases, but it’s all made even better by the fact that AMD has supplied both of its HD 6900 cards with 2GB of memory, up from 1GB. This should be welcome by those who both run high resolutions and high detail settings. It can be assumed that NVIDIA’s next-gen GPUs will also use 2GB of GDDR.

Proving sufficient once again, we’re opting to utilize AMD’s stock images, since they are spot on with the actual product. Both the HD 6970 and HD 6950 are -identical- to look at aside from the name pasted on. Both weigh about the same, are just as long, feature the same video outputs, and so forth. The differences boil down to the chip and the BIOS. 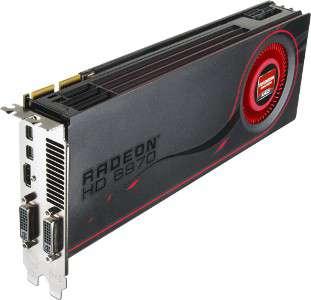 AMD introduced 5x display output support with the HD 6800 series, and that returns as expected with this series. The included outputs are 2x DVI, 1x HDMI, and 2x mini-DP (DisplayPort). The DisplayPort ports can be used in conjunction with an expander hub to support up to six displays off of the two ports. This is helpful for those looking to take that route, but unlike the “Eyefinity 6” edition we saw with the last generation of cards, the requirement of a hub here isn’t desirable, as they run around $100.

Both cards require a PSU of around 550W, and for the sake of CrossFireX, about 200W could be added on top of that. The HD 6970 requires an 8-pin and 6-pin PCIe power connector, while the HD 6950 can get by with two 6-pin PCIe connectors.

On the next page, we’ll talk a bit about what AMD has brought to the table with its HD 6900 series, and then we’ll get straight into a look at the performance.