With the launch of its Radeon HD 4000 series in the summer of 2008, AMD kick-started what was to become a long ride of frustration for NVIDIA. Out of nowhere, AMD struck out with its first truly competitive offering after a long drought, and to make things even worse for NVIDIA, it successfully followed-up to that launch with another, featuring the HD 5000 series.

Throughout the life-cycles for both the HD 4000 and HD 5000 series, NVIDIA worked hard to make sure it could wipe the grin off the faces of everyone at AMD’s Radeon department, and did so to some degree with the launch of the fastest single-GPU model last spring, the GeForce GTX 480. It was a launch that wasn’t without issue, but suffice to say, NVIDIA regained its performance crown.

After fixing various issues with its Fermi architecture, NVIDIA rolled out yet another definitive high-end model, the GeForce GTX 580. At around the same time, AMD launched its Radeon HD 6000 series, and its focus seemed to change from that of “we need more performance!!!” to, “we need more features!”. A bit depressing for the high-end enthusiast.

But, don’t fret! With today’s launch of AMD’s Radeon HD 6990, the race to produce the world’s fastest graphics card is back on, and we can confidently say that A) AMD has it and B) It’ll be interesting to see NVIDIA’s reaction.

Are you impressed to see a dual-GPU single-card offering from AMD launching in the form of the Radeon HD 6990? Of course not. At least, not unless you’ve been living under a desk in NVIDIA’s marketing department. Yes, like most other GPUs that have launched in recent years, this one was hardly a secret, but what still might take some people by surprise is just how long it’s taken to get here. 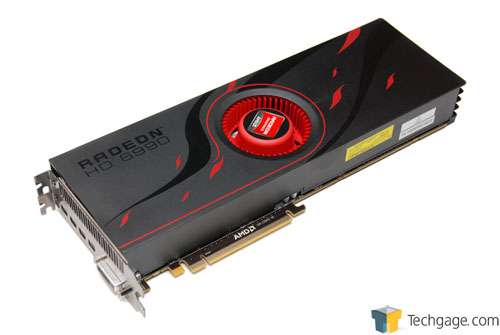 Although AMD’s never given us a definitive launch date for its HD 6990, it’s long been rumored that it was supposed to come out in the fall of 2010. Why the hold up? It could be speculated that there were manufacturing issues, but that’s unlikely. It could also be speculated that AMD didn’t want to hurt the sales of its current cards. Also unlikely, since it’ll be a rare day when a $500+ card will ever hurt the sale of a <$360 one.

The most probable reason for the ‘delay’ is that AMD didn’t see an immediate need to rush its highest-end offering out the door, but instead preferred to keep it baking in the oven so that when it did launch, it’d prove as impressive as could be. Has the company succeeded? Well, without jumping to conclusions on the first page of our article… what else would you expect from a $699 USD offering?

The table above summarizes AMD’s entire Radeon HD 6000 line-up, which up to this point has been left devoid of low-end offerings. Since the first HD 6000 cards launched close to four months ago, it shouldn’t be too much longer before we see the bottom-end of the series get filled out a little.

From a technical standpoint, a single HD 6990 is about on par with 2 x HD 6970. Both configurations feature the same number of cores, memory, ROPs and so forth. The individual die sizes are the same, as are the number of transistors per. So, we can in essence expect the performance from the HD 6990 to be about the same as two HD 6970s in CrossFireX.

Compared to the previous dual-GPU/single card champion, the Radeon HD 5970, the HD 6990 has a number of improvements. From a performance perspective, it has a smaller number of cores, but each one of those cores is much faster, resulting in a nice gain of performance in both compute apps and of course gaming.

As has become the custom with fresh launches, the HD 6990 once again lowers the overall power consumption, at least at load, from ~51W to ~37W. In producing the HD 6990, AMD has broken through the PCI Express recommended maximum power throughput of 300W and delivered a card that can be pushed to upwards of 450W. Whew… NVIDIA can sure rest in the fact of knowing it has no single GPU to draw power quite like this.

There aren’t enough pictures on this page, so we’re planning to make it up on the next, to help explain the number of new features unique to the Radeon HD 6990!