With its Radeon HD 6900 series, we saw AMD do something it doesn’t often do… release special features not found on previous models of the same series. For example, we saw the introduction of a dual-BIOS, something that the company further improved on the HD 6990.

For the most part, most of what we’ll be talking about on this page boils down to being an improvement, as AMD doesn’t seem keen on just releasing a dual-GPU model that people are going to surmise as being a “CrossFireX HD 6970 in a single card” offering.

The HD 6900 series introduced a simple, yet useful, feature – a dual-BIOS. Originally intended to cater to those die-hard overclockers that have the potential to kill cards, the dual-BIOS acts as a failsafe in case one BIOS decides to corrupt itself. If there’s ever a problem, the user can simply switch the BIOS switch over, and then the card will remain bootable again. Or for the more serious overclockers, you can flash one of the BIOSes to a pre-OCed state, and then switch between them at boot time. 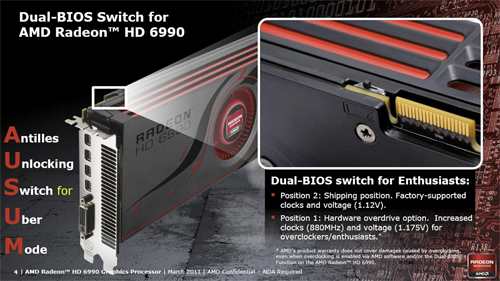 To help explain the improvements made to the dual-BIOS for the HD 6990 card, AMD has created the strangest acronym I’ve ever seen: A.U.S.U.M., phonetically pronounced “Awesome”, and decrypted to mean “Antilles Unlocking Switch for Uber Mode”. The less complicated way to explain this is that on the HD 6990, the second BIOS tacks on an additional 50MHz, to settle it at 880MHz (a la HD 6970). At the same time, the stock voltage is boosted from 1.12v to 1.175v, for improved overclocking ability.

If it wasn’t for the fact that moving this switch also increases the voltage, I’d be mega-confused as to its existence. After all, if the card is verified stable at 880MHz, why not ship it that way? It could be that for those clocks, the 1.175v isn’t only a luxury, but required, and as we’ll see in our power consumption tests, it also manages to add about 50W to the load wattage.

More than ever, AMD has seemingly become a bit more interested in seeing its cards get overclocked, because for the first time… ever (or at least, in a while), the company has given us some truly impressive clock limits right inside of its Overdrive overclocking tool. Typically, AMD may allow us a mere +50MHz to the core, but here, the limit has been made 1200MHz. That’s 370MHz above stock! 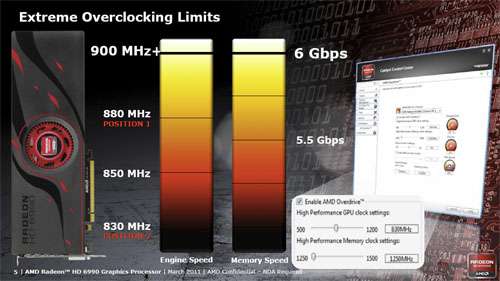 I don’t have a beef with third-party overclocking tools, but it’s much easier to perform overclocking from inside the driver that has to be installed anyway. Please, AMD… keep this up. I’d love to see more courteous limits on all Radeon cards, not just the high-end, and I know I’m not alone.

As covered on the previous page, the Radeon HD 6990 is one of the most power-hungry graphics cards we’ve ever seen, and because of that, AMD had a couple of hurdles to work around, especially while keeping everything on a single PCB (I hope we never have to go through that again). 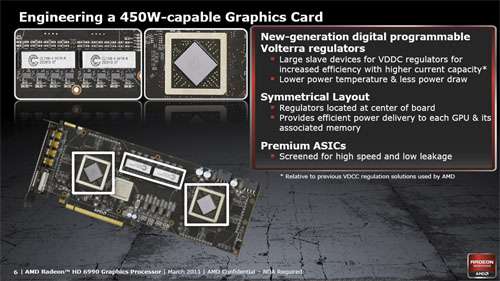 To help prevent poor power regulation from ever becoming a problem, AMD’s adopted the use of a couple of Volterra regulators that are designed to both improve efficiency and handle a much higher load, and can also lower temperatures and decrease power consumption. The board comes with two of these regulators, and both are located beside each other in the center of the board, which was done because AMD finds a symmetrical layout to be the most efficient. I’ll take its word for it, especially since there can be upwards of 450W flowing through this thing.

Here’s a look at the barebones PCB:

This photo was provided to us by AMD itself, as the company urged us to not remove the cooler in order to take our own shots. Why? It all has to do with the cooling solution, which AMD covers with the help of this slide: 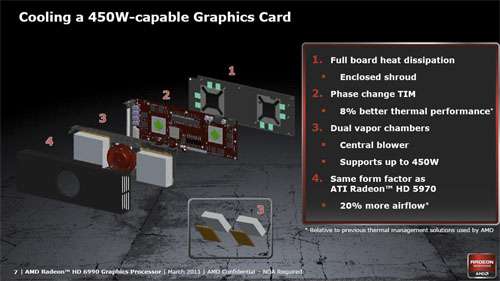 Instead of using ordinary off-the-shelf TIM (thermal paste), AMD opted instead to use “Phase-change TIM”, which it says can improve the thermal transfer by 8%. The problem, is that in order for phase TIM to prove effective, the cooler cannot be removed or adjusted after it’s applied. Therefore, if we were to crack open our card, we’d never be able to see the original cooling performance that the card offers.

In the same slide, you can see how the card is constructed. At the back is a backplate, for improved thermal transfer, and to improve the heat dissipation from the back memory chips. On the card itself is another plate that overlaps the PCB, and features a central fan. On top of each GPU is a finned heatsink, or “vapor chamber”.

Though this design at first looks rather ineffective compared to the HD 5970, it’s in fact much better, with a promised 20% increase in airflow. This is despite the fact that the card is closed off at the back, meaning all hot air will go out through the back. In using this card, it has never been more important to make sure there is no blockage at the back of your PC!

A rather significant change made to the HD 6990, when compared to the other HD 6000 series cards, is that AMD dropped the display connectivity options found at the back for a revised solution. Rather than have 2x DVI, 1x HDMI, and 2x miniDP, AMD has instead provided 4x miniDP and 1x DVI here. It sounds like a strange move to make, but believe it or not… this is another cooling-related feature. 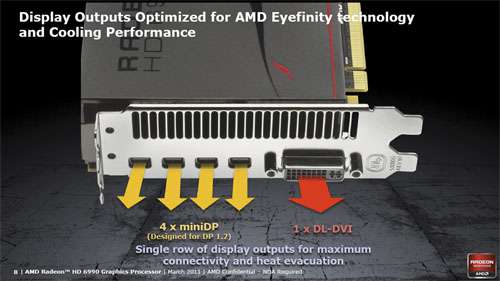 As seen in the above slide, the entire top portion of the silver PCI slot guard is open for airflow. On other HD 6000 series designs, only about half of this grate is available, as the top DVI port hogs the rest of the top. So what about using HDMI, or another connector with this card? AMD has that covered, as it’ll be a requirement for vendors to ship their HD 6990s with a couple of adapters:

Purchasing these adapters separately would run you about $60, so having them included with an already expensive graphics card is a nice treat (though to be fair… it’s kind of required). Thanks to these adapters, Eyefinity 3×1 setups will work right out of the box.

According to AMD, this card is perfect for a 7680×1600 (3 x 30″) setup, although I don’t think the included adapters would support it, as the 2560×1600 resolution would require a dual-link DVI adapter, not a single-link. The HD 6990 is of course able to support up to 6 monitors as well, in a variety of configurations.

Welp, that just about covers all of the new and improved features that the HD 6990 brings to the table, so without further ado, let’s peruse our testing methodologies and then get right into our benchmarking results!