AMD invited both media and vendors down to Los Angeles last week to learn about the company’s upcoming products and technologies, such as the Fusion-based Llano CPU (err, APU) and Radeon HD 6800 series. We were there, and have some preliminary information on both, as well as some light information about the event itself.

At an AMD press event held in Los Angeles last week, themed “Believe Your Eyes”, the company divulged a lot of information (think, five straight hours worth!) regarding all of its important upcoming products, including the Llano APU to the Radeon HD 6800 series, and also a renewed focus on both game developer relations and also the GPGPU aspect of computing.

When AMD and most other companies decide to gather up press and vendors and get them under the same roof, interesting locations are sometimes chosen. But for all intents and purposes, Los Angeles doesn’t strike me as being all too interesting, so what’s the deal? Well, the company opened up the event with its reasoning. Los Angeles is the heart of the movie industry, which is something that’s become one of AMD’s major focuses in recent years, from production to playback.

To help kick the show off, the company talked a bit about how its products are improving film-making, and it invited onto the stage Rodney Brunet from Troublemaker Studios to give his personal account of things. Troublemaker Studios is the brain-child of Robert Rodriguez, and has produced such films as Machete, Spy Kids, Planet Terror, Grindhouse and Sin City.

With AMD-based GPUs, Rodney says, producing mind-blowing scenes is made easier and better. One example he showed was a scene from Machete, where the lead character, played by Danny Trejo, does a spin around a room with a knife and decapitates three guys in the process. Blood spurts, heads fall to the ground, and overall, it’s good fun. 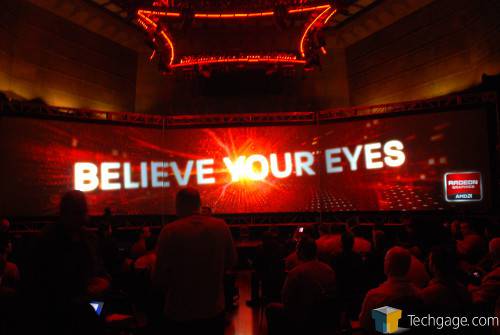 AMD’s focus on film-making and other things was a bit refreshing to see, and given the company’s momentum over the past couple of years, it doesn’t seem to be slowing down anytime soon. One of the initial slides shown had four bullet points that the company wanted us to walk away with, which can be seen below. 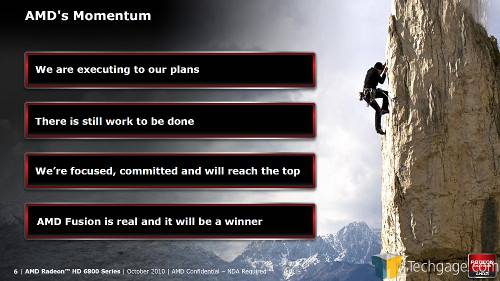 The most interesting point here is, “AMD Fusion is real and it will be a winner”. You’ve got to admire confidence like that, and based on what we know about it so far, there is a good chance that it will indeed be a winner. AMD isn’t producing the fastest CPUs today, but it does produce top-grade graphics cards, especially compared to Intel. Combine both of its major product-lines together, and we might just see something impressive.

To give us a taste of what’s to come, the company showed off a prototype motherboard with an unnamed Llano Fusion-based APU. We weren’t given clock speeds, or any other information, except that it’s likely to become one of the first Fusion APUs launched next year.

For the demo, the company ran a loop of an Alien vs. Predator scene (from the 2010 game), and overall, it ran about as smooth as it could be. The resolution was a modest 1024×768, but this is a fairly high-end game. Thanks to the Dell monitor used, which must have some sort of hardware scaling, it was hard to actually tell that the game was being run in a low resolution. 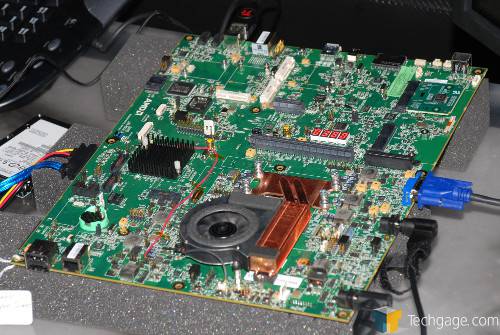 (You can view an even larger version of the above photo here.)

What’s impressive is how the APU was being cooled… with a simple copper heatsink. Here, the APU is directly underneath where the heatpipes end, and despite being a quad-core offering, it ran fairly cool… or at least that’s what we can say thanks to Kyle Bennett from [H]ard|OCP. Prior to him entering the room, AMD asked us to not touch any of the sample, but Kyle was of course unaware. One of the first things he did was touch it, and while it made for some hearty laughs, it also told us that the APU was running cool. Kyle still has his fingers to prove it.

You might have noticed that I’m calling this processor an APU and not CPU, and there’s a good reason for it. Because this processor doesn’t only include a central processing unit, but also a graphics processor, AMD has coined the term APU (accelerated processing unit). It might seem kind of needless to change the name from CPU, but the company does make a good point. If you mixed some juice crystals into a jug of water, you wouldn’t keep calling the liquid water, and the same kind of thing applies here.

There’s not too many specifics we know about Llano up to this point, but as the prospective launch date is early next year, it shouldn’t take too much longer before all the details are spilled.

Of greater interest to most of us gamers in the room was the announcement of AMD’s Radeon HD 6800 series, and once again, I need to point out the naming here. As mentioned a couple of months ago, the ATI branding is on its way out, so going forward, it’s appropriate only to talk about Radeons as being AMD cards, not ATI. 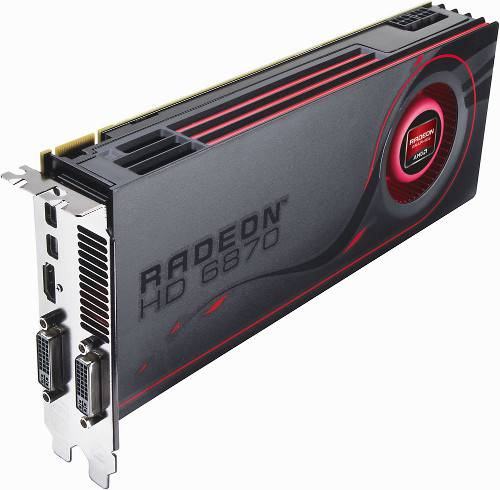 The first cards will be seen this coming Friday, and are part of the “Northern Islands” family. With it, AMD wants to increase its lead in graphics (whether it has the lead now is a matter of opinion), and also to give people a preview of what to expect with its Fusion APUs. In what way? Probably with the help of improved power efficiency and things like that. Performance-wise, it’s hard to truly predict what Fusion will bring to the table.

Even with this Radeon launch, there’s not much we can say before Friday except that the first cards will be the Radeon HD 6850 and HD 6870. Specs, pricing, and all related information has to wait. For what reason, I’m not sure, but that’s the way she goes.

Both cards are for the most part identical in both size and aesthetics, with the main difference being that the HD 6850 has a single power port on its end, rather than two on the top corner. 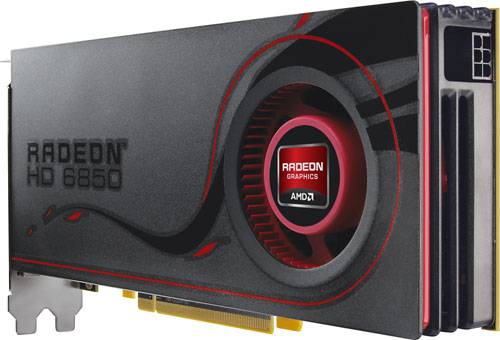 Even without specs, there are a couple of things to expect. The HD 6800 series of cards are still built on 40nm, and AMD has focused a lot on refinements and efficiency improvements. So despite the 40nm build, you can expect better performance per mm² and other natural additions, such as updated display technologies, more multimedia support, et cetera. Perhaps we’ll even see improved tessellation performance.

To help show some of the HD 6800’s improvements off, AMD talked a bit about its Mecha Rampage demo, which uses DirectCompute for rigid body particles, procedurally generated debris and heavy use of tessellation – especially with water. The game engine to power this is Vision 8, from Trinigy, and one thing AMD touted is that this entire demo was completed in only a couple of weeks from beginning to end, which given the level of detail, is impressive.

We didn’t manage to record a video of the Mecha Rampage demo from the event, but our friends at Legit Reviews have, so I recommend checking their site out if you are interested in seeing it.

This is all we can really talk about now, and boy, was it difficult to not let some things out of the bag! Stay tuned to the site later this week as we’ll have a look at AMD’s latest Radeon offerings.