One of the big hurdles for Eyefinity adopters-to-be has been the expensive “active” DisplayPort adapters required for some setups. Last week, though, AMD let us know that it’s been working with companies to help deliver $30 DisplayPort to DVI cables to the market. At the same time, the company also updated us on other Eyefinity happenings.

When AMD launched its Eyefinity technology last fall, it introduced a much more affordable way for gamers to achieve the goal of playing their favorite games across multiple displays. Prior to this, the most common solution was to use Matrox’s TripleHead2Go, and although it was quite a good product, the $300+ price tag did well to keep people away.

What Eyefinity did was essentially rid out that extra cost entirely, because AMD built the technology into each one of its Radeon HD 5000 graphics cards. That meant that anyone who purchased one of the company’s latest offerings would have immediate access not only to superb multi-display support, but also support for gaming across those same displays. Believe it or not, there’s a very big difference between the two.

Even at the time of Eyefinity’s launch, though, many people still believed that it was too expensive to get hooked up with a multi-display setup, but I’m not so sure that can really be said today. After all, for the price of a good display a couple of years ago, you can purchase a 3 x 24″ configuration today (~$600). Add AMD’s high-end Radeon HD 5870 and you have the start to a kick-ass gaming setup for $1,000.

Oh, but wait. Let’s not forget about the fact that DisplayPort has to be involved somewhere in the setup, and if you don’t have such a display, an “active” cable could run you upwards of $80. When I first heard that quoted price last year, I couldn’t believe it. I hate feeling like I am being ripped off after purchasing a product, and well… it’s hard to justify an $80 cable.

On a press call last week, AMD said that it has teamed up with a variety of partners in order to deliver the same kind of cable but for a far more affordable price… just $30. I’ll be honest in saying that $30 still seems a bit high in comparison to what a standard DVI cable would run you, but I can also say that $30 is a major improvement over $80, or anywhere around there. 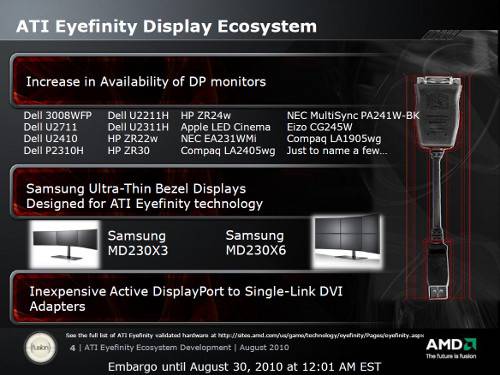 As a whole, this entire announcement isn’t that amazing, but it does mean that you’ll be able to equip yourself with a triple-display setup even easier, and for less money. At first, the cables will be available in MiniDP to DVI and DP to DVI formats, and it’s likely that some companies will choose to bundle them with special editions of their graphics cards. As these cables carry a suggested price of $30, you could likely expect these special bundles to include a similar premium. Some companies you can expect to sell these adapters include Sapphire, XFX, PowerColor, Accell, and Wieson.

To help picture some of the configuration options a little bit better, here’s a chart that AMD uses to help give people some ideas as to the possibilities:

Almost all of the current Radeon HD 5000 series cards on the market, with the main exception being the lowest-end models, feature 2x DVI, 1x HDMI and 1x DisplayPort. Since AMD wants DP to be a part of the equation (the company says that DP is the best connector for this use, and thus has constructed its architecture around it), you can see that it’s utilized in some form or another in each configuration.

If you happen to have at least one display that includes DisplayPort, then you’re good to go already, since you can use all three connectors (DVI-DVI-DP) natively, as the chart shows. It’s only when you aren’t equipped with a DisplayPort display that such an adapter is required. Although DP is growing in popularity at quite a rapid pace, it’s of no help to those with older displays, or even brand-new lower-end displays that don’t happen to feature DP (most sub-$200 24″ displays for example do not include DisplayPort). 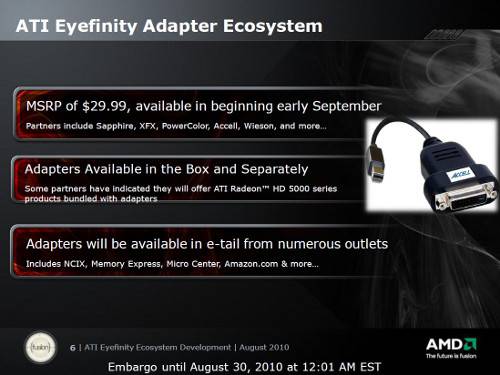 One important factoid to keep in mind is that the cable AMD has announced here will support resolutions of up to 1920×1200, so for those who might be considering 3x 2560×1600, a more robust cable will be required (DP to DVI-D), but at that point, the more expensive cable might not be a major issue given that three 30″ displays aren’t exactly cheap.

In addition to the announcement of the DP to DVI cable, AMD rattled off a bunch of information regarding the success of its current graphics card line-up. The focal point is the fact that in a mere three quarters, the company managed to ship over 16 million cards capable of supporting Eyefinity, and overall, the company holds 51.1% of the discrete GPU market.

That’s quite a stark contrast to just a few years ago, isn’t it? It’s not too often we can see such a turn-around, but for the sake of the obvious need for good competition, it’s great to see.

While the cards themselves are selling well, support for Eyefinity also continues to grow, with many current titles supporting the technology just fine, even if it isn’t official. Mafia II, for example, works quite well across three displays (I haven’t tested six yet), and that’s a title not even acknowledged on the company’s official game support page. 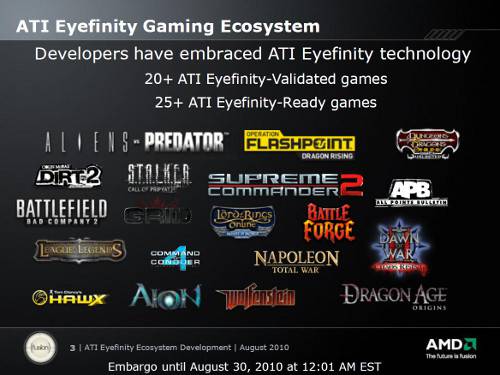 In addition to game support, AMD also stressed that hardware support is continually growing as well, with the number of DisplayPort-enabled displays being released all of the time, from companies such as HP, Dell, NEC, Compaq and Apple. For Eyefinity-specific displays, AMD also made sure to reiterate that Samsung has a couple of sweet thin-bezeled displays available for purchase, including the MD230X3, designed for triple-display, and MD230X6 for six.

If there’s one thing that AMD wanted to sink in our heads, it’s that its graphics card line-up is doing extremely well, and with this new cable, Eyefinity is more affordable than ever.

As a side note, it’s been just over three months since we took a look at Eyefinity gaming performance on 3 and 6 displays, and soon, I’d like to revisit it all and see where things now stand. There have been some major Eyefinity enhancements made in the driver and various game profiles since then, and also new games released for us to check out. I hope to have a follow-up sometime in September, so keep an eye out for it!