With Intel’s Sandy Bridge launch, and the realization that AMD’s Llano was right around the corner, I don’t think many people expected to see three sub-$100 cards at this point, and to be honest, neither did I. Fortunately though, for those who do need such options, they’re there.

But what exactly does a card like the HD 6450, for example, offer over Intel’s Sandy Bridge? This is a tough one to answer, but mostly it boils down to the fact that most games can be run with a certain degree of reliability better than Intel’s IGPs, and also the fact that AMD’s GPUs tend to render video a bit better than other solutions (I haven’t verified this myself).

Aside from that, a purchase would also make sense if you didn’t already have an IGP solution at hand, but needed a simple graphics card for whatever reason. For those running HTPC’s or really low-end gaming rigs, the other cards, HD 6570 and HD 6670, can make for a good choice depending on what you’re looking for. 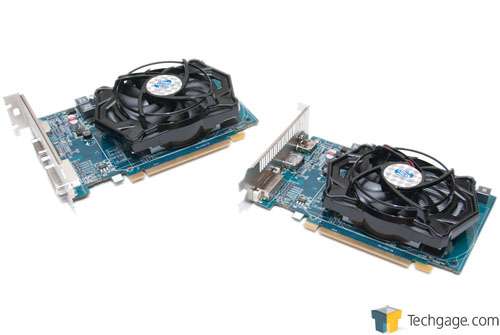 Both the HD 6570 and HD 6670 are hard for me to sum up, because quite honestly, I don’t feel like either of them need to exist. I don’t have AMD’s sales statistics, and haven’t done surveys, but I’d like to think that if someone cared about gaming at all, they’d at least have a card that could handle 1680×1050 just fine with good detail levels across most games. On cards like these benchmarked here, you really have to do some heavy tweaking, and that sucks the fun right out of things.

While the HD 6670 sells for $99, for $50 more you can get the HD 6790 which is quite literally twice as fast – or in the case of the $80 HD 6570, is twice as fast. I have a hard time recommending sub-$100 cards for that reason, because while some may prefer to spend as little as possible, you’ll really be doing yourself a disservice by doing so.

If you refuse to spend more than $100, or want a cheap card for Eyefinity, any of these cards are going to deliver a decent enough gaming experience. Just be prepared to plummet your detail settings in today’s games, or the resolution.

NVIDIA doesn’t have any current-gen cards prepared to compete with AMD’s newly-launched offerings, although it did ping us to let us know that its GeForce GTX 450, which is about 15% faster than the HD 6670, can be found for $85 after mail-in rebates at Newegg, or $115 without. If you’re patient for a mail-in rebate, NVIDIA’s side offers a faster product, but MIRs are still nothing more than a pain for its customers.