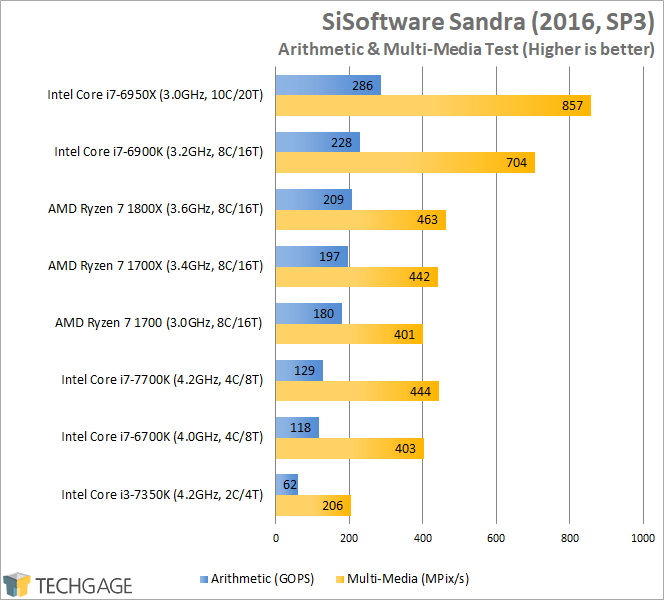 Intel is a tough nut to crack where multi-media is concerned, so it was obvious that all three Ryzen chips would have a good challenge on their hands. But, continuing the theme we’ve seen up to this point, Ryzen’s extra cores can negate its IPC or architectural shortcomings.

In the multi-media test, the 1700X matches the 7700K, while the 7700K proves about 10% better than the 1700. Moving into the arithmetic side of things, though, Ryzen’s 16 threads spring to action to deliver excellent performance against Intel’s i7-6900K. 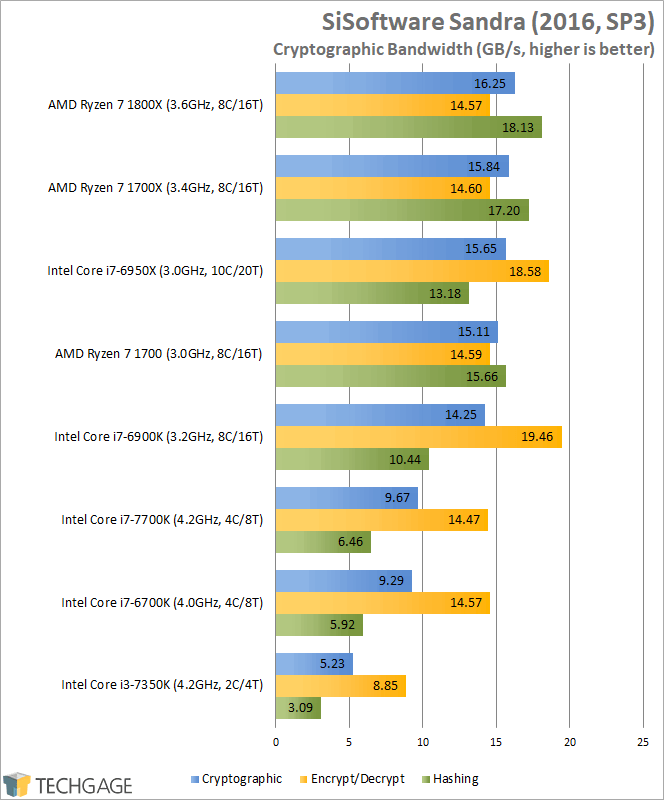 Not during phone or in-person briefings did I realize Ryzen was designed to be such a cryptographic powerhouse, but just take a look at these results. The 1800X bests Intel’s 10-core 6950X at both overall bandwidth and hashing, while the Intel chip stands ahead in the encryption / decryption test.

In another matchup, the 6900K bests the 1700 in the same encrypt / decrypt test, but the lead once again changes with the hashing and overall bandwidth tests. 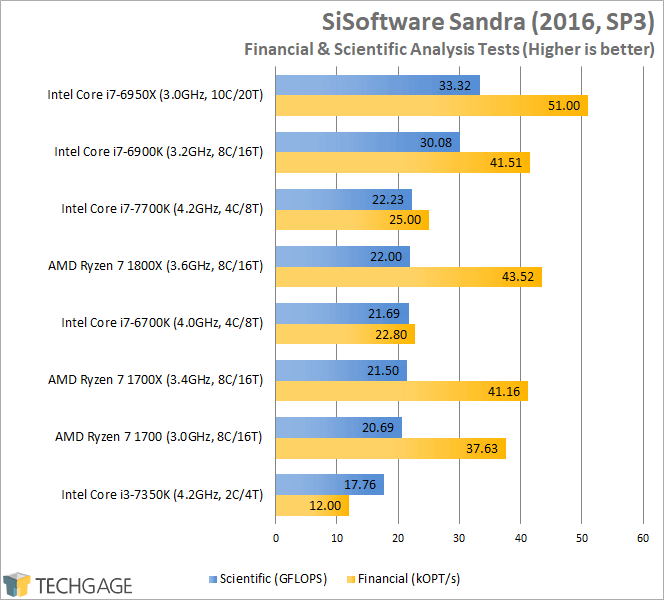 In the scientific test, Ryzen scaled pretty nicely against its Intel competition, with Intel getting the overall nod. With the financial test, we once again see Ryzen strutting its stuff, with the 1800X beating out the 6900K. Even the Ryzen 7 1700 beats out every single Intel chip here outside of the 8- and 10-core. 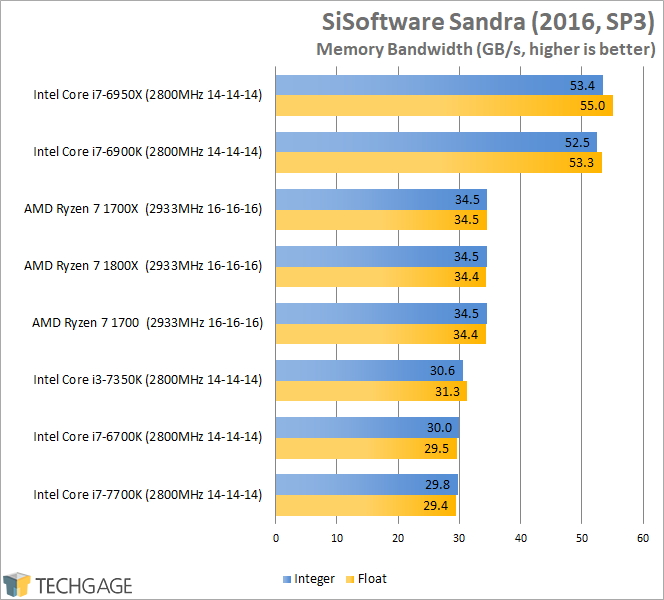 First-gen Zen parts come equipped with a dual-channel memory controller, so memory bandwidth is comparable overall to Intel’s current Z270 platform. Based on the results here, it seems AMD’s memory controller is quite effective, as while the DRAM has been clocked ~5% higher on our Ryzen testbed, the bandwidth improvement is closer to being 10~12% higher.

Improved bandwidth is much-appreciated, but unfortunately on Ryzen, it comes at the expense of latencies: 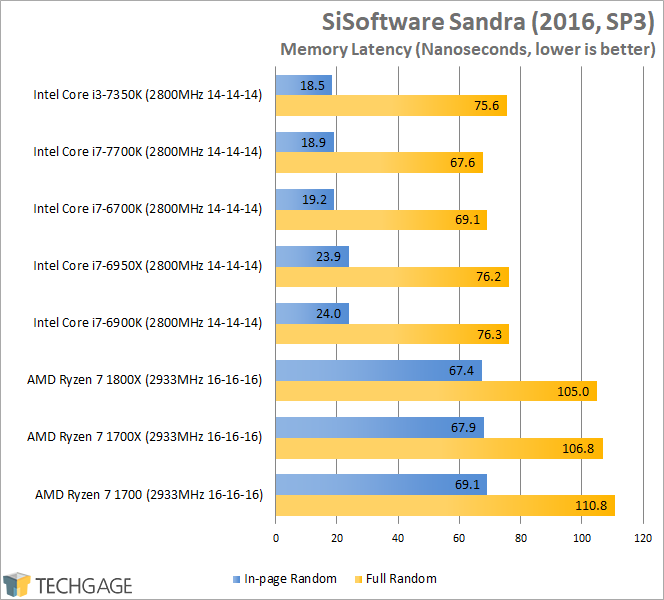 While the results here are stark, the real-world impact doesn’t appear to be significant, as seen throughout the numerous tests on these pages. It does make me wonder what kind of results we’d see if AMD’s latencies managed to be on par with Intel’s, though.

Inside the chip, the latencies don’t fare much better, with there again being stark increases over Intel. These higher latencies owe most of their thanks to our operating systems being unable to take proper advantage of the architecture, which means that OS updates in the future could dramatically reduce the latencies we’re now seeing. 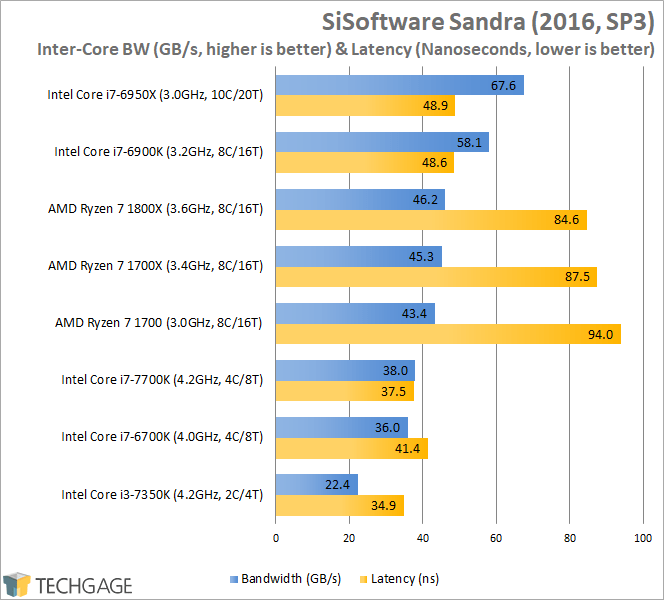 If an application uses a couple of threads from each CCX module, which is likely to happen often with moderately multi-threaded applications, latency is going to be introduced. If an application is able to restrict threads to the same CCX module, then latencies can drop significantly. How much does that matter? Well, it means that it can affect application performance, although the real-world performance we’re seeing doesn’t present this as a major issue. 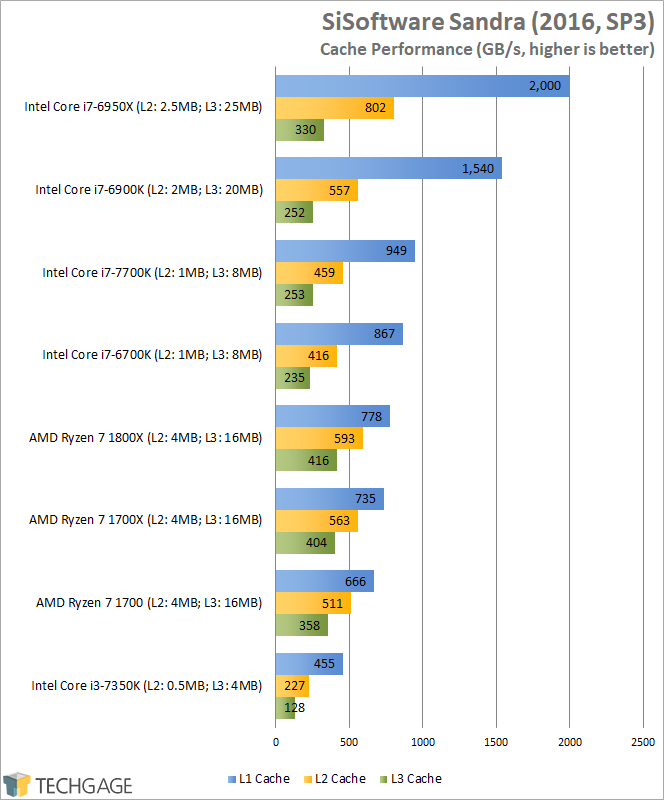 With a look at the cache, we see AMD performing very well on the L2 and L3 fronts. Cache performance is hard to gauge the true value of, though, because the performance here doesn’t scale the same overall as it does with the real-world tests. Ultimately, this graph is more for interest’s sake than it is for interpreting real-world performance.