After months of anticipation, Ubuntu 11.04, codenamed ‘Natty Narwhal’, has launched in its final form. The big news this time around is that the OS ships with Canonical’s ‘Unity’ desktop environment as default – a large risk on behalf of the company. To see if that risk paid off, let’s take an in-depth look to see what Unity’s made of.

Before wrapping up, I’ll admit that this article isn’t quite as long as I planned it to be. I’ve postponed two pages that were to be included so that I can refine them and make sure that I’m covering everything I want to. I’ll be publishing a follow-up article next week where I discuss both my likes and dislikes of Unity, so as to dive in a little bit deeper with the latest environment. Be sure to check it out.

Another thing I’ll have to admit is… Unity impressed me a lot more than I expected it to. As I mentioned in the intro, it’s far from perfect, but prior to installing it on my PC, I had a gut feeling I’d be going back to my native KDE-based install quick. That wasn’t the case, and most often, I didn’t even think about the environment I was using… I was just getting work done.

The biggest concern I had with Unity before testing it out was the sheer focus it has on optimizing the real-estate of your monitor. When you have an application running maximized, it truly is filling up almost all of the screen. The reason this concerned me is that I simply don’t use any maximized applications – well, Thunderbird being an exception. For the most part though, I have multiple windows side-by-side at all times, and with few applications having their menu glued to their own window, it just seemed clunky.

I was right to a certain extent. Take a look at the following screenshot, for example: 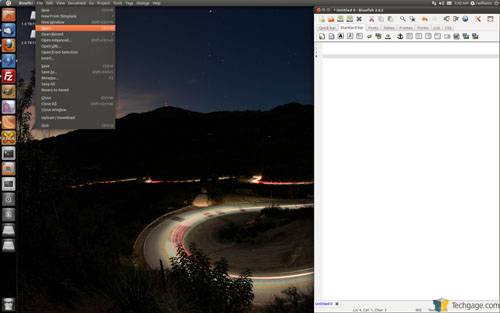 Because of how I handle my workflow, I always keep my HTML editor to the right side of the screen; in this case Bluefish. Because the program itself has no top-menu, in order to do something like open a document, I need to move my mouse all the way over to the left of the screen, and use the menu there. I am not sure if this kind of thing was an oversight or not, but unless you run your application either maximized, or pinned to the left of the screen, the menu up top isn’t going to be that convenient.

I’d also have to comment on the pop-up boxes to install software, which to me, are not that convenient. Hitting Alt + F2 to bring up a run line is fine, because it still acts as a run line, but to simply navigate your installed applications, you have to open the applications pop-up, then click a drop-down menu to the right to choose a specific category. Unity’s goal is to create an efficient workflow, but unless you have all of the applications you ever use on the launcher, opening an application is just not that simple. For ease-of-access, I don’t think anything could compare to the simple menu that GNOME 2.x has, or KDE’s “classic” menu for that matter.

After some use, that all becomes easier to get used to, but I don’t think it’ll ever feel like it’s the “best” way to do things. The simple fact is that it’ll require more steps than what we’re used to, to launch an app – unless you want to Alt + F2 and type in the exact name of the executable. 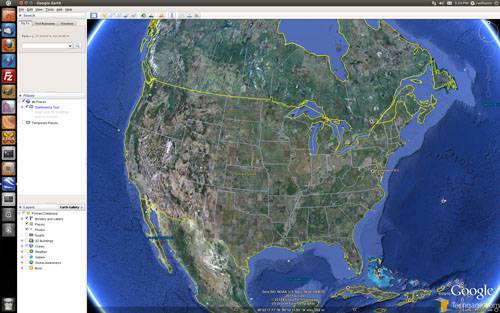 I’m going to save most of my complaints for the follow-up I’m posting next week, but there’s another quick bug I must talk about here. Because Unity doesn’t act 1:1 like GNOME 2.x did, some applications will fare better with the taskbar than others. In the case of both Pidgin and Xchat, clicking their respective “X” to minimize them to the tray, doesn’t. Instead, both will simply disappear from the menu, and appear as if they’re not open.

The fix is to open up a terminal and type in something akin to ‘killall xchat’, but for obvious reasons, that’s not ideal, and nor should it ever be required. The fact that this occurs with two popular applications tells me that the problem just wasn’t ironed out in time for launch, but chances are it will be in the near-future – at least, I hope so.

Unity aside, Ubuntu as a whole is better than ever, in my opinion. There are little things I noticed this time around that impressed me quite a bit. For example, when I tried to extract a .RAR file, Ubuntu told me that I didn’t have the proper package, ‘rar’, installed. So, it allowed me to do that automatically, and once it was installed, the OS went ahead and extracted the archive in question. Seems simple, but features like that are nice. 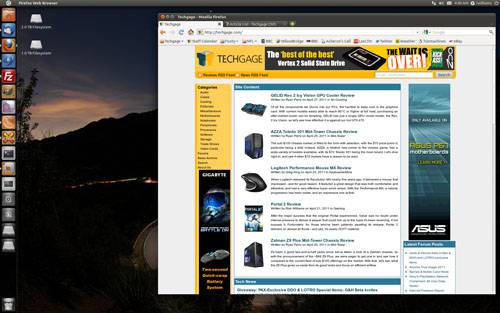 As always, Ubuntu also did a great job detecting every last bit of my hardware, including my Intel server NIC, two different ASUS Xonar audio cards, the AMD Radeon HD 5970 and also USB 3.0. All told, I didn’t have to install a single driver once up and running, though I did upgrade to the AMD Catalyst 11.4 driver once it was released, since up-to-date GPU drivers are rarely a bad thing.

Whew, with so much having been said, let’s get to wrapping this up, shall we?

As I mentioned, Unity impressed me quite a bit, and I certainly don’t dislike it as I expected to. It has some issues, some of which have to do with bugs, and the others which have to do with design. But it’s not an environment that bugged me to such a great extent that I felt like cheating and going back to my beloved KDE. For a desktop environment that does things quite a bit different than the others, I find that impressive.

Aside from bugs getting ironed out, I think Canonical should start including the Compiz config manager in the updater, or at least bundle it with 11.10 and beyond. The fact that it’s not included here just blows me away, because as mentioned, it’s the only way to tweak the taskbar. If I didn’t stumble on that tool and endured the things I didn’t like about that taskbar, I feel like I would have liked Unity a lot less. Simple things can make a huge difference.

Because of some bugs that still exist, I’m not sure I could outright recommend 11.4 to most people at this point in time. If you’re someone who can handle the odd bug and know how to work around them, you’ll be fine. For the novice, I’m not so sure. It’s unfortunate, too, since most of the bugs seem rather simple to fix. I’d expect that by the time 11.10 rolls around, Unity could well be considered a “great” desktop environment.