As with all of Antec’s more recent enthusiast-market cases, the NSK2400 features a tasteful exterior design, with emphasis on functionality. The real story with the NSK2400 isn’t what’s outside, however, but with what’s inside. The Antec NSK2400 incorporates several of the fundamental design principles of the P180, including multi-chamber design, and multiple large, slow-spinning fans. 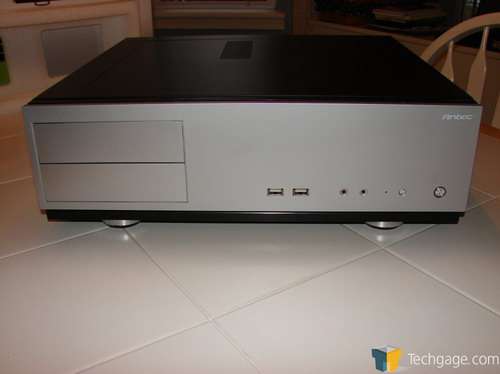 The front of the NSK2400 is relatively minimalist in comparison to the Fusion, which shares the same interior design as the NSK2400. While the fusion sports a volume knob and 2-line VFD, as well as a stealth optical drive cover, the NSK2400 is more Spartan, with only a pair of bezel covers over the 5.25″ bays, and a set of front-mounted USB and audio ports. The Fusion also adds a front-mounted Firewire port. Neither case based on this internal design contains provisions for an external 3.5″ drive. 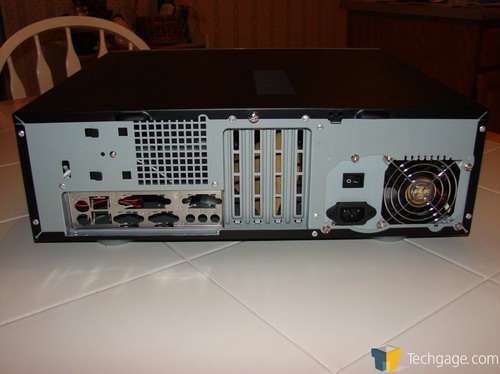 The rear of the NSK2400 offers numerous paths of air ingress for the main chamber, which are designed as â€œcold air intake” for the CPU cooler and expansion cards; more on that later. The PSU is also mounted at the rear of this case, which limits the case to a MicroATX motherboard form factor. Everything else is pretty much standard fare. This case is constructed of 0.8mm-thick steel, which imparts a very solid structure. 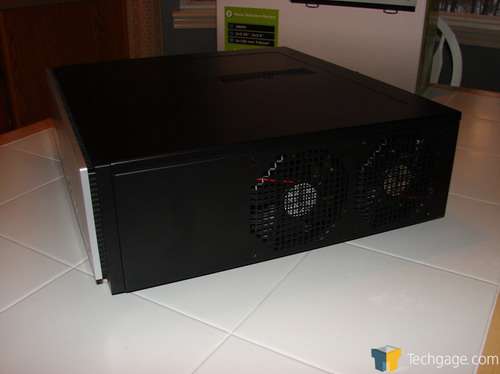 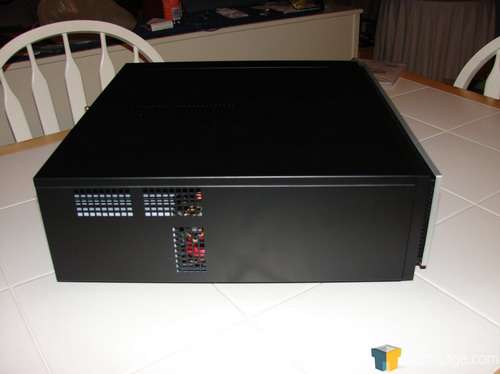 The most distinctive feature of this case is its unorthodox cooling scheme. Instead of trying to cram 60mm fans (which aren’t very good for noise reduction) on the back of the case among the I/O ports and expansion slots, Antec uses the uncluttered side panel as the mounting location for two large 120mm TriCool fans. These fans have a three-speed selector switch that allows them to operate at high speed or low speed based on the preference of the system builder.

Since these fans exhaust from the side, and are the only exhaust from the case’s main chamber, care should be exercised when fitting an NSK2400 case into a cramped equipment rack to ensure that these fans can breathe. The vents on the other side of the case provide ambient air intake for the power supply so that its thermally-controlled fan can operate as slowly as possible, minimizing noise. 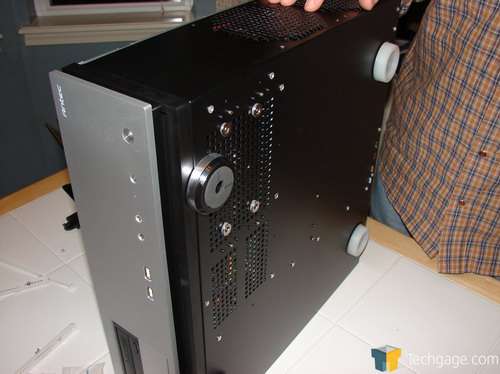 The twin 120mm case fans draw the majority of their air from a large vent area on the bottom of the case, though several strategically-placed air intakes on the rear of the case provide cold air intake to specific heat-producing components. It’s a clever way of creating lots of open, un-restrictive ventilation area. The top panel of the case, which fastens with a single thumb-screw, also features a cold-air intake for the video card. 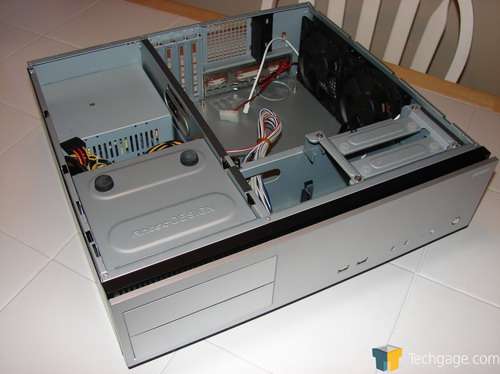 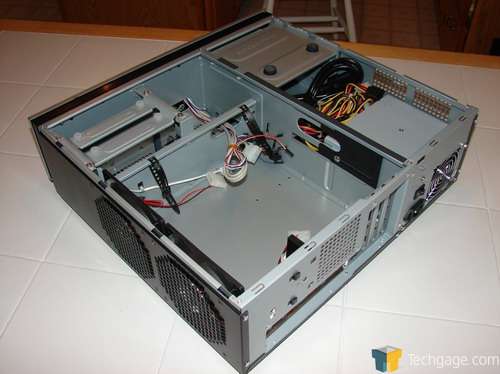 Taking a look inside the NSK2400, the first thing that we notice is that the internal space is divided up into three sections. The power supply and optical drives get their own separate compartment in order to feed the power supply with a steady stream of colder ambient air instead of air that has been warmed by preheating in the case. Air for the main chamber is drawn in through vents at the bottom of the front of the case, and the air first passes over the hard drives before entering the motherboard chamber. 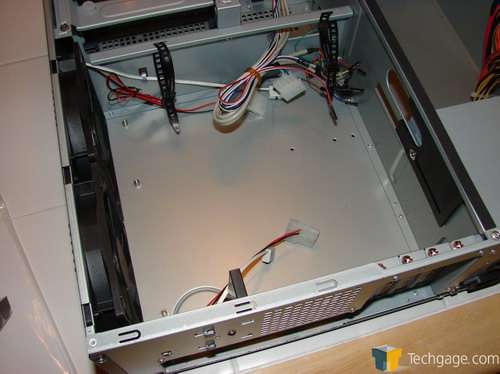 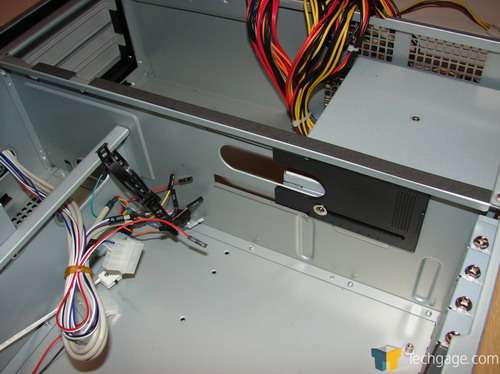 Another feature of this case is a built-in cable management system that makes it easy to keep all the wiring neatly tied out of the way. Two re-closeable cable ties are provided along the wall between the hard drives and the motherboard, and a sliding door is provided between the power supply compartment and the motherboard compartment, which keeps the air spaces isolated. 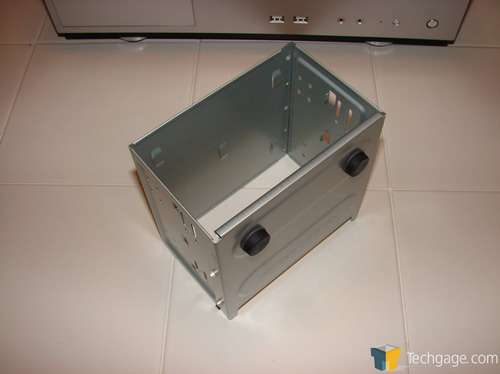 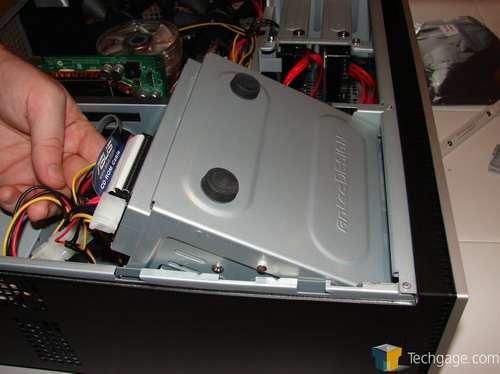 Installation of the 5.25″ drives is simplified by a removable cage that simply lifts out. A pair of rubber feet keep the drive cage firmly in place when the top of the case is installed. To lift out the cage, simply lift up at an angle. 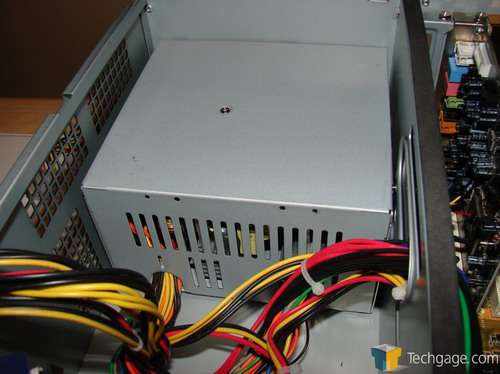 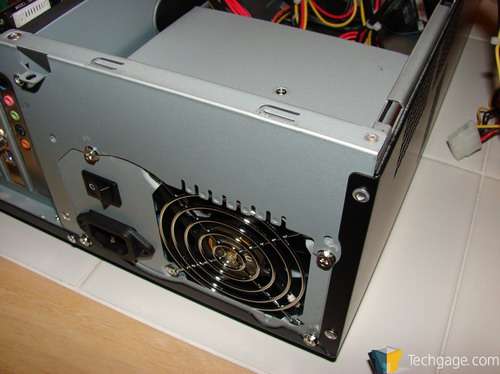 The included power supply with this case is an Antec SU380 power supply, which is another product of Antec’s working relationship with Seasonic, who is the OEM for Antec’s NeoHE and TruePower Trio power supplies. This particular power supply bears strong external resemblance to the Seasonic Super Silencer series of several years back. While this unit isn’t perfectly silent, it’s certainly very quiet, and only barely noticeable. This PSU provides plenty of connectors, including two SATA connectors and a 6-pin PCI-Express power connector for power-hungry video cards.

Next, let’s take a look at a typical system installation in the NSK2400.