Because this precise hardware configuration has already been tested in two cases, we have comparison data for both. 3DMark 2006 was used to stress the CPU, northbridge, and GPU, and the same test with default settings was run in all configurations tested. For each temperature measurement, the motherboard’s onboard data acquisition system and internal thermistors were used.

A quick check of the Task Manager confirmed that 3DMark 2006 stressed both cores of the processor in our test. Recorded temperatures represent the maximum observed temperatures of the respective components during the stress testing. Through all testing, Cool n’ Quiet features of the motherboard were enabled, as they will likely be in actual use. The speed of the video card’s fan was automatically increased when it entered 3D mode; this logic could not be disabled, but the video card fan was momentarily stopped by hand to listen to the noise produced by other case components. 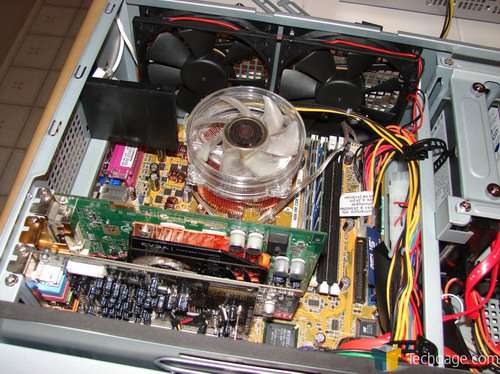 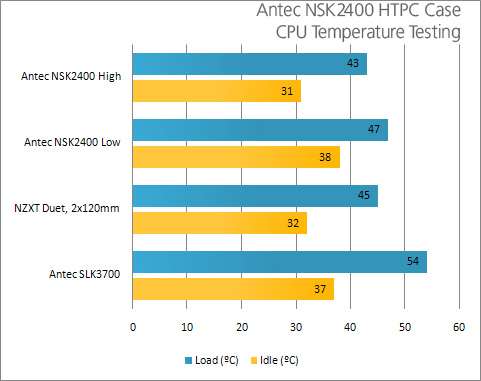 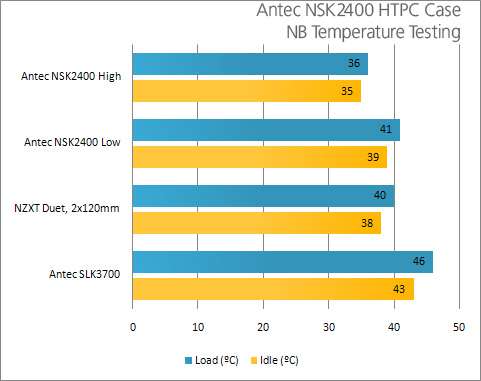 As you can see, none of these are temperatures that I’d consider ‘high’, but the NSK2400 is easily the best performer of the three. The GPU thermal results in the NSK2400 were better than what we observed in either the NZXT Duet or the older Antec SLK3700, perhaps owing to the cold-air intake directly above the video card. With the Tri-Cool case fans set to low speed, the NZXT Duet managed better CPU temperatures by about 2 deg. C, but this was likely due to the fact that the exhaust fan in our testing of the NZXT Duet was thermally-controlled.

In the future, I won’t use thermally-controlled case fans in any of my tests, since they make it tough to compare â€“ I consider that lesson learned. Even that couldn’t save the Duet from poor airflow around its video card, though. At low speed, the lesser difference between idle and load temperatures means that hot air isn’t building up around the CPU fan. 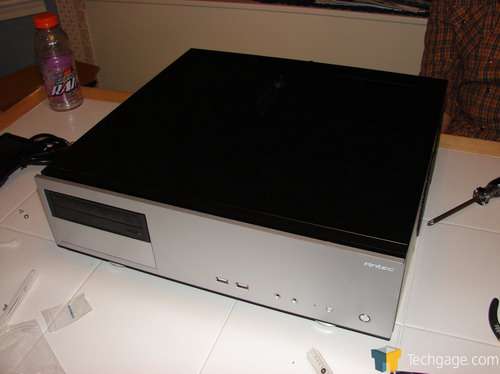 Even though Vista running in 3D mode constantly caused the EVGA’s video card fan to always run at its maximum speed, stopping the fan for a moment revealed a virtually undetectable noise signature. With a more carefully-selected quiet or fanless video card, the NSK2400 can serve as a physical platform for a silent-running media center PC. The PSU’s built-in fan produces more noise than the dual-120mm fans on low speed, but not by much â€“ and it was only detectable with my ear down there, listening closely. If low noise is your goal, this case is a safe bet.