With such a large choice of PC cases available for purchase, finding one that perfectly suits your tastes can be difficult. Antec is one company that doesn’t mind taking a chance with products, and the Skeleton is the result of that. This open-air chassis is one of the most unique on the market, so we’ve put it to the test to see if it’s worth the $150 price tag.

Assembly is a bit strange at first, because of the unorthodox case design. Affixing the motherboard is pretty straightforward, using the provided motherboard standoffs. You’ll see that the motherboard tray has a few holes in it, giving you lots of options on how to thread cables through. Once you’ve put the motherboard on, you’ll feel like there’s something missing. 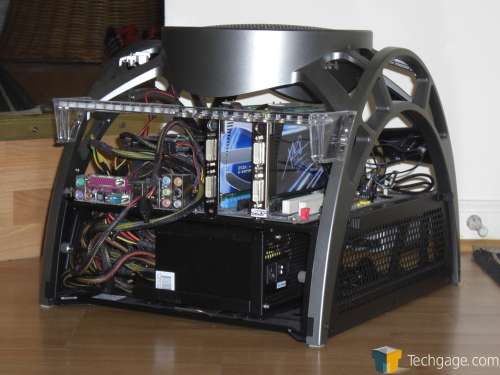 That empty space you feel, when you know you’ve forgotten something, but can’t remember what? That’s it. You’ll push it aside, and tell yourself you haven’t forgotten any, and go on to assemble the rest of your system. Then, when you go to plug everything in for a first-run, it’ll hit you. There’s no IO panel. It won’t affect functionality, but if you don’t know exactly where things are on the back of your motherboard, or they aren’t labeled or obvious, it’s going to be a hit-and-miss kind of game to try and find what each plug does.

The power supply, as already mentioned, is installed by sliding out a tray on the second tier. You’ll be installing it sideways, which is a bit strange, but understandable. However, there must be a better way to place the power supply, rather than sideways. Placing it at such a rotation makes plugging the system in difficult and awkward. 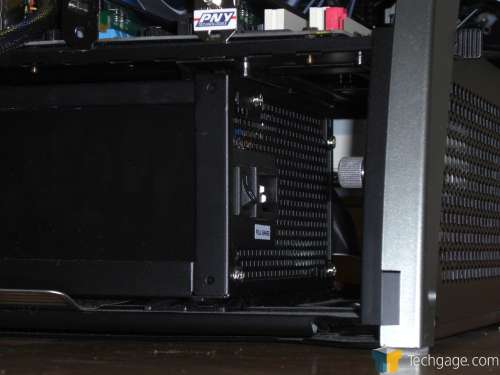 Installing the optical drives is generally similar to any system, but note that you’ll need to remove the side panel to be able to screw them in. If you decide not to screw them in, the thumbtabs will keep the drives in place just fine, and the same holds true for the hard drives on the other side. Standard case screws aren’t quite long enough to secure the drives through the rails, so Antec has provided some longer ones. In my package, however, I was one screw short of what I needed. It wasn’t an issue, but since the standard length PC screws don’t work, it could be considered a problem in somebody else’s system.

I was disappointed that the Skeleton only had two 5.25″ bays, since there are some cool accessories I’d really like to put in. This isn’t unique to the Skeleton, the Nine Hundred and Twelve Hundred both only have three 5.25″ bays, but many people really like to have space for multifunction panels, fan controllers, and the like. 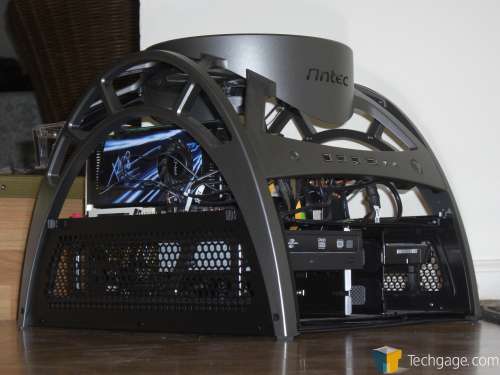 Also notably lacking are the 3.5″ bays. There are two on the front, but many people have 3 or more hard drives, or other 3.5″ form factor devices. It’s possible to “hang” hard drives from the side of the case, using the adapters provided, but it’s hardly as safe as mounting the hard drives inside the case. Connecting the cables is a breeze since the side panels are removable. Since the parts are closer together, some cables may be slightly longer than what would be optimal, and in a case like this, it’s very difficult to hide the cables.

While using the chassis, there were a few things that worried me. The open styling of the case, while fantastic for airflow, is absolutely terrible for protection. Considering that protecting the components is one of the most important jobs of a chassis, the Antec Skeleton scores very poorly indeed. Imagine dropping a cup of coffee, or spilling some water onto the enclosure? A small fortune’s worth of computer components could easily be ruined.

Heck, even more common on a desktop, a paperclip could jeopardize the entire system. The gazebo-like Antec Skeleton is also a prime victim to dust. Even when the system isn’t running, dust is likely to settle on components as it would on any other bit of furniture you own. Electrostatic discharge is another huge hazard, especially if you leave the system on your floor and out of the way, as I do, and you have a tendency to kick your feet while gaming. I would have really liked to see some plexiglass or plastic windows, even removable ones. The general rule of owning this chassis is that you need to play it safe. 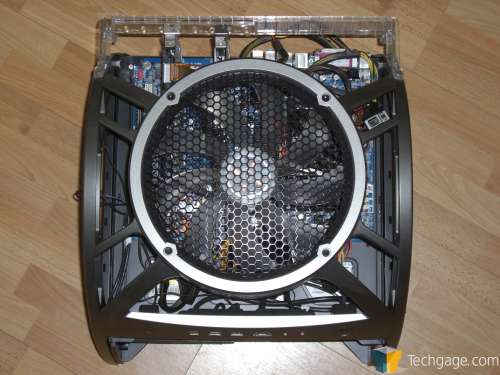 The top of the Skeleton isn’t flat, not even in the slightest. If you like to put things on top of your system, due to a lack of space, the Antec Skeleton is not for you. The closest thing to flat on the top of the chassis is the fan grille, which needs to be left uncovered to allow the fan to work efficiently.

Next, the 5.25″ and 3.5″ bays are fairly limited, and the alternative 3.5″ bays are hung on to the side of the case. This just seems like a really bad idea to me, especially if the case needs to be moved, or isn’t on the floor. I also didn’t appreciate not having an IO panel. It’s also a bit difficult to hide cables in the Skeleton, since you can see just about everything. A modular power supply is most definitely a wise choice for anybody interested in building a system using the Skeleton.

The Antec Skeleton is definitely not a case for somebody just starting to find their way around a computer. On the short term, and as a testing platform, the Skeleton performs well, and an enthusiast may truly appreciate the Skeleton. Overall, the Antec Skeleton holds promise as a high-performance and high-maintenance case, so for those who aren’t afraid of the latter, the Skeleton is an ideal chassis that looks like no other.