I can’t remember the last time I built a system where the power supply was mounted at the top, but I have to admit that I still like routing cables in this configuration. The cross brace was removed first once two screws from the back panel and side of the 5.25″ drive bays were out of the way. The power supply secured in place perfectly with the fan facing up to draw air in through the vent, but it can also be oriented with the fan facing down. 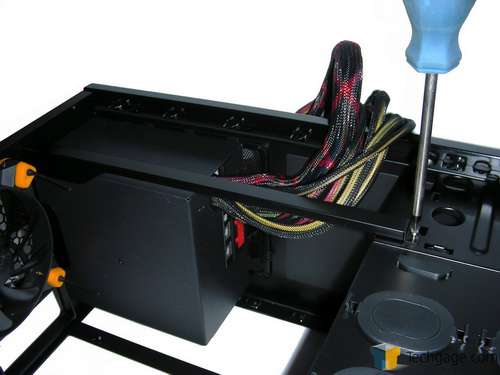 There were no problems to report with the motherboard and cooler either, although space was tight. The online manual goes into detail about how to install one of Antec’s all-in-one liquid coolers, so I knew that our Corsair H60 would fit easily. Removing the stock exhaust fan also required the controller to be removed from the back panel by pushing out on two small clips on either side. 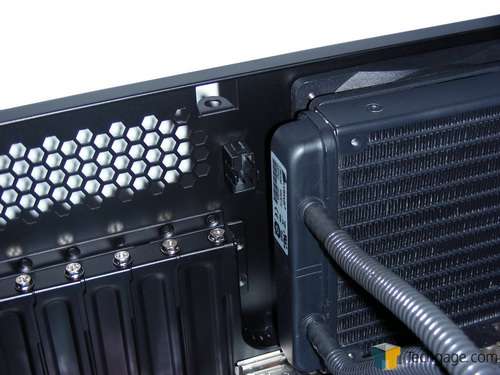 Installing hard drives was also easy. The silicon mounts need to be moved to the alternate holes in the drive tray to accommodate 2.5″ drives but our 3.5″ test drive installed securely through the bottom with the help of a screw driver. 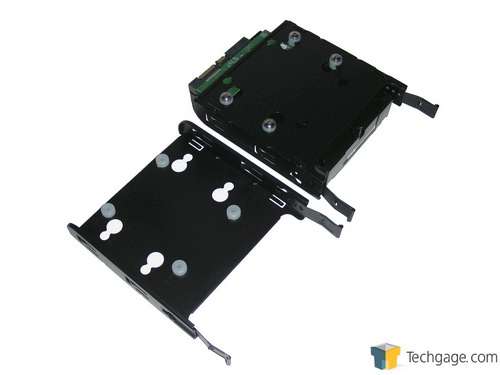 The suspension system was also tested with a drive tray removed. It made me a bit uneasy to have a drive floating in a case but there were no problems and the drive stayed in place surprisingly well when the system was rocked side to side and front to back – although I wouldn’t subject to much more.

Sadly, our 2.5″ solid state drive used for mock-up purposes was not available in order to test the drive trays and area on the motherboard tray, but both should go off without a hitch using the included hardware. 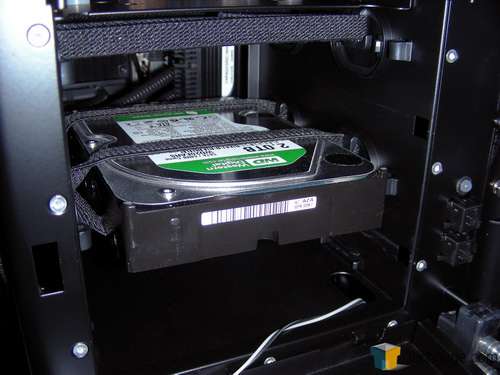 Even though the SOLO II is on the small side, users with large GPUs are in luck thanks to the elevated drive cages providing a whopping 15″ of room from front to back, which is more than enough for even a NVIDA GTX 590 or AMD 6990. Some of this space will be lost if an intake fan is installed in the bottom front area but not to the point that it should interfere with either card. 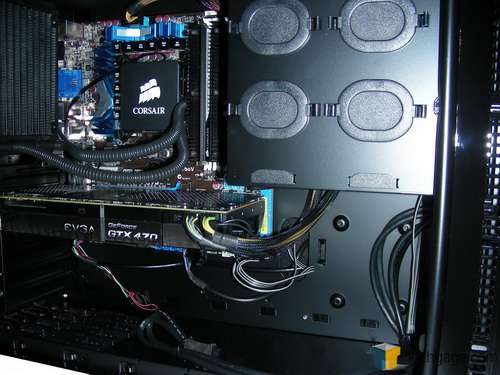 Using the drive rails that are secured to the floor of the case our (dusty) mock up optical drive slid into the 5.25″ bay without a hitch but required each rail to be secured with four of the included screws. 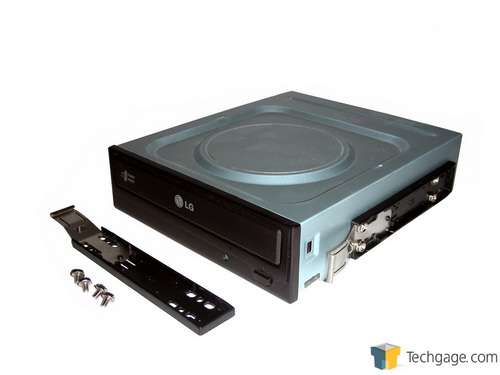 Finally, here’s a look at the finished product: 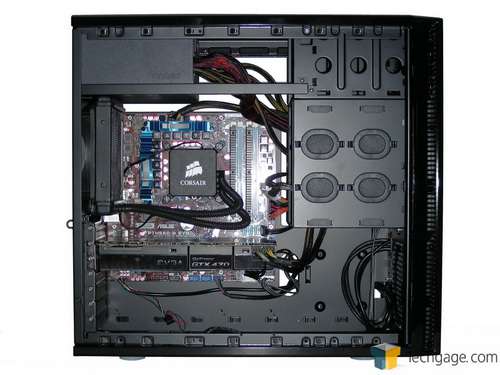 On the other side I made heavy use of the cable management hooks. One of them did pop out when too much strain was put on it, but choosing a different hook that allowed for a little extra slack remedied this.

There were no problems routing cables from the power supply or the front panel although running the audio cable through the hole in the motherboard tray cut it close as it just reached the header at the bottom rear of our test motherboard. 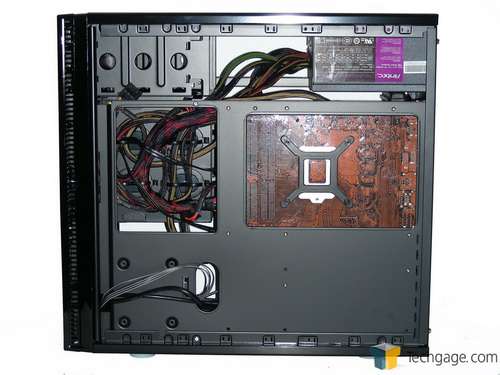 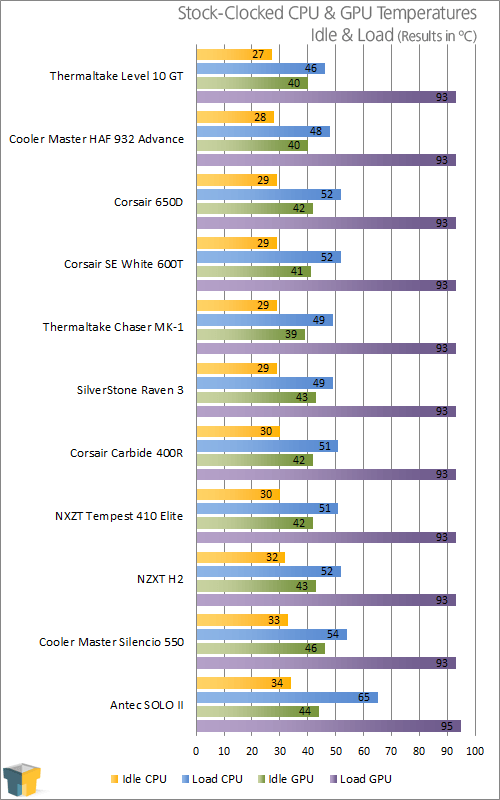 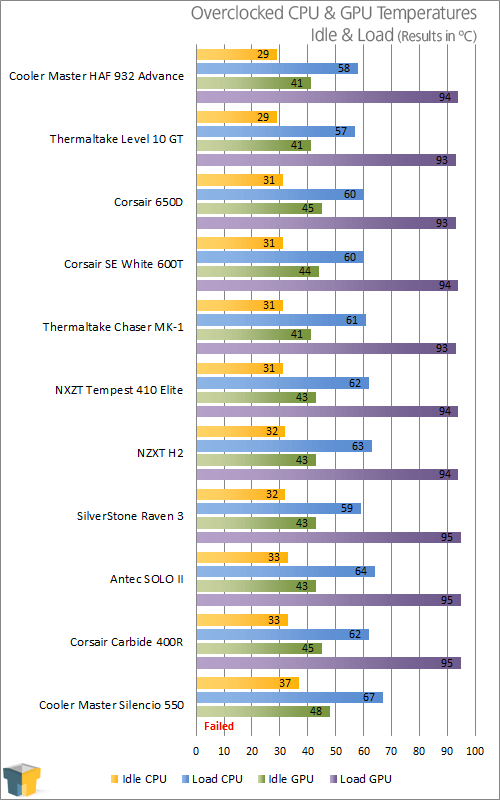 With only a single 120mm exhaust fan, or in our case the fan from a Corsair H60, it’s not surprising that the temperatures recorded with the SOLO II are higher than most other cases in our database. When compared to the competition in the quiet computing market however, the picture is quite rosy.

It beat out the Cooler Master Silencio 550 in all regards by at least 2 degrees and also kept our GTX 470 from crashing during overclocked load testing. The NZXT H2 wasn’t much further ahead with the SOLO II only trailing by 2 degrees during overclocked load testing of the CPU and a single degree between the GPU under the same test. This may not seem like much, but remember that the H2 comes with two 120mm intake fans on the front whereas the SOLO II doesn’t.

How could a case with less intake come so close to one that clearly has a more robust stock cooling setup? The sound dampening material. Antec has chosen to go with a plastic layer instead of the typical foam that many manufacturers use when building a silent case. This allows more heat to be transferred to the metal of the case and radiated outside instead of creating pockets of heated air.

Foam holds in more heat but also more sound. Even though the SOLO II was not noisy by any stretch of the imagination and allowed for overall system noise to be kept quite low, it did not much the sound dampening abilities of the Silencio or H2.

From build quality to installation to the test results, the SOLO II performed very well when compared to other cases in its intended market, but there are a few things to take into consideration before opening your wallet.