After spending some time with the Antec SOLO II, I’m going to say that we have a winner in loser’s clothing. This may cause a few people to pass it by if they see it on a store shelf, but hear me out.

On one hand, users will get a super-solid case with virtually no flexing in any of the panels or frame, loads of features and a case designed to be as quiet as possible while providing capable cooling in the stock configuration all wrapped up in an understated package. The SOLO II may seem boring to some, but it would be right at home in an office or used as a home theater PC.

If looks are your thing, the SOLO II has you covered if you tend to shy away from flashy lights and colors. Looks are subjective, but one thing that isn’t is the finish. Good luck finding a blemish in the paint on this case. It’s truly perfect and one of the best I have ever seen.

For those who need a case that will hold higher-end enthusiast components, there’s room for that as well thanks to the elevated hard drive bays. Having room for only three 3.5″ drives may not be enough for some, so expansion is somewhat limited. 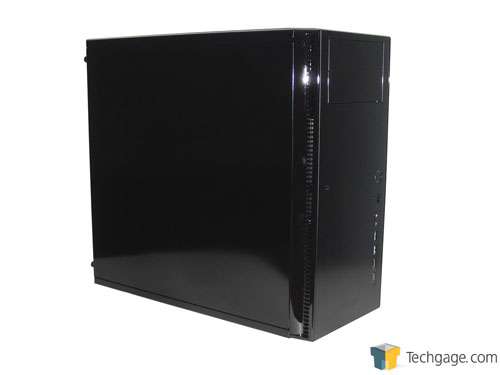 The only downside that I can see aside from the fact that installing an ATX motherboard is a lesson in patience (just for kicks I tested that out later) is the fact that the SOLO is currently available for ~$130, which is quite pricey when you consider that the NZXT H2 can be had for just under $100 and offers more room, a more robust cooling and less noise along with tool-less drive and expansion card installation.

Due to the price tag it would have been nice to see at least one front fan included. Adding in a single fan after, depending on the model, could push the price tag up to $150, which is a good chunk of change for any case.

Unfortunately, there was no time to run an additional round of testing to capture some unofficial temperatures with at least one fan added to the front of the case, but I feel confident in saying that the SOLO II would come close to, if not best the NZXT H2 in terms of cooling power.

Pricing aside, the SOLO II is a solid contender in the silent case market and one that I would consider myself if I were in need of one. It looks great, all components should install flawlessly, it provides a wide range of features to keep system noise to the lowest possible levels and would look great sitting beside an entertainment system as a home theater PC or in an office disguised as a workstation but hiding a hefty gaming system.