Testing was conducted with the TriCool fan at it’s low, medium, and high settings. The system the case was tested with had the following specifications:

All temperatures were recorded using. The graphs explain the gains from using the case with the fans at the lowest, medium and highest speeds. To test the GPU, I used Counter Strike Source’s stress test. For the CPU, I ran Prime 95 and used the In-place large FFT test. 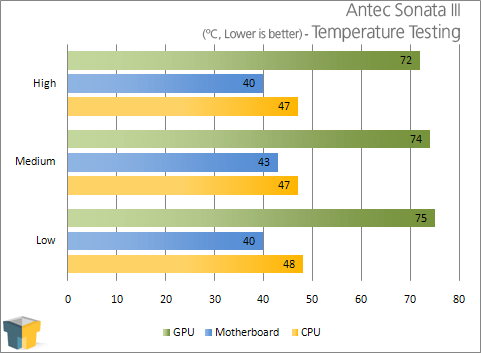 It might have been a fluke with my system, but there seemed to be no noticeable difference in temperature with the three settings. The sound increase is a lot when comparing low and high, for example, so I wouldn’t bother to change it from the default setting. 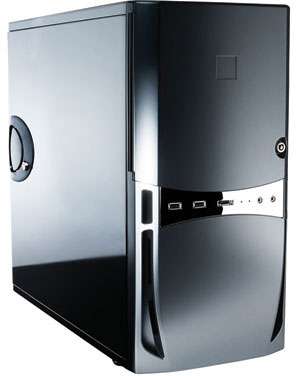 It’s honestly hard to rate this product. It’s not really bad for any reason, but it’s hard to really recommend. Essentially, the only thing that’s been updated is the front panel with an eSATA port (at the loss of Firewire), and the case’s bundled power supply. Looking online, you can buy the Sonata II for roughly half the price, but it’s no longer being sold by many retailers. I would say, if you need a beefier power supply (then again, 500 watts is plenty in most cases), getting the Sonata II or Solo makes more sense.

What made the case so quiet isn’t unique to it anymore. Most enclosures in the same price range use similar tricks to try to bring the noise down. If the power supply wasn’t a factor, there would be nothing special about this case.

Some improvements could have been made. I would have liked more of the features from Antec’s P180 series to have been included, but the power supply is reason enough to be partially satisfied. With that said, I have to admit there’s some elegance to the case’s design. It’s not intruding or flashy, but it functions. If you don’t need much more than that, there’s nothing wrong here.

My initial opinion of the case was fairly negative because it recycled so much of the previous case’s design. I wanted to tell Antec they could have done better than throwing in a new power supply and using a new piece of plastic for the front. But, after I thought about it, it’s not such a bad thing. Even though I, as well as plenty of other people will have no use for the included front eSATA access and would have liked to see Firewire there somewhere, it did help in future-proofing the design (as future proof as you can get with computers anyway). Doing something as simple as changing the front did enough to remedy the Sonata’s aging design. So I’m torn. This product will do fine for some people, but others with more demanding hardware and a heavier wallet will want something more.