When Apple first announced its revised Apple TV, I thought, “Wow, an Apple TV for $99!”. It’s no secret that Apple’s products tend to carry an “Apple tax”, so I was confused about this one. After all, the top current media players on the market cost just about the same. So what was the deal? The specs, of course… and perhaps the feature set.

So… the obvious downsides. The biggest one to me is the fact that the latest Apple TV doesn’t support external storage devices. Because the device is so small, I can understand this, but it does leave potential issues open. If your network is down for any reason, the Apple TV becomes useless. If you want to watch an online movie, but your Internet connection is down, you’re again out of luck.

That kind of situation is going to be rare, at least hopefully, but it’s still a real issue as far as I’m concerned. I’m not sure why Apple doesn’t allow people to use the mini-USB port on this unit for personal storage, but it would have been a great feature, if not for any other reason than to allow people to use their Apple TV where a network connection simply might not be available.

Another obvious downside is the lack of 1080p support, and to be honest, I hated that at first. But after I saw some of the movies available in HD, even via Netflix, I was sold on the fact that 720p isn’t so bad. Unfortunately, I don’t have immediate examples, given that I found them during personal tests and didn’t track them, but suffice to say, I was impressed. 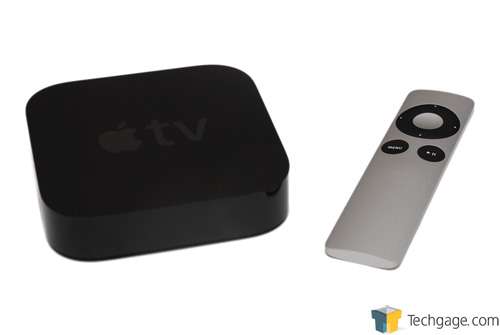 Support for popular media codecs is another area where the Apple TV falls short, but it’s one of those things that Apple’s done on purpose… it’s not an accident. The device supports all of Apple’s own formats just fine, and then a couple of others that can’t be ignored, like MP3. But for those who like FLAC audio or MKV video, you’re out of luck. There’s been rumors that some extra codecs play, but out of my massive and diverse collection of audio and video, nothing aside from content I purchased on iTunes did.

Though not a major hit, I do find the lack of support for iTunes LPs to be a bit strange, as it seems like the perfect complement to a device such as the Apple TV. In looking around the Web, I can see I’m far from being the only one who thinks this, so hopefully Apple will consider adding such functionality in a future firmware update.

Finally, one major hit to some might be the lack of overall support for other streaming services, like Hulu, Amazon Video, Pandora and so forth. Devices such as the Roku support all this fine, and with Google TV around the corner, there look to be many more devices soon that are literally filled to the brim with media support.

With these faults, the Apple TV becomes a very limited device, and to be specific, the people who wouldn’t find it limited are those who A) don’t mind owning more than one media player or B) use iTunes for almost all of their digital content. It’s really that simple.

Despite the limitations, the latest Apple TV is one of the nicest devices I’ve used in a while. The interface is clean, easy to use, and thanks to obvious optimization, browsing it couldn’t be smoother. All of the online services I used loaded up fast, and overall, performance across all of them was equally good. There were some instances when Netflix content would stutter, but I blame that more on my personal Internet connection and not the Apple TV.

What I have found, though, is that Apple doesn’t use the internal 8GB of NAND flash for Netflix or other services at all, because while I had Netflix content stutter at least once per every hour of video, the two movies I rented from the iTunes store didn’t stutter a single time while I watched them. That’s because the Apple TV caches some of the iTunes-derived video before you can even watch it, and because of that, it allows smooth playback the entire way through. Netflix on the other hand, looks to be 100% streaming, so if you have a semi-unreliable connection like me, you might experience the same.

It’s hard for me to call the latest Apple TV a “winner”, but for what it does do, it does it all extremely well. There’s some functionality clearly “missing”, but for iTunes rentals and Netflix use, not to mention image viewing, music playing and radio perusing, the device proved itself to be an excellent offering as far as I’m concerned.