Interfaces like the iPodâ€™s or the Zuneâ€™s have been praised for their ease of use and fast learning curve. I have to admit, when I used one of Archosâ€™ products years ago, it wasnâ€™t nearly as simple as pressing the power buttons and realizing how things work.

Even though some people may say the iPod has one of the best interfaces in the world, its control mechanism isnâ€™t totally self-explanatory. While you may be hard-pressed to find someone who hasnâ€™t heard of an iPod, anyone picking one up for the first time usually wouldnâ€™t realize they have to move their finger clock-wise and counter clock-wise to go up and down.

A touch screen interface is something thatâ€™s simple. Everyone can understand pointing at an object; itâ€™s even simpler than using a mouse. The execution is the hard part.

The 704 turns on by holding the power button down for about three seconds. Boot up takes about 17 seconds from the moment the LED turns on to when an image is displayed on screen. From then on, youâ€™re greeted with nine menu items. 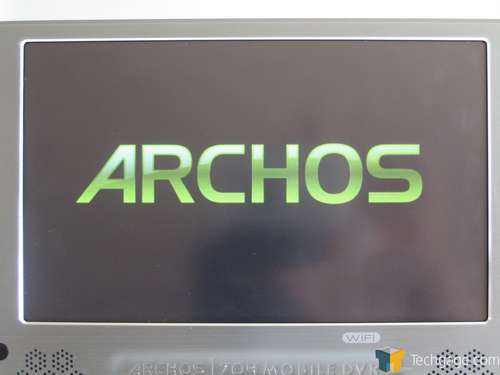 From left to right, they include: 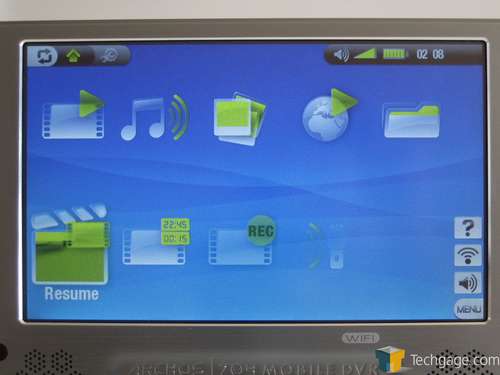 There are also other buttons on the main screen. On the top-left, you have the home and settings switcher. Pressing on ether the cycle button or the menu item thatâ€™s not highlighted (if youâ€™re home, the home icon will be highlighted, and vice-versa with settings) you can switch between the two screens. The bottom-right has a help button, an icon to enable the Wifi feature, and sound settings. The buttons on the bottom-right will change depending on the current menu, but the “Menu” icon will always remain, which brings up all of menus for every icon.

The top-right of the screen displays the current time, battery life, and sound information (the volume level, and if the speakers or headphones are outputting audio).

As you click on a menu item, an animation will play. A second click will bring you into that menu.

In theory, a touch screen interface shouldnâ€™t be hard to use, which it isnâ€™t. The 704 remains to be intuitive while offering a lot of options. All of the qualms I have with the interface is with the device itself. Even after calibrating the screen, presses would sometimes be inaccurate. There is no sensitivity option offered, so I would occasionally have to click two or three times get the device to do what I wanted.

It is possible to use the 704 without a stylus, but frustrating if you donâ€™t have long enough fingernails. Most of the buttons are big enough but actually pressing down with my fingers couldnâ€™t compare to using my nails or the stylus, which was annoying because thereâ€™s no where to put it (other than in the included pouch).

Iâ€™ve provided a short video (roughly 5 minutes and 13 seconds long) showcasing the 704-WiFiâ€™s user interface and features. Everything was controlled by using the included remote.

The TV Scheduler, VideoCorder, and AudioCorder features wonâ€™t be covered in this review, because they couldnâ€™t be accessed without having the extra accessories.