The 704 has a useful feature that I would love the see in more (American) players â€“ the ability to transfer files using Microsoftâ€™s MTP standard and UMS removable storage. Basically, you can sync the device with the newest iteration of Windows Media Player or drag files on with a file manager (on any operating system). Once media is on the device, disconnecting it and turning it on for the first time will force the library to update (Archos uses their own ARCLibrary indexer to categorize everything in an ID3 tag database). The trade off of being able to use any software you want is having to wait a few seconds for the library to update.

Since this is a device dedicated to playing video, I decided to put more weight in that category than any other.

In the video menu, youâ€™re given a group of three videos at once. When a video is highlighted, a preview will play in the thumbnail on the left of the selection. Itâ€™s worth noting that only videos in the video folder will show up in that section. If thereâ€™s a sub-folder, the content will only show up if you use the browse function. Starting one will usually take a few seconds at most, depending on the size. 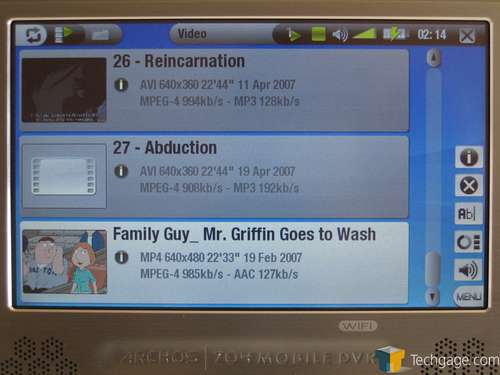 A slew of options are presented while videos are playing. Thereâ€™s a volume slider on the left-hand side of the screen, a progress bar on the bottom, and a familiar stack of menu items on the right. However, on the top-left thereâ€™s a button that will toggle the different view options, which are: auto, full screen, maximized, and original. There is also an entry in the right side that will go straight to a particular view setting instead of forcing you to go through them all.

Eventually, the OSD will fade away to allow you to see more on screen. If you wanted to get to a certain option, youâ€™re able to press on a certain area of the screen to bring up the menu closest to that edge (the right will make the volume slider visible, the bottom the progress bar, etc.). Pressing again will bring up all of the options.

The 704 is able to play a wide variety of formats, including MPEG-4 (including Xvid and Divx files) and WMV. Depending on the codec, the 704 may have trouble playing back certain videos for some reason (for example, only ten seconds would play for one of my AVI files encoded in Xvid, and I wasnâ€™t able to seek in others). Content scaled fairly well, which could have been a damper on its score.

H.264 and MPEG-2 (including VOB and AC3 surround sound audio) playback can be added with optional plugins (which cost $20 from Archos). Charging for MPEG-2 playback can be understandable because of the licensing fees (however, you are paying for the device), but Iâ€™m not aware of any cost to provide H.264 playback. It seems like Archos is trying to cash in on the “iPod-encoded” content available. Although DRMed WMV files will play, videos purchased from the iTunes store will not.

Music can be browsed by a folder structure or an ID3 tag database. While playing, basic ID3 tag information is displayed (the title, artist, album, etc.), along with album art. The options on the right-hand side allow you to create playlists and rate tracks, but thereâ€™s not much else to it. 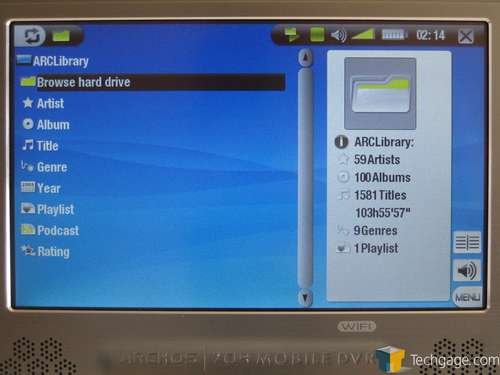 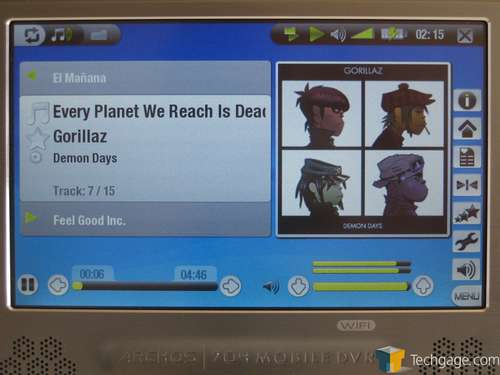 Unfortunately, lossless audio codecs are not supported. You could make the argument that lossless files take up too much space to be practical, but it still would have been nice to have the option, regardless (especially with 80GB of storage).