Testing how practical carrying the Archos player was one of my first goals when I started writing this review. I canâ€™t stress how big this thing is, but against my better judgment, I tried to use it day-to-day.

Since the only case you get is the pouch in the box and there arenâ€™t many accessories available, the only plausible way of carrying around the 704 is with the pouch.

With that said, actually using the 704 was a pain. I constantly had to take it out of my bag (where I carried it) to change songs or adjust the volume. Watching video while holding it was clumsy and not being able to put it down in certain places didnâ€™t help. Normally, I would just put my MP3 player in my pocket if I needed to set it down, but itâ€™s just simply too big.

The screen didnâ€™t hold out well in daylight. Granted, the viewing angles were pretty good, but the color would be washed out in the sun far too often. On top of that, dots appeared on the screen when it faced towards direct sunlight.

As I said before, this is definitely not designed to be a portable device. I would even go so far to recommend getting a more portable solution for everyday use.

I was able to get about 5 hours and 10 minutes watching video, and about 20 hours and 40 minutes of audio playback using the default settings (and WiFi off). The battery performance for audio and video (especially) disappointed me. Getting the same battery life as an iPod is unacceptable, especially when older players (like the Cowon A2, for instance) can get far more playback time, but itâ€™s partially understandable because itâ€™s driving a much bigger screen and the battery is still replicable.

The 704 retains the “Swiss army knife” rational of being a jack of all trades, but a master of none. Since itâ€™s not exactly what you would call portable, it automatically sets itself in a smaller niche. Thatâ€™s a shame, because it offers so much, but itâ€™s limited by its screen size when you want to have it with you.

I could understand using the 704 on longer trips at hotels or on airplanes or as a substitute for a portable DVD player. It may even be fair to categorize it as an internet tablet, but some of the features donâ€™t feel as polished as they could have been. Thatâ€™s not to say thereâ€™s something totally wrong with the execution, but itâ€™s hard to find a broad enough market for it. 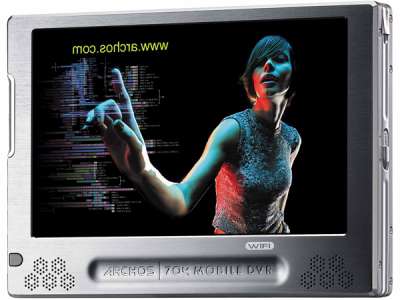 The 80GB hard drive may be small if you plan on putting your entire movie collection on it, but thatâ€™s partly missing the point. The best option would probably be transferring the videos you plan on watching, and using the WiFi capabilities to download others from an online service or from your own collection (which could be done with various third-party solutions).

I donâ€™t have any excuse for the extra accessories. You certainly are getting a lot in the package, but calling the product a DVR without being able to record content is a bit misleading on Archosâ€™ part. The product already costs a lot of money, so adding a few extra pieces wouldnâ€™t have hurt.

Would I buy the 704-WiFi? Probably not. Thatâ€™s not to say itâ€™s a bad product, but the market for it is such a small one that Iâ€™m afraid it might be lost in the shuffle. It does have a lot of uses, but it only totally satisfies a few. Since no form of Flash is included, the web browser is almost useless.

Itâ€™s too big for music playback and being portable, and needing to buy extra plugins and accessories to get extra functionality that should have been in the box doesnâ€™t appeal to me either. This could be perfect for a family that has kids (then again, would letting kids play with a few hundred dollars worth of electronics be a good idea?) or if you takes trips often and stay at hotels. Most of the complaints I have arenâ€™t terrible, and few (save the battery life and plugins) donâ€™t disconcert the product.