Arctic Cooling is soon to release a new GPU cooler called the Accelero. There are two versions of the cooler, one for top end NVIDIA and the other for top end ATI. I am taking a look at the NVIDIA version which I throw on a card that’s known for overheating often. Let’s take a closer look.


The card I chose to install this cooler on was a real no brainer. I purchased a BFG 6800GT PCI-E version early last year, and immediately had overheating problems. I was forced to RMA because the card reached up to 82°C for a joke. When I got the replacement card, it also got hot, in a sense. On first boot, the card sparked and flickered and killed a nice amount of hardware, then committed suicide. Needless to say, I RMA’d that card also. So, now being on the 3rd RMA’d card, I figured I couldn’t have problems like before. Well, the card still hits heats up to 80°C very easily. I have to admit, I am not too comfortable with any piece of equipment reaching those temps, so I look forward to seeing how the Accelero helps.

After removing something like 13 screws from the stock cooler, I pryed it off the board. After thoroughly cleaning the memory chips and core, I applied the thermal pads to each chip. Now, as you can see in the picture, I first laid them down with the paper still attached so that I could tear them off once they were all in place. That was a stupid move, because the pads do not stick to the chips like I imagined they would, so you may as well apply each pad one at a time. They don’t stick to the chips very well, but they do to your hands so it really can be frustrating.

Once I managed to get them to stay in place, I removed the plastic cover off the copper heatsink and set the cooler on the card. The holes lined up perfectly, so I just turned the card over and used the included screws to attach it. Overall, the entire installation process was easy, minus the thermal pads. Even those are not Arctic Cooling’s fault though, it’s just the nature of the pads. If the pads were just a tad sticker on one side, the problem would be lessoned. Once installed, it was very well secured to the card. It’s not the best looking GPU cooler out there, but we care more about the cooling aspect at this point. 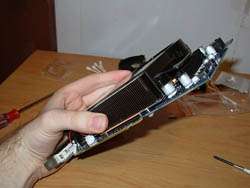 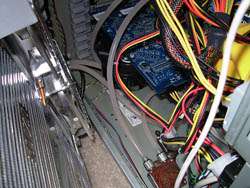 After I installed the card back into the computer, one thing became apparent very quickly. Because the card is 12CM high, I was unable to put the case door back on the tower. I was using the Titan Robela, and right inside the door are two large 120mm fans. If your case doesn’t have any huge fan in front of the PCI-E slots, you will be fine. Because the Robela has a radiator attached to the door though, it increased the depth. You could potentially be fine even if you do have a 120mm fan on your door. Either way, if you have the Robela, forget this cooler unless you want the door to be off all the time.