To test the potential of the cooler, I used two popular programs to stress the CPU to the limit, Prime95 and Super Pi. Here are the specs of the system that the cooler is being tested in:

Testing on the stock cooler involved using Prime 95â€™s Small FFT Torture Test and Super PI calculating PI to 32 million digits at the same time resulting in 100% CPU usage and maximum temperature. On the stock cooler, the results were an idle CPU temperature of 36ºC and under load (Super PI and Prime 95), and the resulting CPU temperature was 47ºC. Once installed the Arctic Cooling cooler showed a good improvement in idle temperature, bringing it to 32ºC degrees, a 4 degree drop over stock.

Testing the cooler under load resulted in a CPU temperature of 46ºC, a single degree difference over the stock cooler. Another fact that I discovered during testing was a quite noticeable drop in the noise level. This CPU fan is much quieter than the stock fan. This comes in very hand for those who have their computers in their bedrooms or in rooms where someone would be sleeping and need to leave their machines running all night, as I do. 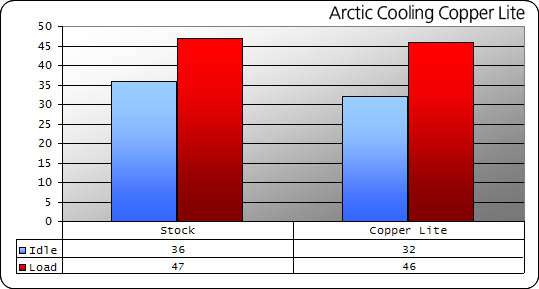 This cooler has a great bang for the buck for those of us still using Socket Aâ€™s. It provides extra cooling we need for modding and overclocking and also provides much lower noise levels if you happen to care about having a quiet PC. Installation can be completed easily, even by a novice user and all the results are proven. This cooler for its ease of installation and it’s better than estimated temperature readings and for its much better noise level I give it a 9 out of 10.

The only reason this product is not receiving a 10 rating is because of the limited instructions provided in the packaging, however they are not really necessary. If you still have a Socket A and are looking for a more efficient cooler then your AMD stock model checkout the Copper Lite CPU Cooler.

Rob’s Add-in: This seems to be a great cooler for the money, that’s lightweight and QUIET. Sadly, the temperatures captured in this review were all with the included Arctic Cooling thermal paste that was included. There was not any AS5 on hand, and chances are good that temperatures could be improved even moreso if you have that paste.

Even though installation is relatively easy, AC does not make it clear enough in the instructions how to mount the cooler on the specific Sockets it is compatible with. For instance, a clip must be turned around on the cooler in order to install on a regular Socket A, compared to a Socket 462. It’s just not immediately evident that the clip can be turned around, and could cause slight confusion.

Have something to say? Please feel free to comment in our forums, where you do not need to register to post about our reviews and articles.