While the Arctic Sound P531 is plug and play and allows users to start listening right away with the option of 5.1 surround sound, they will miss out on the various tweaks available that the software offers. In order to get the best sound possible from all media types, users should start by installing the driver from the included CD.

Once the system has been restarted after the drivers have been installed, users can then select their playback and recording devices from within Windows before moving onto the meaty bits of the configuration by selecting the new AC icon found in the system tray.

Sharp-eyed Techgage readers will notice that the interface of the software looks very close to that of the Corsair HS1 USB headset we reviewed back in October. This is due to both using the same audio engine, Xear 3D. For starters, the software gives users a reference of how many channels should be used based on what is being listened to by clicking on the question mark next to the “System Input” drop down. This will be helpful for those who may be novices and just want to jump in without having to tweak too many settings. For those who like to tailor their sound, there are many more options available. 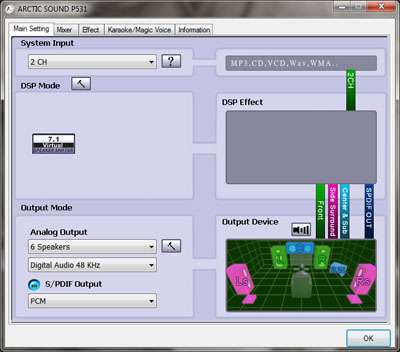 For most music, 2 channel output is the best choice, unless the source offers additional channels, and for movies, the 6 channel 5.1 output is more appropriate. There is also an option for virtual 7.1 surround sound, which adds left and right bass to the setup and allows the audio to be fine-tuned even further. Although it is available at all times regardless of the number of channels, it gives users the ability to change their position, and the position of the various speakers in relation to them by rotating the entire setup or manually repositioning each one. 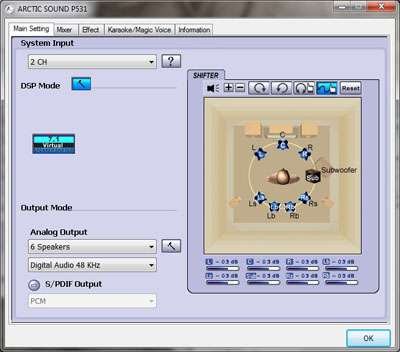 More standard features are the ability to increase or decrease your levels for your playback and recording devices as well as a graphic equalizer that allows users to fine tune the sound based on personal preference by changing the individual frequencies or using one of the presets. Any user defined configurations can be saved and loaded when needed. On top of this you can apply effects to the sound such as sewer pipe but this seems to be more of a novelty than anything else. 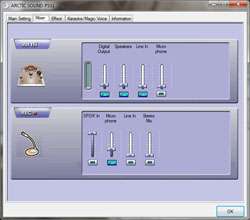 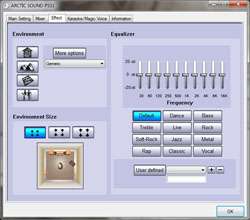 Another feature that I see as a novelty is karaoke and Magic Voice. I have no idea who would purchase a gaming headset so they could belt out Sweet Home Alabama but that person will be able to do so and also manipulate the way their voice sounds. If sounding like the devil or Alvin and The Chipmunks is your cup of tea then this section is for you. 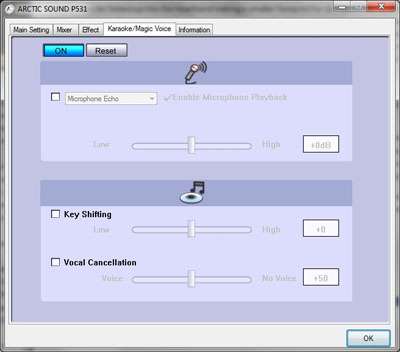 Aside from some demo media that showcases the surround sound capabilities of the headset, one final piece of software to note is the inclusion of the AC3 filter in a separate folder on the driver CD. This GNU licensed software allows you to decode any audio file on the fly and make use of all supported audio channels. While I am not that much of an audiophile that I need all of my audio to be the best of the best, I did play with the application for a while. Unfortunately I could not get it to work with any of my usual media players and will chalk it up to being unsupported in Windows 7 as stated in the setup instructions found on the official website. 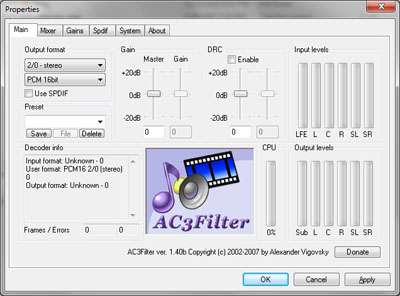 Ok, who is ready for some subjective testing?