by Brandon Mietzner on January 4, 2013 in Gaming

Since 2007, the Assassin’s Creed series has taken us on one heck of a wild ride. The latest title is simply called Assassin’s Creed III, and it looks to be the most ambitious one yet. Will the questions surrounding Desmond finally be answered, or will this be another minor stepping stone in the oceanic enigma that is the AC story?

Assassin’s Creed III continues the events of Assassin’s Creed: Revelations, where Desmond, Rebecca, Shaun and his father William have entered the temple ruins of the first civilization. After briefly exploring, Desmond collapses from a bleed-through effect and the team quickly puts him back into the Animus where he is taken back to the events of his ancestor Haytham Kenway.

The year is 1754; Haytham has just arrived at England’s Royal Opera House, where he’s setting out to procure an amulet from another patron – one that’s believed to be a key for opening a temple belonging to the first civilization. This section of the game wraps up a tutorial for climbing and free running, and once completed, Haytham boards a ship bound for America. During the voyage you’ll learn basic combat, investigatory skills and get to play a few mini games. 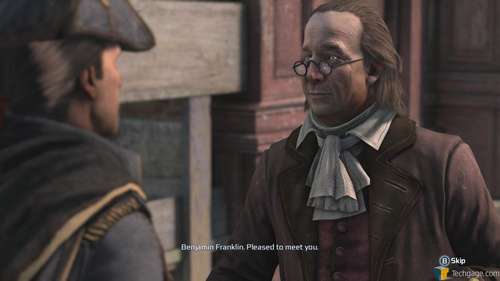 Upon reaching the New World, Haytham sets out to make contact with those of his order, recruit new members and find the lost temple. During the course of his journey he rescues Kaniehti:io – a Native American woman – who belongs to the Mohawk tribe which is about to be sold into slavery. Haytham along with his fellow companions also rescue Kaniehti:io’s associates, putting her in his debt. Months pass with no word from her, but realizing that she may be the key to ultimately achieving his goal, Haytham actively pursues her.

After finding the temple and not being able to enter, Haytham and his group change their priorities but never forget the ultimate prize. During this transition, Haytham and Kaniehti:io develop a romantic relationship – one that results in a child on the way. Realizing what kind of man he is, Kaniehti:io, decides this is not the world she wants their child to live in. She then heads back to her people and gives birth to Ratonhnhaké:ton.

The year is now 1760 and Ratonhnhaké:ton is now six years old. While out playing with his friends, he encounters Charles Lee. Charles is presumably sent to the Mohawk tribe to find out what it is that he and his comrades need to gain access to the temple. After a brief altercation with Charles, the boy is left unconscious and distant from the battle. 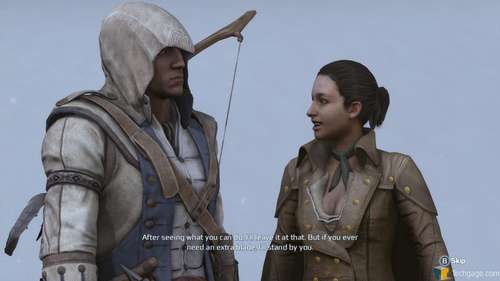 Charles has no luck in finding what it is he was sent for and proceeds to burn the Mohawk village to the ground – among the casualties is Ratonhnhaké:ton’s own mother. Fast-forward several years, and he’s now a young man, and a skilled hunter. The village elder hands Ratonhnhaké:ton a crystal-clear sphere, and upon touching is transported away by Juno, a being from the first civilization. During the vision quest she shows him what he must do to prevent his people from being decimated and who he must seek to achieve this goal.

Upon reaching his destination, he meets Achilles. The old man is not excited to have a new pupil, but seeing how unwavering he is in his resolve, he reluctantly takes him under his wing to train him in the ways of becoming an assassin. Ratonhnhaké:ton spends many years training, waiting and never forgetting the man who took his mother away from him. After some time, Achilles decides it is time to fix up the manor and to give Ratonhnhaké:ton a new name, Connor.

While Achilles and Connor are in Boston, the American Revolution is in its infancy with protests and the occasional brawl. However, today is March 5, 1770, the day of the Boston Massacre. The two do their best to prevent this atrocity but their efforts are fruitless. Connor spots Lee and then realizes that he and his group are responsible for causing the atrocity. Knowing what he must do, he trains harder both mentally and physically to give him the skills, the tools and the wisdom to achieve his goals and kill his targets. 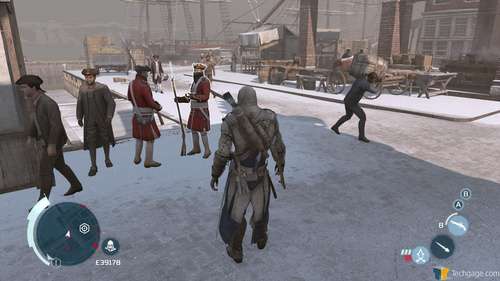 Assassin’s Creed III is approximately 12 memory sequences long in the main story, which can take anywhere from 15 to 60 hours depending on how many of the side missions you do. The sequence of events that I have just described is approximately 35% of the overall story, which consists of 5 memory sequences that took me around 14 hours to complete with side quests. From this point, the game starts to open up allowing you to fix up the manor, find new settlers for the small town, go hunting in the frontier and much more.

There are many things that are locked out until you get further in the main story, like side missions for the townsfolk, upgrades and et cetera – essentially, you can’t do everything at once. The side missions take up a majority of the game, but the story will end the same regardless of which ones you tackle.

Newcomers to the Assassins Creed series will be happy to know that the tutorial is very streamlined and gets you playing right away. The story during this sequence is a little dry, but it’s important to not take it as a sign of things to come. Obviously, having to tell a story in a duality such as this has its challenges and even though Ubisoft admitted that the story of Desmond was not very well-thought-out, it still did a pretty bad job. On the bright side, the stories of Haytham and Connor were very well-written and makes up 90% of the overall story. 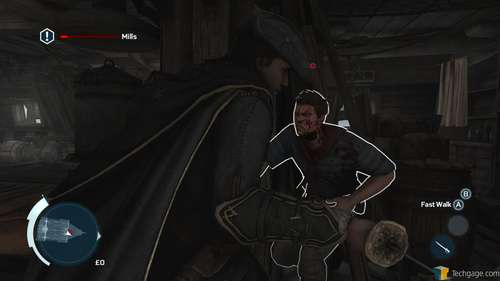 Haytham and Connor’s story is told before, during and after the events of the American Revolutionary war, which is a unique perspective that has not been told before in a videogame of this magnitude. Their stories are told in such a way that they draw a parallel to historical events but do not interfere with the events that they intertwined with. Their story, though original, is nothing if not a little bit on the side of grandstanding and convenient; these two characters were always a part of critical events but always played a support role. That aside, I did thoroughly enjoy how the story and events unfolded.