by Brandon Mietzner on January 4, 2013 in Gaming

Since 2007, the Assassin’s Creed series has taken us on one heck of a wild ride. The latest title is simply called Assassin’s Creed III, and it looks to be the most ambitious one yet. Will the questions surrounding Desmond finally be answered, or will this be another minor stepping stone in the oceanic enigma that is the AC story?

Just like all the previous Assassin’s Creed games, Assassin’s Creed III does not skimp on the details. Everything from the buildings, newspapers, propaganda (on both sides), uniforms and et cetera have all been painstakingly created for this game. Now, I know that there are some people who thought that this game took a pro-American stance on the Revolutionary War, but I don’t see it. Shaun, the in-game present-day IT guy who inputs all the information about locations and events for you to read, is British and provides a perspective from that background. Shaun is not always putting America down, either; he points out the flaws in both the British and the French governments of the time as well. If there’s bias, I sure didn’t see it .

The biggest change that veteran players are going to see is that the controls and the interface have been drastically reduced. Although I would agree that the controls are better than the game’s predecessors, I do still think that they can be a bit tricky when trying to perform a jump. The interface is the biggest problem with the latest update; it doesn’t remember where you are when you’re crafting, reading emails, changing settings or anything else – you always go back to where you first began. There are also times when it will flag something as being unread, when it isn’t. Another oddity – with the PC version, you cannot quit directly to desktop like you could with the previous games. 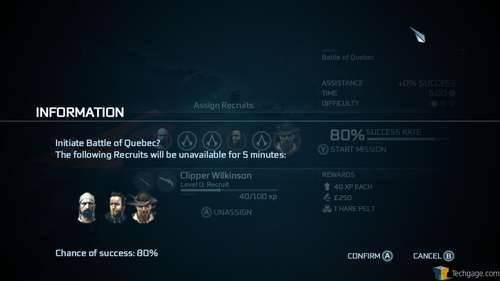 Assassin’s Creed III is not without other blemishes; the foremost of these problems are the bugs, which I have confirmed affect all platforms. Take for example a mission involving Samuel Adams. You can go out the door and spawn directly inside of an enemy, prompting them to attack you immediately. This bug was so severe, that reloading the save wasn’t enough to avoid it – I had to restart the game from the beginning. 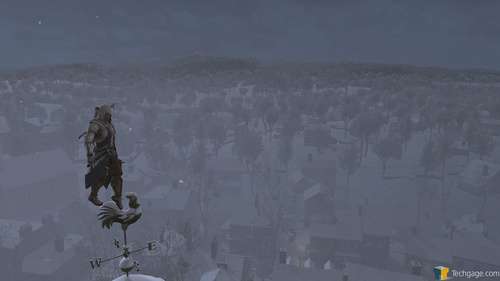 As far as minor bugs go, there are at least a dozen if not more that I experienced. These range from mission icons missing on the map, invisible walls in the middle-of-the-road, people and items not spawning, camera flake-outs when certain objects are around, people (enemy and NPC alike) spawning and de-spawning in front of you and much more. This game has been out for a little over a month now on the PC and even longer on the consoles, so it’s rather appalling that these bugs haven’t been ironed out by this point.

Assassin’s Creed III has a big focus on combat,  however stealth elements can play a role in both primary and side quests as well. The combat is very straight-forward and is balanced well between the different weapons and combos that you can use and the tactics that the enemies can use.

Stealth is not so finely honed; the game still requires the player to take a lot of risks when on stealth missions but does not provide many options for you to achieve this goal. It would have been nice to have more than just a hide and seek mechanic when it comes to stealth. Instead, it is memorization that gets the player through these bits, and that takes up a lot of time. That being said, I do appreciate that you can now run through a building to lose a pursuer, as it helps cut down on the time spent trying to evade enemies. 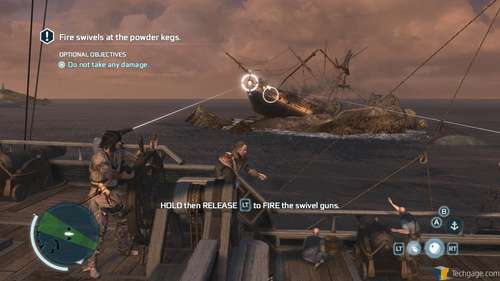 I mentioned before that there are many side quests that can be done in the game. These range from hunting, gambling, naval combat, recruiting and working with your townsfolk, item gathering, traversing tunnels to find quick travel points, recruiting assassins and et cetera. The hunting, townsfolk and the naval combat missions are the diamonds in the rough amongst all these new additions. The hunting allows you to gather skins and other resources to sell to other merchants which can be quite a lucrative business if you know what furs are popular at the time. The naval combat gives you a break from the standard gameplay, thus providing a more strategic style of combat. The townsfolk all provide an interesting individual story and had me connecting with these characters on a greater level than previous Assassin’s Creed games. This is the first time in this series that I felt compelled to learn more about the support characters than I had trying to finish the main story.

The PC has the upper hand when it comes to the graphics, offering improved textures, TXAA and tessellation. The TXAA and tessellation are DirectX 11-specific features, and note that TXAA is only available on NVIDIA hardware. The only feature that I felt had any major impact was TXAA; tessellation was only used for snow and though it does look better when comparing screenshots, the impact is less noticeable when playing. The DirectX 11 features cannot be turned on or off directly, and you have to change your texture quality to something lower than very high to turn them off. Just like previous Assassin’s Creed games, this one provides proper multi-monitor support. 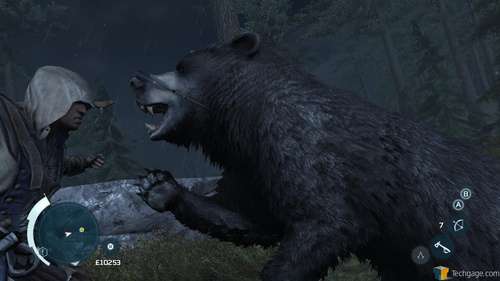 Another detail that Assassin’s Creed III does not miss is the music. This time around, instead of an Italian opera, there is authentic Native American music. The Native American music along with the rest gives the player a very rich and immersive experience. The voice acting was well executed as well; everyone had the proper accent for their character and conveyed the proper emotion at the proper time. I do think that the person who was voicing Connor had a few dry spots here and there but I can only imagine how difficult it must have been to play a character that had learned English in that time period.

When first starting up multiplayer you will notice that it is not attuned to your single player graphics setting nor is it as robust. It lacks multi-monitor support, has a reduced draw distance (which is very noticeable) and the DirectX 11 features do not seem to be enabled. The classic modes of deathmatch and team deathmatch (team objectives) are here, along with a few new additions such as Wolfpack, where players are given an objective to kill as many NPC’s as possible within a certain time limit. 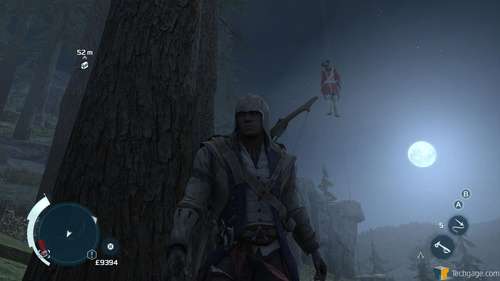 Domination mode is basically capture and defend, where you have to take control of certain points on the map and protect them from the other team. The multiplayer also has its own system for gaining levels and abilities; the levels go as high as 50 but the abilities stop being unlocked at around level 25. Unfortunately, the game is limited to only 8 players max, so the best you can hope for is 4vs4. All though these matches were interesting, the limitations and focus on quick matches made this a forgettable experience for me.

In the end, Assassin’s Creed III has a story that is worth experiencing, however, this is not the most polished Assassin’s Creed game to come out of the gate. There are many bugs and other annoyances that can make it rather difficult to play; it felt like the game was rushed to meet a fiscal and story critical date. I think it should have received a little more TLC before being released, so if you’re on the fence about picking it up, I would recommend you wait until issues are fixed before doing so.