Intel’s X79 platform may seem a little dated by this point, but it in fact remains the best choice for those needing to build the biggest, baddest PCs around – especially with Ivy Bridge-E likely 9+ months away. Complementing X79’s goals perfectly is ASUS’ P9X79 PRO, a motherboard that offers a rich feature-set in both hardware and software.

You might have noticed that on the last page, I expanded a bit more than usual (alright, a lot more than usual) on different aspects of the EFI. In the past, I admit, this one one area where our motherboard reviews have been lacking. With the advent of EFI, vendors have been going the extra mile with their on-board features, and for the most part, they’re a lot more enjoyable to explore and use – hence, we’ve lately felt a little more obligated to talk about them.

In a similar vein, another area we’ve failed to cover well has been software. I’d like to think it’s for good reason, however, because until recently, most of it has been… well let’s just say I preferred to avoid it. Again though, much like EFI, the software side of things is changing, with each vendor working hard to improve their offerings in order to deliver somewhat of a unique experience to their users.

ASUS has not surprisingly been one of those companies, and so far, I’m truly liking what I’m seeing. For the sake of convenience, ASUS bundles every Windows tool into its Ai Suite II, although to give some flexibility to its users, any component can easily be installed or uninstalled, as seen in the following screenshot. 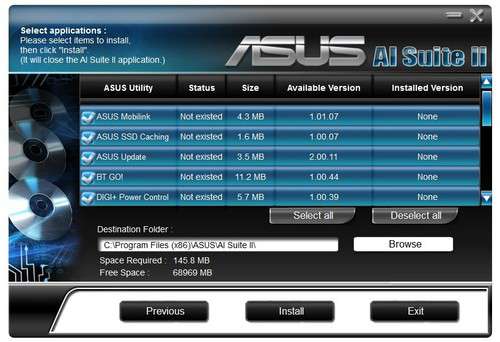 Once opened, Ai Suite II looks modest – it’s a simple bar with a couple of options. It’s not until you begin to explore any of these options that the program expands and allows you to go right to town tweaking.

Over the course of this page and next, we’ll be taking a look at all of the notable features that this app offers. However, it’s important to note that what’s made possible with Ai Suite II is due mostly to on-board components, and as such, all of these options can also be tweaked in the EFI.

As has become common over the years, ASUS allows you access to every overclocking option from within Windows. The perks here are obvious – there’s the added convenience and the added ease. Personally, I still prefer to conduct all of my overclocking in the EFI since I hate applying a setting that crashes the OS, but it’s nice to have both options. And it’s great if you’re not much of an overclocker but wouldn’t mind a little boost. That’s where the “Auto Tuning” option comes into play, as seen in the following screenshot. 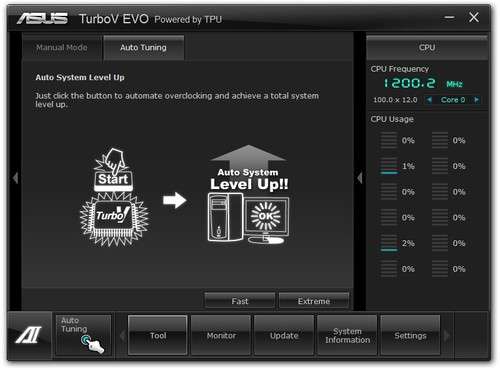 There are two levels of intensity offered here, though even “Extreme” is likely to be considered 100% stable, since ASUS is not in the business to crash people’s computers. In a quick test with that Extreme option, the board overclocked our Core i7-3960X to 4.4GHz – up from 3.3GHz stock. That is, without question, a nice overclock for as much effort as it required. Though I didn’t benchmark using those overclocked settings, they proved stable in a 3x loop of Futuremark’s latest 3DMark.

For manual tweaking, you can move on over to the “Manual” section. If you used the Auto Tuning option first, the applied settings will remain here, so that you can simply continue tweaking to take things a bit further. 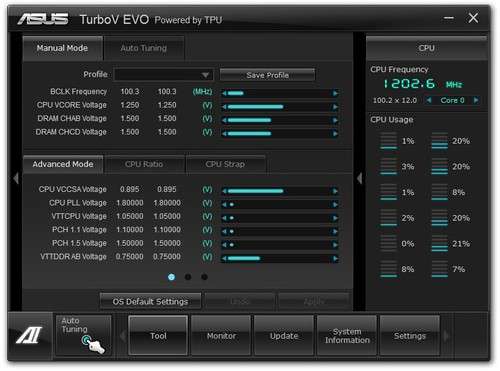 You might have noticed that this software lacks something the EFI offers: the ability to click on a value and type in a new one. However, unlike the EFI, it’s much faster to increase values using the Windows application (in terms of fluidity from start to finish), so it’s not too much of a problem. In addition, it’s doubtful that too many people are going to be applying a mammoth overclock right from the start with this tool, but rather take the first step in the EFI, then boot into Windows in order to continue tweaking. So that you don’t have to load up Task Manager or some other CPU monitoring app, you can see to the right of the screen above the usage for each core – another nice touch.

Next up, a feature that’s not for the feint of heart: DIGI+ Power Control. This is a feature that ASUS takes great pride in for a couple of reasons. For starters, and to our knowledge, it was the first vendor out the door with a digital design, and second, the company feels that its solution remains the best out there. We (not surprisingly) lack the testing equipment that can range in the hundreds of thousands of dollars to test each solution appropriately, but that doesn’t prevent us from being able to appreciate their designs.

The reason that a digital design is so important is that analog inherently lacks precision – you may choose a certain voltage in the BIOS/EFI, but variance is bound to occur. By contrast, digital offers an unparalleled level of precision. Further, an analog design suffers a weak software to hardware translation layer, as it requires an OS driver to function – digital does not. 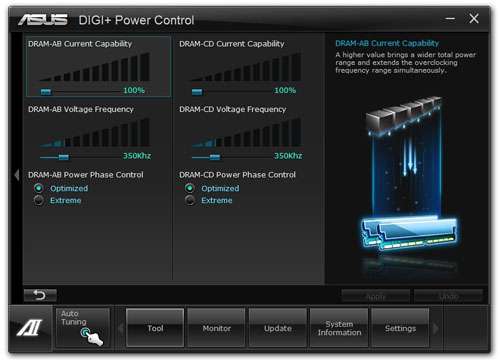 This all said, while it’s clear that DIGI+ Power Control could provide a nice benefit to overclockers, it can also be used by those who simply want to tweak their PC to be as power-efficient as possible, even if the goal is to retain stock CPU values. As alluded to above, though, this feature is not going to be for everyone – it definitely requires some knowledge of the various power functions on a motherboard.

ASUS’ particular design involves dual hardware ICs (TPU for overclocking and EPU for power-efficiency) on the motherboard that tie into the CPU’s PWM and VRM, along with the DRAM’s VRM. ASUS’ boards that support a CPU equipped with an iGPU gain DIGI+ support for that as well. The overall goal of this implementation is to offer the utmost accuracy, along with enabling the perk of allowing the user the same tweaking options via the EFI or inside of the OS.

One feature in particular that stands-out here is CPU Power Phase Control. By default, motherboards ramp up the usage of power phases based on the current CPU load. However, for overclockers or tweakers, that might not be the most efficient design, given the board might use more or less phases than they’d prefer. 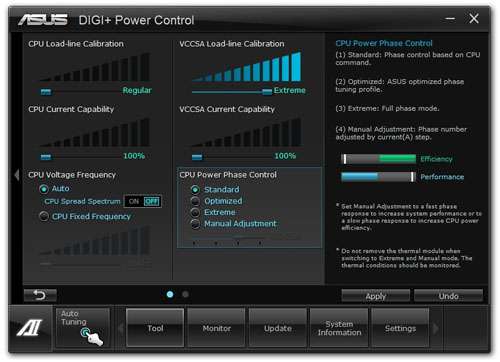 That’s where the further three options here come in; Optimal, Extreme and Manual. The latter is used by those who want to limit the number of phases that will be used, although that will result in a complete lack of power-efficiency if not used and understood properly. Extreme pegs 100% of the power phases at 100%, 100% of the time (that’s a lot of 100%s), perfect for overclockers that peg their CPU clock speed to the same value 100% of the time (that’s the last 100% for a while).

What about the overclockers that want to retain their C-states and other innate power options available on their CPU? That’s where “Optimal” comes in. This, like “Standard”, will ramp up the power phases when required, but rather than be controlled by CPU commands, it’s controlled by the DIGI+ controller which accurately measures the CPU load. At idle, one phase is likely to be used, while 2-4 could be used during regular use, and the full 8 (or whatever the maximum is) when the CPU is really burning away on a project.

Personally, most of these options, I wouldn’t touch, but Power Phase Control, I certainly would if I were overclocking – and maybe even if not. “Optimal” sounds like a good sweet spot.

Where the TPU-backed TurboV EVO is designed to give overclockers the best-possible experience in pushing their hardware to the next level, EPU has opposing goals in mind – it caters to those looking to make their PC as energy-efficient as possible (I’ll avoid going into how this is a little ironic for an X79 motherboard). Naturally, because TPU and EPU’s goals contrast with each other, only one can be used at any given time. 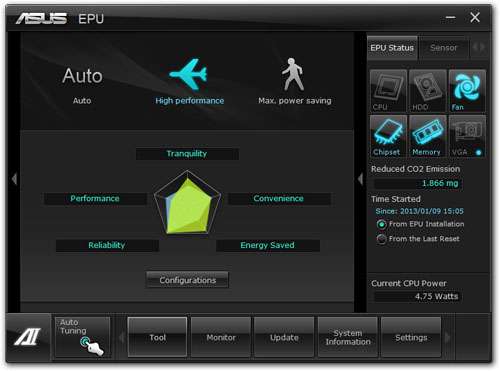 From this screen, users can choose to either run their PC in high-performance mode, which spreads its strengths around almost evenly, or Max. Power Saving, which aims to reduce performance, noise and power, and increase energy saved. The tool also gives you a status on how much CO2 emission you’ve failed to produce on account of using the power-saving mode. “Auto” would run the PC settings at normal.

Also helpful here is the “Sensor” tab up above, which you can see here. Generally speaking, it’s not hard to find sensor read-outs in Ai Suite II, but they’re especially convenient here since you can immediately see some of the differences caused by the different modes.