As more devices claw for more bandwidth on the home network, you’re going to need a wireless router that can keep up. Under review today is ASUS’ Tri-Band RT-AC3200, capable of support two 5.0GHz AC bands and a 2.4GHz N band. There’s plenty of spectrum on offer for devices to use, so let’s see how it performs!

In the wireless race taking place in our homes, the speed of our routers always seems to outpace that of our devices. This is the cycle. As this game of catch-up is played, the connected devices in our homes have consistently increased, all vying for the wireless bandwidth so graciously provided by our router or access point.

Now I won’t pretend to know how our lives will accept and adapt to this new world if “IoT”, and I’m pretty sure that my stove and thermostat won’t be consuming all that much bandwidth, but we know where the industry is heading.

We’re becoming more and more connected, and those devices need a gateway to the outside world. Enter the wireless router. One technology that has sadly remained static has been Ethernet. For years, gigabit Ethernet has been more than adequate, but with storage devices increasing in speed, and large high bit-rate files becoming the norm for multimedia, it’s time for a faster protocol. Until something faster emerges however, we can always layer our connections, one right beside the other.

Ratified by the IEEE in January of 2014, Wireless AC has been the de facto choice for users looking to setup their own wireless network at home, or upgrade their existing one. The thing with wireless AC is that there are many different numbers that one might see when shopping around for a new router. AC1750, AC1900, AC2400, AC3200, and even AC5300. Like a double rainbow, what does it mean? Actually it’s fairly simple once you know what the numbers represent.

ASUS’ RT-AC3200 is a departure to what we’ve come to expect from our routers. The most common AC routers in peoples’ homes have three antennas. There are some that have two, and others that have four, but three is most common. The RT-AC3200’s big brother even has eight, and looks like it came directly out of science fiction. ASUS designed the RT-AC3200 to have six antennas, three for transmit and three for receive.

The RT-AC3200 makes use of Broadcom’s XStream tri-band technology and is powered by a Broadcom BCM4709A. With 256MB of onboard RAM and Broadcom driving both the 5 GHz and 2.4 GHz radios, ASUS gave the RT-AC3200 plenty of horsepower to provide performance. It’s also capable of file, 3G/4G (with an approved dongle), and print sharing.

Larger than most routers on the market, the RT-AC3200 measures 11.4 x 7.4 x 2.28 inch (WxDxH). Not small but not obstructively large either. However, what the user trades in desk real estate they make up for in features. Unlike the routers that came before it, ASUS decided to only allow the RT-AC3200 to be oriented flat on a surface. The AC66U and AC68U both came with a stand to allow them to be stood up on a desk; with the size of the RT-AC3200, that’s not really a possibility.

The front of the RT-AC3200 contains all the LEDs we’ve come to expect on a wireless router, as well as buttons to toggle the Wi-Fi and LEDs on and off. Also found on the front of the router is a single USB 3.0 port, hidden behind a rubber flap to help keep dust out when not in use. On the back of the RT-AC3200 we again find everything we’ve come to expect and nothing else. There is a USB 2.0 port, buttons for WPS, power, and to reset the router to factory defaults. Also found in the back are a set of four gigabit LAN ports and one for WAN.

We won’t spend a ton of time on the web interface but it does deserve some attention. Compared to the Synology RT1900 we looked at earlier this year, the ASUS UI leaves a little to be desired. The polish simply isn’t there. That being said, one thing that can be said of the ASUS is that it’s robust. While the UI we praised Synology for is absent, all the features (minus the app market) are there and then some.

ASUSWRT is easily the most robust and feature-rich router UI available to date. With an easy to read network map, showing connected devices, type of connection and IP address, locating a device on your network is made easy. Intelligent bandwidth sharing makes setting up your QoS extremely simple, allowing you to grant priority status to torrents or Netflix.

Other features of ASUSWRT are dedicated guest Wi-Fi networks, VPN server and client settings, extensive parental monitoring and restriction settings, traffic analyzers, AiCloud, dual WAN support and device sharing. Features that most anyone could possibly want on their home router can be found on the RT-AC3200’s ASUSWRT firmware and easily configured through the intuitive web interface.

The RT-AC3200 has come a long way. As ASUS worked on its firmware, the router became more stable and its wireless connectivity became more reliable. The Tri-band capabilities of this router aren’t noticeable until a second device is connected to the network. If no more than one device on your network will be online at any given time, tri-band in general can be avoided. It’s when more devices are connected that tri-band truly starts to earn its keep.

With a pair of independent 5 GHz channels to connect to, each device has its own channel to communicate over. As more and more devices are added to the network, they share two 5 GHz bands instead of the standard one. Factor in the RT-AC3200’s 2.4 GHz band, and you now have three separate bands to operate over. 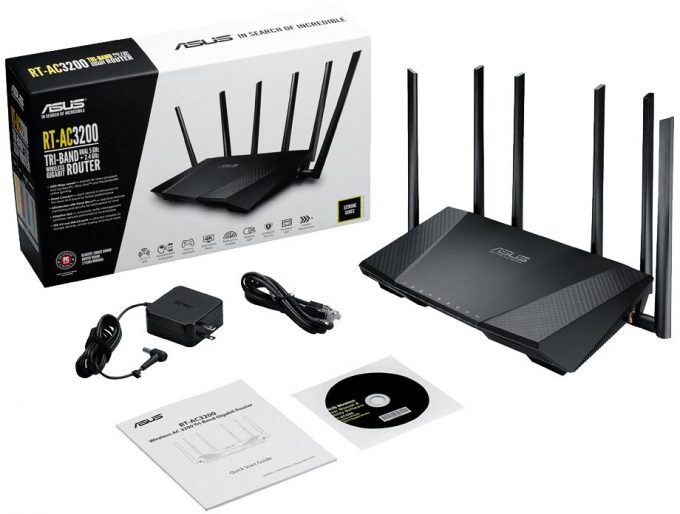 The simple question for routers like the RT-AC3200 is “do I need one”? That’s not something we can answers outright, but my personal opinion is that an AC1900 router, like ASUS’s own stellar AC1900, or the Synology RT1900ac, would be more than what most users would need. Should anyone reading this still decide to pick up the RT-AC3200, we’re more than confident that you will be satisfied with the performance and reliability of the router.

ASUS has one of the better user interfaces on the market and through it, offers an impressive amount of tools and configuration options. Available as of publication for around $215 US, the RT-AC3200 offers a considerable amount of router for the money. There are newer models available from ASUS, but one of the advantages with ASUS is waiting for their firmware to stabilize. They achieved this some time ago on the RT-AC3200 so for those looking for a fast, stable, gnarly looking router for your home or small office, you could do a lot worse than this one.