The “Ultrabook” term is often associated with super-small notebooks, but ASUS is here with a model to remind us that 15.6-inch models can be included, too. We’re taking a look at the S56C, a Core i5-3317U-powered offering that includes 6GB of memory, a 24GB SSD for caching, and is built like a tank.

All of the software that ships on the S56C also ships on the X202E, so for the sake of not writing the same thing twice, there will be a rehashing of what was said in our X202E review. If you want to blame something, blame the fact that I copy and paste like a wizard.

Alongside the release of Windows 8 came the need for companies like ASUS to re-think the way they manage software on their products. Take bundled software, for example. It’s hardly been atypical to see vendors load the desktop up with shortcut icons for applications it believes you should notice right away, but with Windows 8, the desktop is no longer the focus, and the clean aesthetics of the “Modern UI” simply don’t favor such clutter. We’ll talk about what can result from this in just a short bit.

Also changed is the way companies are able to handle restoring the PC to a factory-fresh state. Previously, companies would employ their own, sometimes not-so-elegant solutions. However, because Windows 8 includes similar functionality, some companies, including ASUS, have merged the two recovery solutions together. The result is a recovery solution that runs through Microsoft’s Windows 8 solution, but is tweaked for ASUS’ purposes – aka: to install the bundled software and drivers.

For the purpose, this particular notebook has three partitions sitting next to the other two that are for personal use. These consist of a 300 MB “EFI” partition and dual “Recovery” partitions – one weighing in at 600 MB, the other at 20 GB. The price we pay for being able to recover our PCs the easiest way possible. 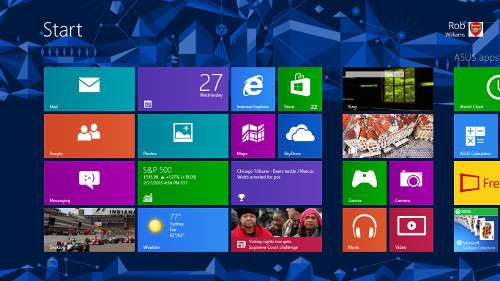 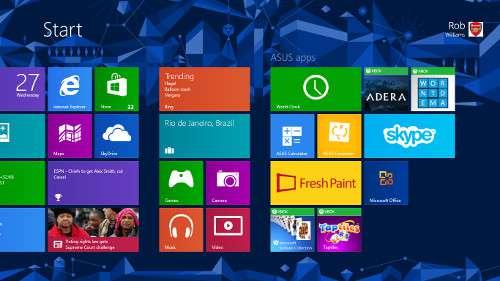 Note that the Start screen and desktop background are customized here because I logged into my Microsoft account. A fresh install without logging into a Microsoft account would look a little bit different (no doubt with a picture of an ASUS notebook on the desktop, not F1 cars).

Let’s peak at the “All Apps” screen: 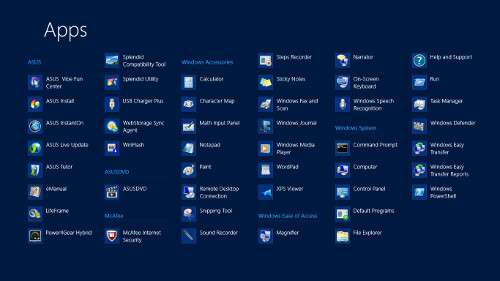 There are less apps pre-installed on the S56C versus what we saw on the X202E; the main omissions being Smart Gesture and Instant Connect. Most everything else is here, however, including ASUS Tutor, the app I raved about in our X202E review. Allow me to recap.

To me, ASUS Tutor represents what Microsoft itself should have included with Windows 8. 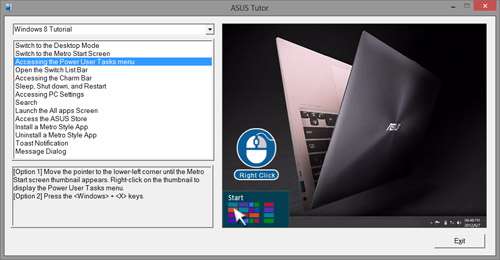 It looks simple, but looks can be deceiving. I’ve been using Windows 8 since October, and despite being experienced, I originally decided to humor myself and go through the tutorial here to see if I could learn anything new. I did. The tip shown above shows you how to access a menu by putting your mouse to the bottom left-hand corner of the screen and then right-clicking. This menu has many different shortcuts to various parts of the system, including Programs and Features, System, Device Manager and so on. To access these things before, I’ve had to go to the Start screen, type in a few letters, click on “Settings” and then the program. Yet – here’s a method that’s about 5x quicker that Microsoft itself couldn’t even be bothered to tell people.

Let’s take a look at the other software, shall we? One sticking point for me across all of the software was with the “Live Update” tool. This tool automatically starts after a fresh install and downloads updates from the Internet – it’s completely typical for any pre-built PC. This one, however, manages to hang definitively – something I’ve experienced on both the S56C and X202E. 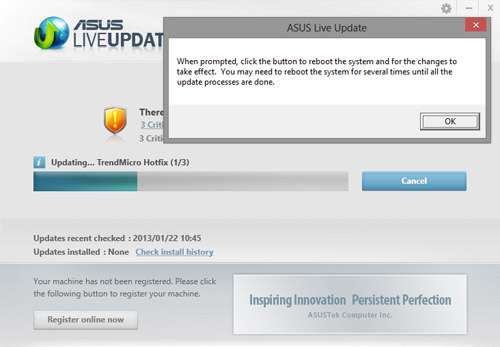 You’ll note the pop-up box in the shot above – it tells you to click “OK” to reboot the system whenever the updates are finished. The problem is, these updates never managed to finish for me. The shot you see above was actually captured after an hour of it sitting on that exact spot. The kicker: the updates actually are applied, as a reboot will continue on with the next one. For some reason, the software doesn’t cleanly wrap one update up to go onto the next. I’m willing to bet that this is an issue that will be remedied in time.

ASUS has long prided itself on its power-efficient products, and a popular stature for its notebooks has been “Power4Gear”. This is in effect a simplified power manager tool, though the profiles created have been fine-tuned by ASUS itself. You’re able to fine-tune them further with the Power Options tool in Windows, or adjust simple things with ASUS’ tool. 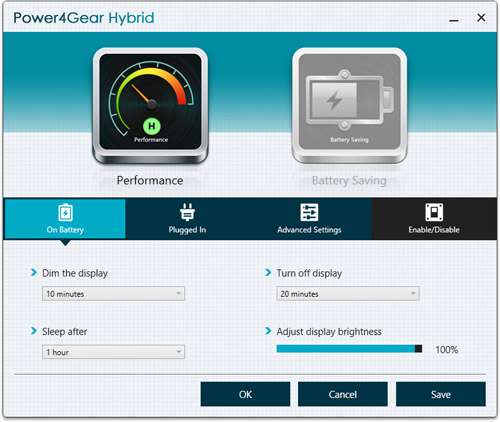 It’s important to note that Power4Gear overrides the default power options in Windows, so if you need anything specific changed, you’ll need to edit the special Power4Gear profiles and not those defaults (Performance, Balanced, et cetera). If you choose one of the standard Windows power modes, Power4Gear will simply default back to its own after a reboot. Thus, if you use Power4Gear, you must stick with it.

“ASUS Installation Wizard” speaks for itself. It lists all of the official software that ships with the notebook and allows you to both uninstall or install any and all of it. From what I can tell, this is not an updater – those duties would be left to the Live Update tool mentioned above. 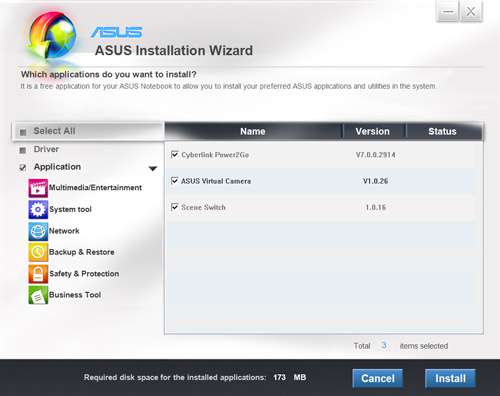 In addition to the software mentioned above, ASUS ships two pieces of “bloatware”; Microsoft Office 2010 and McAfee Internet Security. Office remains quiet until you open a compatible document up, but McAfee will never shut the heck up until you A) activate and purchase it or B) uninstall it. If you like sporadic pop-ups, you’ll love McAfee.