The mobile market has sure changed over the course of the past couple of years. Prior to the launch of Apple’s iPad, few people would have ever guessed that tablets had a real future – and to be frank, a lot of people (including me) continued to think that even after it launched. Yet, here we are, sitting among a market that’s on fire with tablet releases but declining notebook sales.

The fact that the tablet market had the potential to adversely affect the notebook market was a secret to no one. The original iPad was released in spring 2010, and Intel’s Ultrabook concept was announced in the summer of 2011. This timing was no coincidence. To compete with the onslaught of tablets, and not to mention Apple’s MacBook Air, Intel’s Ultrabook designs insisted on super-slim, light-weight notebooks that performed closer to regular notebooks than netbooks.

Since the launch of the first Ultrabook models, things have fared well enough for Intel, but the notebook market as a whole has continued to decline. That’s not helped by the fact that Ultrabooks, due to their strict design requirements, tend to be more expensive than models that most non-Apple vendors focused on before. That’s resulted in some vendors deciding to tweak the formula to deliver a better product even if it means it doesn’t quite earn the Ultrabook status. Case-in-point, the model we’re looking at today: ASUS’ X202E. 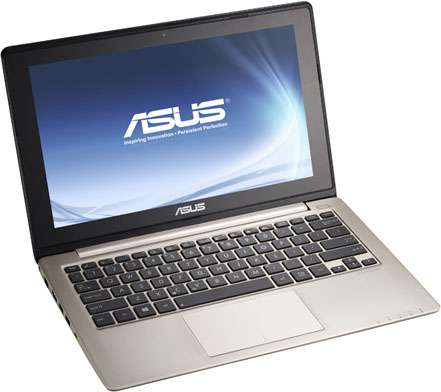 Does this look like a notebook that retails for only $500?

ASUS’ goals with its X202E are ambitious. It’s attempting to deliver an affordable, small-sized notebook that delivers on three important bullet-points: performance, aesthetics and features. Throughout the review, we’ll see just how well it manages to hit on each one of those, but for now, let’s take a look at the tech specs and get a feel for what we’re being offered here:

For its price-point, these specs are just about what we’d expect. We should point out though that unlike some of Intel’s higher-end processors, the i3-3217U does not feature Turbo. So what we have here is a modest dual-core i3 that tops-out at 1.8GHz. That, coupled with the fact that the 4GB of RAM is accomplished with one stick (meaning, single-channel operations) should give you a good idea of what to expect performance-wise from the X202E.

One of the best features of the X202E is its touchscreen, which throughout all of our testing proved to be a dream to use. While touchscreens on notebooks may be completely common a year or so from now, they’re not now, so that does help this particular model stand out from the crowd a bit. Do you need a touchscreen? Maybe not, but after using one for a certain length of time, your opinion may sway. I’ll talk more about my personal experiences later. 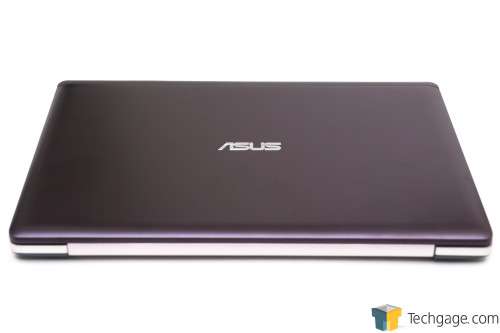 While the X202E’s hood is metal, the rest of the exterior build is comprised of hard plastics. No part of the notebook lacks durability, and none of it certainly feels or appears “cheap”. This is especially true with the touchpad, which I usually worry about on notebooks at this price-range. It’s simply one of the better ones I’ve ever used.

Despite its use of simpler colors, the purplish hue on the notebook isn’t quite as deep as it appears in the above photo. As ASUS itself manages to suffer the same issue with its own photos, I can’t feel too bad. The X202E is also available in black, pink and pearl. I’m totally jealous of whoever it was that received a pink sample from ASUS.

The hood of the X202E isn’t the only part of the notebook that received a brushed aluminum treatment: so did the working area. I’m pleased to note that the effect isn’t quite as pronounced as it is on some notebooks I’ve tested in the past, where it almost feels like you’re getting micro-cuts on your finger when you slide along it. 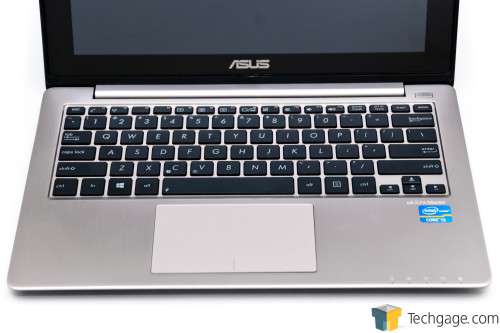 A chiclet keyboard design is employed here, which is quite fine by me. I’ve come to like the design more than any other as it’s very easy to type on and (for me) results in less tpyos. Due to the fact that we’re dealing with an 11.6-inch notebook here, it should come as no surprise that there is no numpad. That does lead me to a small beef, however: the fact that there is no alternate numpad for use with the Fn keys. Granted, a lot of people never use numpads, but if you ever do, either for gaming or work, it’s really annoying when there isn’t some makeshift option available. 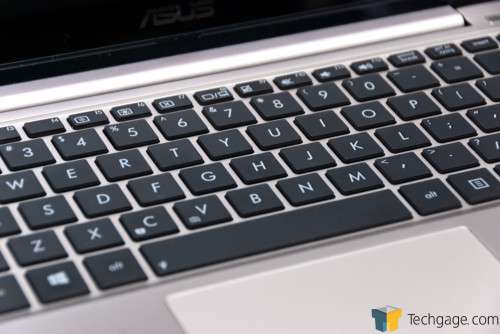 In relative size to the rest of the notebook, I’d wager that the touchpad is a perfect size, and going further, it has a perfect feel, as well. On lesser-expensive notebooks, it’s not uncommon to have to deal with a touchpad that’s built using less-than-ideal materials which in turn makes it hard on the fingers, but the X202E managed to escape that fate. It’s super-smooth and doesn’t get warm after long use – it’s a winner in my book. 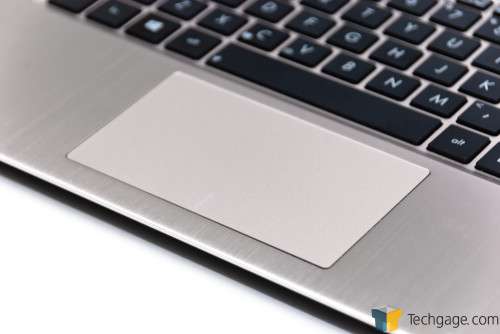 On the left side of the notebook, the power adapter port kicks things off, to be followed by Ethernet, HDMI, USB 3.0, USB 2.0 and Kensington lock. 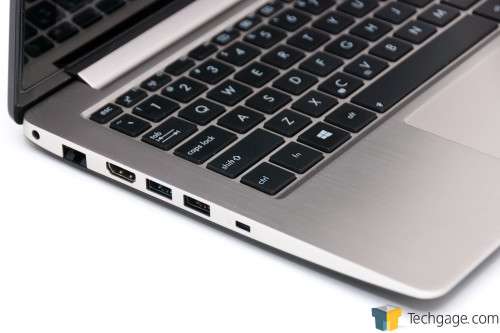 Moving over to the right side and starting from the left, we have an SD/MMC card reader, In/Out audio combo-port, another USB 2.0 port followed by a VGA port. Overall, a nice collection of connectivity options with nothing notable missing. 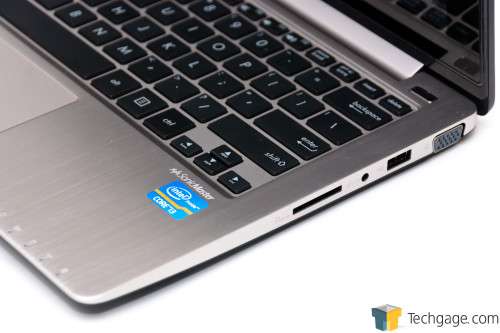 To wrap up our glamour shots, let’s take a quick look at the front-right corner. In order, these LEDs represent: power on, battery charging, hard disk activity, WiFi enabled and, of all things, caps lock. 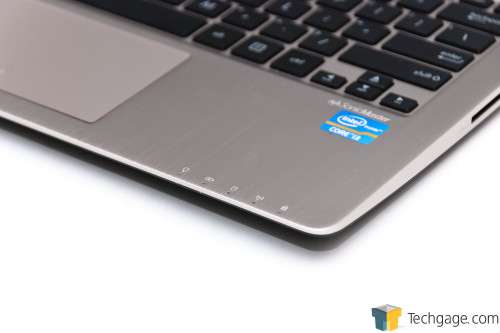 In terms of both aesthetics and design, I can’t find a real fault with ASUS’ X202E. Things are made all the better when its modest price-point of $500 is taken into consideration. Are there any “gotchas” waiting around the corner? We’ll soon find out. For now, let’s tackle software.