Great smartphones don’t need to break the bank, which is something ASUS’ $200 ZenFone 2 proves a couple of times over. This 5.5-inch Android phone sports a 1080p display, packs 2GB of RAM under its hood, has a good-performing Intel SoC, and even offers dual SIM capabilities. Let’s check it out.

We’ve now taken a look at both the hardware and software, so what about performance? It’s time to tackle that, but I’ll first start out with relaying actual experience, rather than just jump into numbers.

The ZenFone 2 is the first Intel-equipped smartphone I’ve ever used, and I admit that at first, I wasn’t sure whether I’d find it slow or not. The phone’s $200 price tag encouraged certain thoughts, as well. After over a month-and-a-half of use, though, I can honestly say that I’m very impressed with the performance of this phone, and that I expected it to be a lot worse.

While most Android smartphones (and tablets, for that matter) seem to suffer from certain app lag before I know it, I’ve yet to experience that with this phone. I should note that while I’ve largely been using the SuperZen ROM, which removes a bunch of the bloat, I didn’t find the phone any slower with its stock configuration. The phone simply seems to be very optimized; or, it could be that the Intel Atom SoC used in this phone is not as poor as some who jump to conclusions (including me, in this case) tend to believe.

That all said, this phone from a benchmarking standpoint is not going to be as impressive as some other current phones, but it still does perform well in its class. Since I haven’t recently benchmarked other comparable phones, I benchmarked the ZenFone 2 using largely the same benchmark suite that we tested out NVIDIA’s SHIELD TV and Tablet with. Those sport chips that are designed for gaming, so some of these results won’t come as too much of a surprise.

See? Not much of a surprise. Even so, the Intel and PowerVR combo will enable some good gaming – just not on par with what some top-end chips, including NVIDIA’s Tegra, can enable. Yet again, for a phone of this price point, the performance is to be expected.

On the first page of this article, I mentioned that ASUS touts the ZenFone 2 as being one of the fastest charging phones on the market, able to avail 60% in a mere 39 minutes. Of course, this is something I had to test out.

I do need to reiterate one thing, though: the charger that comes in the box of the ZenFone 2 needs to be used to take advantage of this quick-charging feature. That’s because the charger outputs at 18W, much more than most others do. This means one thing that will be obvious when charging with it: the phone is going to get quite warm. In some scenarios, that could be a small price to pay. 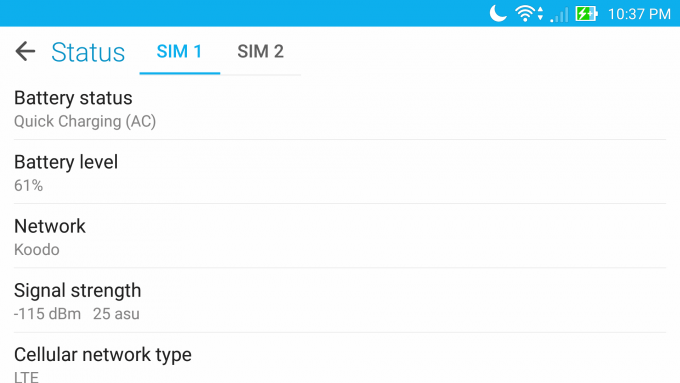 To test the quick-charging feature, I stressed the phone until it got down to 6% battery-life, and then shut it down. After the phone cooled, I booted it back up, at which point it sat at 5%. I then plugged in the charger and monitored where the battery-life was every 15 minutes. The results are:

It took 45 minutes to see an even 60% increase, so I have a feeling ASUS is measuring the “60 in 39” from the phone at 0% or 1%. Nonetheless, some great results. It’s comforting to know that if you goof and forget to charge your phone, a mere half an hour will almost half-fill the phone’s battery.

Another interesting claim by ASUS is that the ZenFone 2 can handle LTE speeds at up to 150Mbps. That’s impressive, but more impressive would be finding an area where speeds even close to that can be attained. In my lowly east Canadian town of Fredericton, New Brunswick, I managed to hit ~51Mbps down and ~20Mbps up.

Since we’re nearing the end of the review and I still haven’t touched on the ZenFone 2’s camera, I’ll do that now. During the time I’ve had with the phone, I didn’t put too much emphasis on photo snapping simply because it became obvious quick that this phone’s camera isn’t going to impress too many people. Yet again, I have to pull the “What else do you expect from a $200 phone?” trick out of my hat.

Below are nine random photos I shot where I had no intention of making sure the image came out as good as it could – aka: I used it like a normal person. HDR was not enabled, and in many cases, neither was the flash (due to not being distracting). Overall, the camera featured in this phone gets the job done, and could look a lot worse.

Given the ZenFone 2’s price point of $200, it’s hard to come up with a major complaint. It’s as if ASUS had something to prove with this particular model, because it’s a well-designed product that offers a bit more than we’d expect. It might be held back by the Intel SoC in some cases, but as I mentioned earlier, during normal use, the last thing I thought of was that the phone was slow – any lacking performance wasn’t even noticeable while I was at Intel’s Developer Forum last week and used the phone like a mad man.

Highlights of the phone include its 1080p screen, which comes in at 401ppi. It’s crisp, colorful, and offers a number of tweaking options to make it look better in different scenarios. It even includes dual SIM capabilities, which can prove to be a boon to anyone who travels over the border a lot or requires two SIMs for business or some other reason. Of course, it’s hard to ignore the fact that this phone can also have 4GB of RAM – a feature most high-end phones don’t even have. That to me, though, is proof that ASUS wanted to push its name into this ultra-competitive market hard, because I can’t help but feel like 4GB is going to be considered overkill for the next while.

If there’s one thing that’s stuck with me that I could consider a complaint, it’s that the phone’s touchscreen is sometimes a bit finicky. I’ve really only noticed this when entering a pin to unlock the phone, and I’ve been told that it’s probably because I’m holding the phone so that my palm is touching the side of the display slightly, which backs up what I had previously thought. Holding the phone in such a way that it allows me to type the pin on my opposite hand never exhibited this issue; only when I gripped the phone to type it in with both hands. An odd complaint, and one that most may not see, but I wanted to mention it nonetheless. 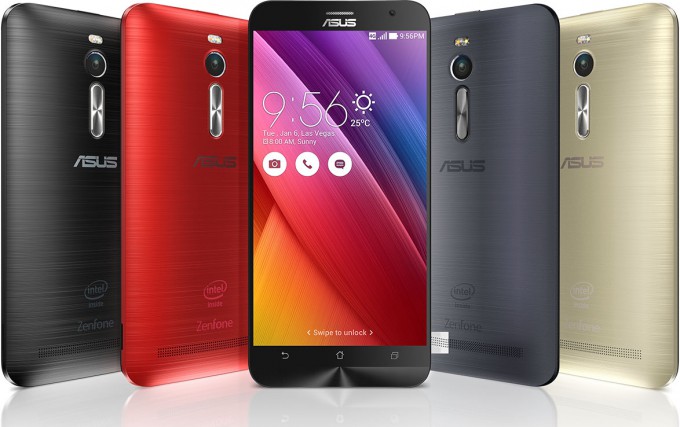 If you’re in the market for a new phone and don’t want to spend more than $200, ASUS’ ZenFone 2 is an awesome offering. Those looking for a bit more performance might want to consider OnePlus’ 2, although for the extra $100 it costs, the 64GB model ZenFone 2 could be hard to ignore (especially when the OnePlus 2 doesn’t have a microSD slot.)

When I purchased the $200 first-gen Moto G a couple of years ago, I never felt like it was a “great” phone. I knew there were far better options out there had I wanted to spend two or three times as much. I sure wish a phone like the ZenFone 2 existed back then. The ZenFone 2 is $200 like that Moto G was, but has capabilities that go far beyond it – from a bigger full HD screen to dual SIM to having a ton of RAM (and not to mention more storage) to having a far better camera (which goes to show how bad that phone’s camera was) to having ac wireless, and so on and so forth.

For its price point, ASUS’ ZenFone 2 is a seriously hard smartphone to beat.