ASUS kick-started their CES announcements two days prior to the official show start, and to say that a few interesting products were unveiled would be an understatement. At the event, we saw a hard push for multi-touch technology, a slew of Eee products and even an entire computer inside of a keyboard.

With CES looming, the early meetings are starting to take place. First on our list for this year’s events was ASUS’ Access Life conference, and what would an ASUS event be without roughly 97 new products that all carry the Eee badge?

In all seriousness, Tuesday afternoon’s press conference shed some light on the future of ASUS’ netbook product line. Giving us insight on future technologies including the something very similar to the Apple-made-popular “touch” interface, ASUS is clearly not resting on the success of the netbook craze that they practically started with their original Eee PC. Looking back, practically every netbook out today can play the “in your face card” to that original Eee, but its introduction has set the industry on fire and the extreme number of companies offering their subtly-different-from-everything-else products is proof enough of this. 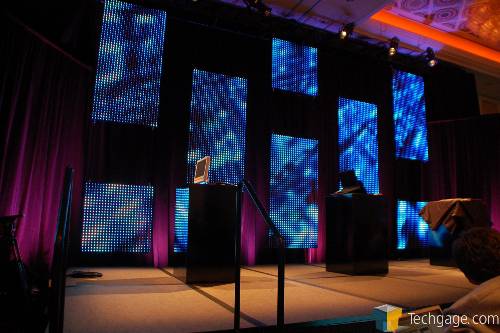 With a supreme focus on the bullet-point advantages of netbooks, ASUS’ CEO and chairman Jonney Shih started out by reminding everyone in attendance that their growth over the past decade has been incredible. Rising from $1.1 billion US dollars in revenue in 1998, ASUS posted a whopping $22 billion in 2008â€¦ not exactly small gains. As the well-deserved back-patting began to wrap up, we began to see the future of their netbook line up. 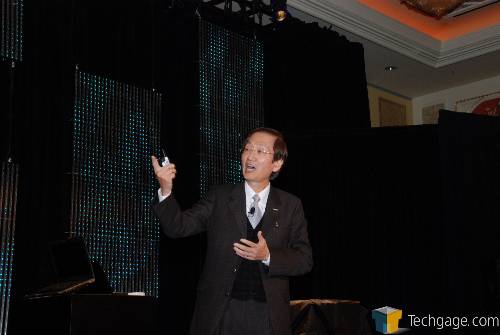 ASUS’ first major announcement was one that surprised us a bit. Bringing out the super thin S121, equipped with the world’s first 512GB SSD drive, Mr. Shih commented when asked about pricing, that the S121 would cost “quite a bit”. Luckily this netbook will have the SSD as an upgradable option so those of you without actual live money tree can afford said netbook. Look for availability in the coming month. 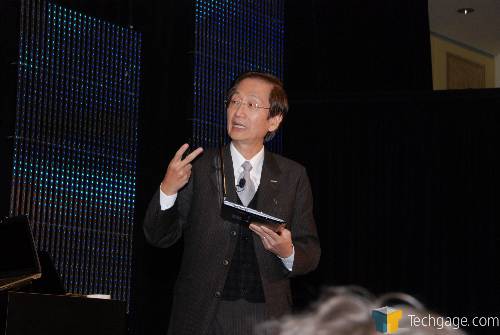 We also caught a glimpse of Microsoft’s own Dave Fester demoing the fruits of collaboration between his company and ASUS by showcasing a netbook running Windows 7 smoothly. Using Microsoft’s Windows Live, he was able to conduct a real time video chat with a member in the audience as well as place a phone call to a cell phone that coincidentally happened to be in Jonney Shih’s coat pocketâ€¦ all through Windows Live and all running on a netbook using Windows 7. While I doubt these features will ever be an exclusive on ASUS netbooks, it was refreshing to see Microsoft’s next OS running so apparently smooth on a machine with such pedestrian specs.

Moving into exclusive ASUS features, a demonstration of touch screens began. Using another netbook, we were treated to a demo of the possibilities opened up by multi-touch technology. In a demonstration, we saw Microsoft Live Earth being manipulated with simple finger movements. Sadly, the demo took a turn for the worst when the ASUS touch software decided that it wasn’t going to operate as it was designedâ€¦ bleeding-edge I suppose. Luckily this was all developmental software and not something that’s sitting on store shelves now. 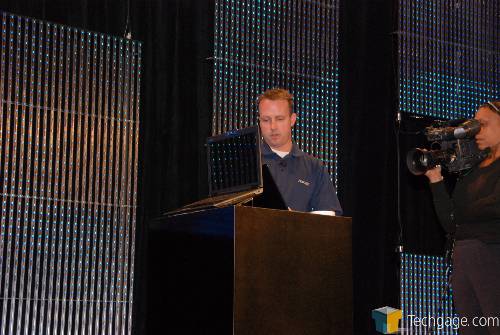 Another net/gimmicky idea that was presented was a notebook with a separate smaller computer controlling a display in the touch pad. This would allow simple information to be displayed such as stock information, email, anything that widgets do nowâ€¦without the entire notebook being powered on. The one neat(ish) thing about this idea was that a movie can be played on the main screen from the smaller computer running on the touchpad. I honestly don’t know how much power that this idea would save but ASUS states that operating on the trackpad screen alone would give the user an estimated 12 hours of battery-life. This all seems somewhat gimmicky to me but I am sure that many beneficial uses could be found by many. One thing is clear though, ASUS’ R&D department clearly has an unlimited budget and this entire concept reminds us of slide show.

The clear winner of the conference however was their introduction of the conceptual Eee keyboardâ€¦ an entire PC in keyboard form. This device apparently will work on wireless HDMI, effectively transforming any capable television in your home into a monitor. Given the astronomical cost of any wireless HDMI adapters, this keyboard won’t likely see the light of day for a decent amount of time (my guess). 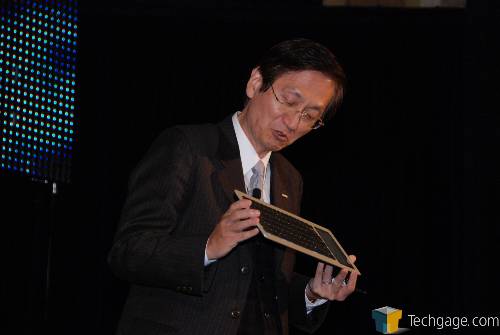 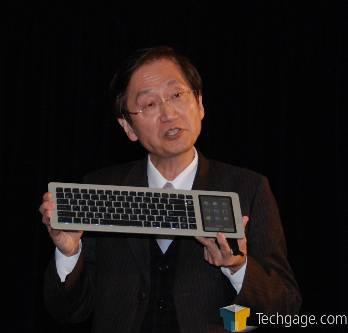 Without a doubt, 2009 looks to be another strong year for the Eee lineup. With the economy as it is, the need for affordable mobile computing should only grow. As ASUS continues to push their engineers to innovate as many things as possible, I hope that they can keep sight of what made the Eee PC’s so popular in the first place. Give me a dual-core Atom in any of their stellar netbooks and you have me sold.

I’m not personally sold on a lot of the touch screen push that is being made but it is undoubtedly where things are heading and if that’s where we are going, why not ASUS? We have seen what Apple can do with the iPhone so I am excited to see what ASUS can do with similar technology on the netbook/nettop/desktop/notebook front. We’ll bring you more once we meet with them one on one later this week but from what we saw today, 2009 should a another great year for ASUS.