As the market heats up with the continual hardware launches specifically aimed at each and every one of our inner gamer, it’s easy to get optimistic about the future of PC gaming. That’s not to say however, that the hardware has never –not- been there, but rather that we are now seeing more and more gaming oriented hardware coming out all the time.

After all, it’s the gamers who are more than willing to line up and pay the premium price for the ultimate frame rate. That’s not to say that the more mainstream products are bad. In fact, companies make the bulk of their money at the budget level but it should also be said that bragging rights are won and lost in the enthusiast trenches that are more often than not completely filled with us gamers.

One company that is leading this charge is the always trusty Asus. With the announcement of their gaming oriented line of motherboards, the Republic of Gamers, or RoG, they have captured the attention, and wallets, of gamers everywhere. Long have they, and most other companies for that matter, produced high quality, high performing motherboards. Now though, we have a product line to call our own.

With the Republic of Gamers, we can now be in elite company. Is this true or could it just be marketing at its best? With RoG, Asus themselves offers “the best hardware engineering, the fasted performance, the most innovating ideas, and we welcome the best gamers to join in.” Strong words to say the least.

Today, we are taking a look Asus’ latest addition to the RoG lineup, and their third overall. Based on the Intel P965 “mainstream” chipset, the Commando is a welcome addition to the RoG series of motherboards as it’s priced considerably less than the Crosshair and the Striker Extreme.

Since the platform first came out, there was been quite a stir about the overclocking capabilities of the P965 chipset. For most, it was obvious that Asus would eventually through their research and development might behind this chipset and bring a gaming oriented motherboard to market. That board is the Commando. 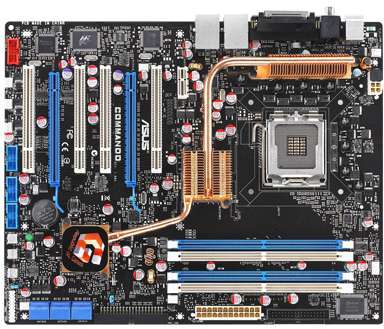 Throughout the past month, we have put the Commando through its paces, run it up against two other motherboards, both using different chipsets and worked to obtain our max overclock. Speaking of overclocking, Asus claims to have reached an astonishing 575MHz front side bus. This seems like an absurd frequency for the FSB but there are screens on the Asus webpage verifying this feat.

Could we get that high with our E6600 and how did the Commando stack up against the 975X based DFI Infinity 975X/G and the DFI ICFX3200-T2R/G? As we get into the review we will see how the Commando performed but first, let’s get a look at what the latest addition to the RoG has to offer.

The spec sheet for the Commando is rather lengthy but we will cover what we feel is the most important.

One thing to note here about the specs is the limited support for ATi’s CrossFire. Originally not intended to support this technology, the chipset, and sub sequentially, the Commando, now support CrossFire, even if it’s crippled on paper. Aside from that, the Commando’s support for quad core CPUs is noteworthy as well.

The parallel port for most optical drives and Ultra ATA hard drives is provided by JMicron as the P965 chipset does not natively support this quasi-legacy technology. This, to me is a welcome sign of things to come. While I still have many Ultra ATA drives, optical and disk, the cables are a pain and SATA is so better in every single way.