Moving onto one of the main things that make a Republic of Gamers motherboard a Republic of Gamers motherboard. We of course would not be talking about the performance of the board, that for a little later in the review. No, this line of boards has built a name for itself thought the extras that come with it as much as it has based on how the board works.

Arriving in its retail packaging, the first thing that we notice of the size of the box that it came in. Coming in a large, motherboard width box, we can tell from the start that this is a RoG motherboard. This notion is reinforced with the large RoG eye logo in the upper left hand side of the box. Also, we see that it not only ships ready for Windows Vista (a much bigger issue at the time of release, more so than it is now) but it also comes with a full version of Futuremark’s massively popular 3D Mark ’06 and Ubisoft’s Ghost Recon: Advanced Warfighter.

It’s always a welcome sight when a piece of hardware ships with a game and is certainly a breath of fresh air when that game is a quality AAA game such as GRAW. 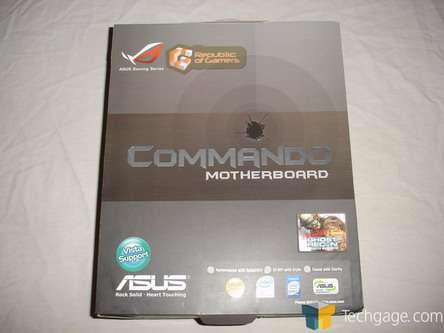 Moving to the back of the box, we see an assortment of features that the Commando ships with. These include the popular back lit LCD readout on the back of the motherboard (though not near as impressive as the other RoG boards), an HD audio card based on the 1988B codec and the popular title GRAW. 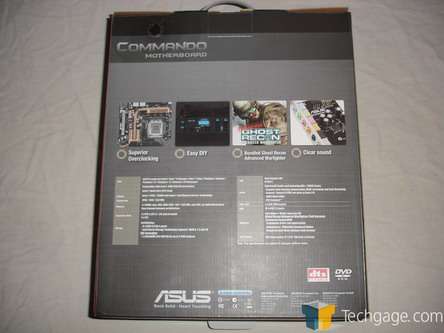 Once open, we see that the Commando comes wrapped not in the usual anti-static bag that most all other motherboards come in, but rather in its own plastic housing. There is another separate box that houses the extras of the bundle. 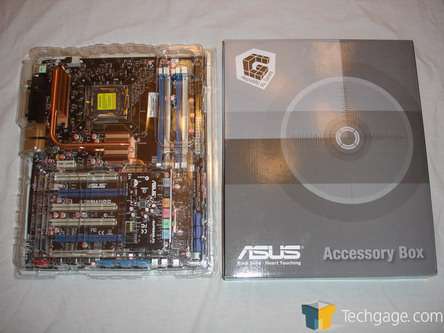 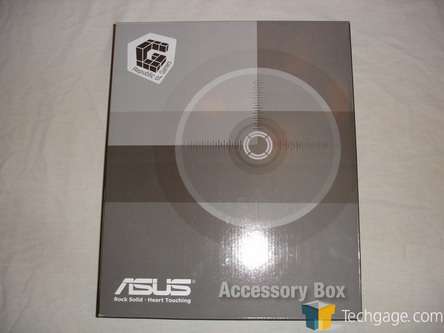 Once into the bundle, we first see the documentation. Asus has always impressed me with their thorough manuals and the Commando’s does not disappoint in this regard. With information spanning well over 100 pages, the manual provides all the vital information that is needed to not only piece together your PC as well as minor troubleshooting walkthroughs as well. Also shipping with the Commando is a quick start guide and a manual that contains a CD with various media applications. 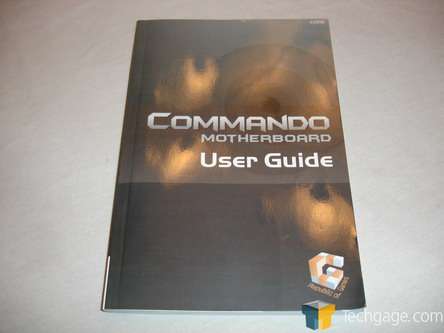 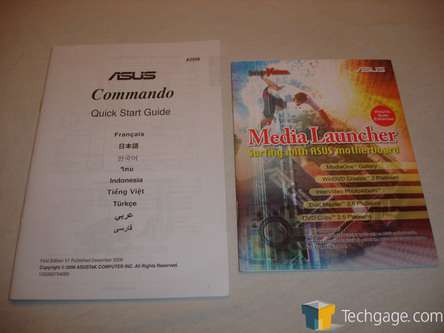 As promised, the Commando included a retail version of Ghost Recon: Advanced Warfighter, as well as a driver disk containing 3D Mark ’06 and the necessary drivers. For good measure, there is also a disk containing various drivers known to work with the latest Microsoft OS, Vista. We found, in our testing that Vista detected all of the hardware itself and we did not need to use the disk once. However, each persons experience might vary so rest assured, the needed drivers are included in the Commando’s plentiful bundle. 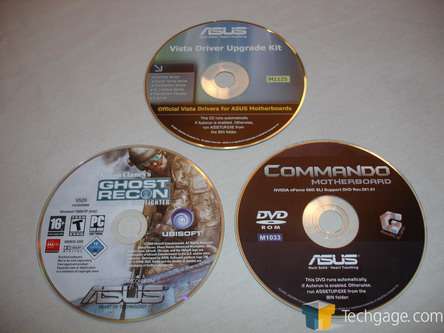 Also included is a small fan that is to be mounted on the heatsink that sits on the voltage regulator on the motherboard. In theory, the heat from both the north and south bridge will travel up the heatpipes and into the heatsink. This fan should only be used by those that do not cool their CPU with air. With a heatsink, air should travel across this heatsink, keeping it cool. With water however, air will not be moving across the heatsink. This is where the fan comes into use. 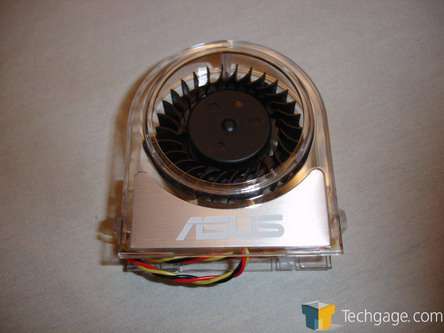 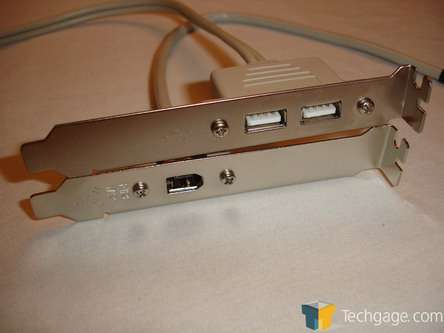 To connect your SATA hard drives to the Commando, Asus has bundled 6 SATA cables. Three have a 90 degree bend in the connector and three are the standard straight. 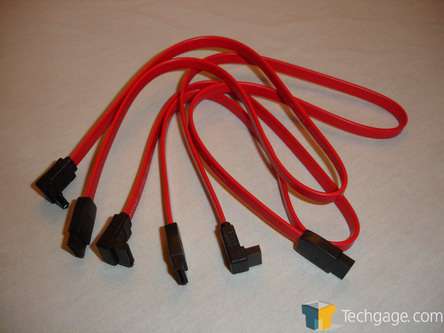 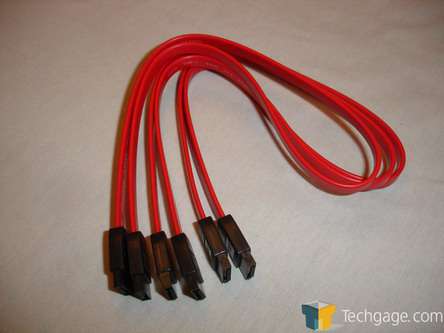 For those of you who might not have the appropriate power connectors on your power supply, there are 3 4-pin to SATA power adapters included. Each of these can power 2 SATA drives. 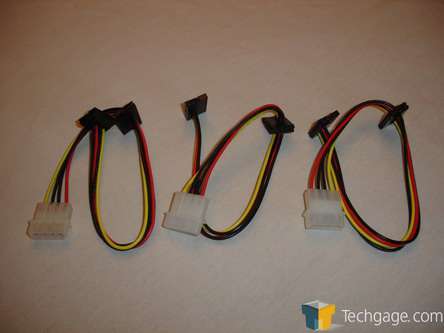 One of my favorite additions to the Commando, and many other Asus motherboards, is the Q-connector. I can only assume that Q is short for quick and that’s exactly what these pieces make your installation. Instead of fumbling around in your case to connect the power, reset and activity headers, you simply plug those same cables into the Q-connector and then place it on the motherboard. It’s one of those things that make you ask yourself “Why didn’t I think of that?” Not only does Asus include one for the power headers, but there is also one for your USB and FireWire connections as well. 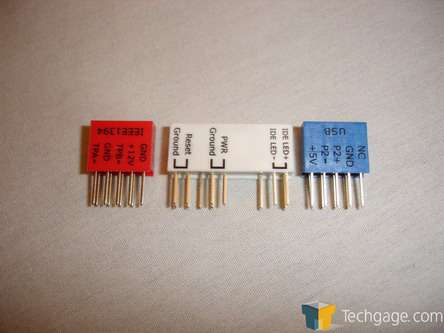 Rounding out the bundle is the I/O shield, a pair of cables for IDE and floppy drives, an Asus case badge and an apparently empty plastic bag. Seriously, this bag includes some clear zip ties for those of you concerned with how their cables look in the case. This is a simple addition but one that most people can instantly appreciate. 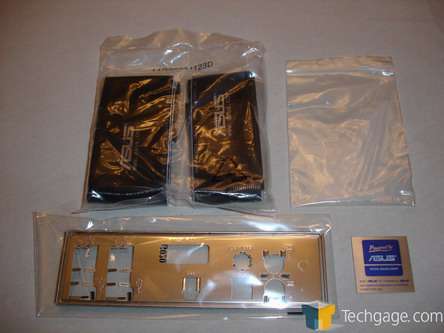 While not an extremely over the top bundle, it is certainly one of the better ones you can find. It’s obvious that Asus is taking the RoG line of hardware very seriously.