In testing power consumption for our graphic cards, the system components are kept consistent to help keep accurate results. To capture wattage, a Kill-a-Watt is used. It is plugged straight into the wall and the PSU is plugged in directly to it. After the computer is booted into Windows and is left idle for five minutes, the idle wattage is captured. 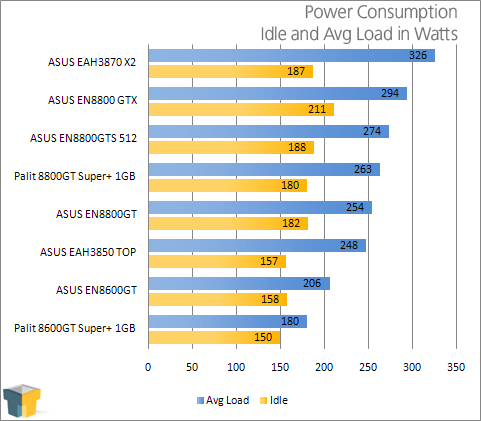 Not surprisingly, the 3870 X2 sucked the most power, but it’s reasonable since it also proved to be the best performer of the bunch. The GTX falls slightly behind, while the GTS 512 has the best power/performance ratio of all cards tested. Those 1000W PSU’s look ridiculous when looking at charts like this. Even with the GPU in full load, we didn’t even come close to 400W!

It goes without saying… this is the fastest single-card solution on the market right now. Is it for everyone? Not necessarily. As mentioned earlier, the card doesn’t scale as you’d imagine a single-GPU to in most games… simply because it’s not a single-GPU. It’s essentially Crossfire, only on a single card, so oddities that occur with Crossfire and SLI alike can also occur with this card.

But even that aside, performance on a single GPU is enough to get you by with all of today’s games, but it’s with the higher resolutions and AA that the X2 really begins to excel. This is most notable with our Unreal Tournament III tests. That’s one game that really shows off the power of a multi-GPU setup, and if all games reacted as such, it would make this card a no-brainer.

For those looking for a single-card solution, the 3870 X2 delivers. For those looking to take another route, dual NVIDIA 8800GT’s in SLI would offer better overall performance while costing roughly $20 less at the same time.

But to turn the tables on that argument, AMD will soon be releasing drivers to allow two 3870 X2’s to run in CrossfireX, effectively giving us the power of four GPU cores. Performance gains are not yet known, but if executed properly, we might see incredible gains in games like Crysis, but it’s impossible to tell until we get our hands on that driver.

The main downsides of the card are the bugs that arose during testing. Under Windows XP, the driver didn’t take care of one of the components (ATI Function Driver for High Definition Audio), so each time Windows was started, a hardware install prompt would open up. Allowing it to search Windows Update took care of that, but the official ATI driver should have taken care of it and not force the user to. 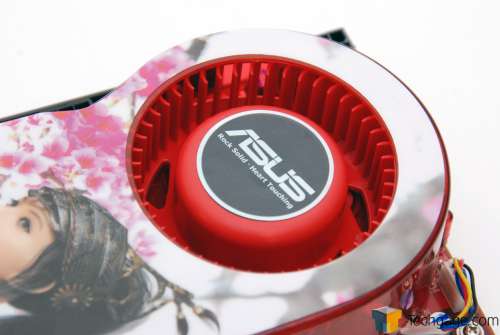 I also experienced a few issues under Vista 64-Bit, such as the Crysis splash-screens and main menu not displaying correctly. The videos were horribly distorted, while the main menu would flicker randomly. This did not occur under Windows XP, so I believe it to be an issue with Vista 64-Bit specifically.

Lastly, while the card performs exceptionally in a few tests, it performed equally poor in others, such as Crysis and Need for Speed. In all fairness, a Crysis driver fix is in the works, but to come in last in our NFS: Pro Street runs struck me as odd. Since a Crysis fix is on the way, I am hoping that the performance will be fixed with NFS and other potentially poor-performing games as well.

Overall, the 3870 X2 is priced right, performs well (with some caveats) and would make a solid purchase for anyone wanting a super-powerful single-card solution in their PC. If you have absolutely no desire to make the move to Crossfire 3870 X2’s once it’s possible, going with 8800GT’s in SLI is another option, as it costs slightly less, should prove a little faster and is also better supported.