We took a quick look at the X1950PRO when it was first announced a few months ago, but this is the first time we take a deeper look to see how it compares against the direct competition. On the NVIDIA side of things, the 7900GT is directly in line with what the X1950PRO has to offer, and both happen to be in the same price bracket.

I’ve been a fan of my ASUS 7900GT, so I was looking forward to seeing how both cards fared against each other. To me, the 7900GT and X1950PRO cards are for those who want a very good card at an easy to swallow price. Last week, we took the X1650XT for a spin. It proved to a solid budget card, but as we find out, this X1950PRO blows it’s pants off for about $40 more.

Actually, the pricing for this specific card is one thing that surprised me. Checking out a few popular e-tailers, ASUS’ card proved to be cheaper than most others out there. As per past experience, I’ve been in the habit of seeing their products priced higher than others, but not here. While most other X1950PRO’s and 7900GT’s available retail for $220 – $260, the ASUS EAX1950PRO retails for only $190 – $200. Note though, that there are two versions of the card. You can expect to pay more for the Crossfire edition, which includes the bridges you will need.

The max resolution that the card offers is 2048×1536, so no 30″ monitors for those who have them. I will jump to conclusions in guessing that those with those monitors won’t mind springing for a high-end GPU though.

This card can be compared in a lot of ways to the X1650XT, but the 1950s 256-Bit memory interface is certainly going to help put the card far beyond what the 1650 has to offer.

Like the X1650XT, this card also arrived in a very thin box. It’s large enough to safely hold the card, and the extras. This is what I like to see. If you recall my EN7950GT review, the box there was near 50% larger in volume compared to a standard motherboard box. Boxes like the one below are good for the environment, and also won’t hog all of your closet space if you like to hold onto them. 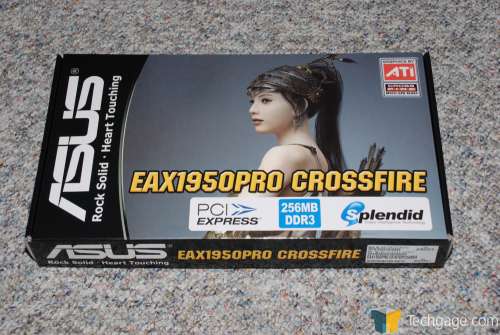 The contents are also similar to what we have seen with the X1650XT. The only difference is the lack of a second DVI connector and also a game. The card we are looking at is the Crossfire edition, so it’s contents are slightly different. This card assumes that you will not need a second DVI connector, because you would have had one with the non-Crossfire edition. Most manufacturers include a bridge in each card, but ASUS holds off and decided to include two bridges with the Crossfire edition. This works out to the favor of those who don’t want Crossfire, but to those who do, should expect to pay $20 more for the version with the bridges. 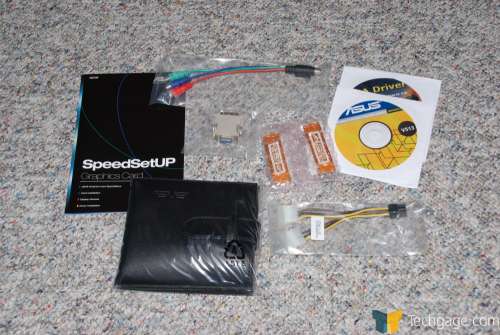 If you are familiar with the cooler ATI throws on their cards, you will probably notice that this one is nothing like it. Both coolers have their advantages though. ASUS obviously was going for the quietest solution. Overall, the cooler takes up less room on the card, but is slightly taller, thanks to a heatpipe. 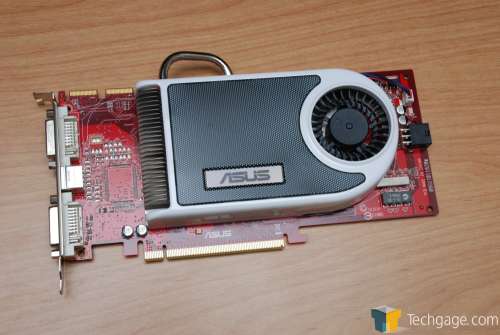 One thing that quickly struck me was the sheer size of the card. Compared to a 7900GT, the X1950PRO is about 3/4″ longer so it may prove to be a tight squeeze for smaller PC cases.