As you’d expect with an all-in-one PC, setting up the EeeTop PC is an absolute breeze. If you want to use it right away, all you have to do is place the unit on your desk or another flat surface, connect the power cord to the device and then to the wall, and boot up. It’s that simple. I do however recommend keeping the keyboard nearby, since a few questions during the Windows’ setup are easier to answer with one.

On the first boot, you’ll be welcomed by Windows XP’s post-installation screens, which is where you can enter a user name, set the time zone… all that good stuff. You can also set up networking here, but if you plan to use wireless (and I assume most people with an this machine would), you’ll have to wait until you hit the desktop.

Before we check out the OS and software, though, let’s take a quick look at what the EeeTop PC packs in terms of hardware. For the most part, you could call the PC a netbook for the desktop and you’d be pretty much right on the money. This machine shares the same CPU and memory configuration as the Eee PC netbooks, so you can expect similar performance.

The choice of an Atom processor for desktop use may seem a little odd to some, but as soon as a larger CPU is added, such as a Core 2 Duo, the price goes up, and so does the internal design of the PC. The Atom is a simple chip, offering a single core (with HyperThreading), and because of its modest size and heat output, a simple cooling solution can be used. At full load, I’ve found the Atom N270 in the EeeTop PC to just hit 60°C, and during normal use, it hovers around 57°C (room temp ~80°F).

Plus, as mentioned on the first page, this isn’t supposed to replace your main machine, but rather be used as a supplement, so with all things considered, the Atom N270 is completely sufficient. I’ll touch up a bit more on the performance factor later, but don’t let the weaker system specs get you down… you’d be surprised just how capable this little machine is.

As seen in the chart above, the EeeTop PC comes pre-installed with Windows XP Home, which is more than capable of taking advantage of all that this PC offers. Vista of course won’t run too well here, so it’s not even worth trying. That inability primarily has the integrated graphics to thank, but with Microsoft promising Windows 7 to be much friendlier to netbooks/nettops, we may very well see that as an upgrade option in the future.

Although Windows XP can be used as normal, ASUS bundles in a feature called the “Easy Mode” which is designed to turn the PC into more of a kiosk, where you can access certain features quickly, rather than surfing through the Start Menu or desktop. The Easy Mode is comprised of four sections, the first of which contains four common communication applications: Skype, E-mail (default e-mail client), Eee Memo and also Internet (contains many different shortcuts). I’ll touch up on Eee Memo on the following page in more detail. 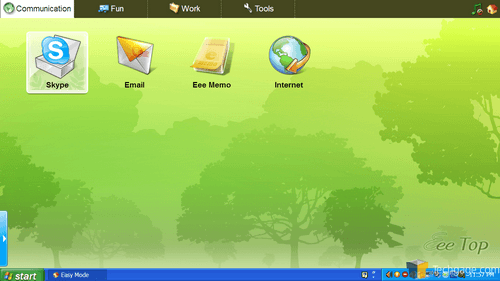 The “Fun” section is where anything entertainment can be found, starting with the Eee Cinema (media center). Then we have the Eee Cam (web cam software), sound recorder, Solitaire and so forth. ASUS also includes two simple games called Adventure Under the Sea and Eee Band, both of which will talk more about on the next page. 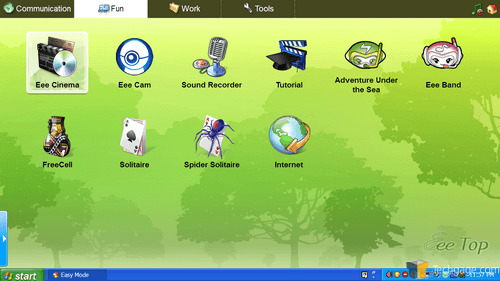 “Work” is where you go to get some work done, whether it be a simple calculation you need to sort out or whether you want to work on a spreadsheet or document. All of the office shortcuts are tied to Sun’s StarOffice. 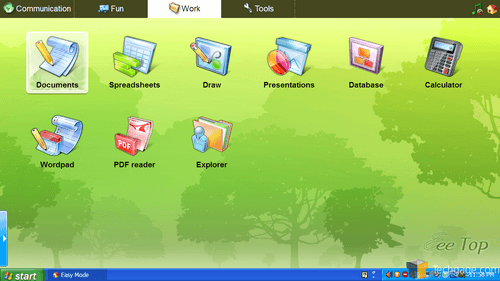 “Tools” is the most robust section of them all, because it’s where you need to go to customize the PC in any way, and it’s also the spot to load up Opera or Internet Explorer fairly quickly. To update the system software, you can use the “Easy Update”, and for the BIOS, you use “ASUSUpdate”. Other options allow you to access the volume dial, Control Panel, the SRS audio and also the SoftStylus, which is used to input characters without the use of a real keyboard. 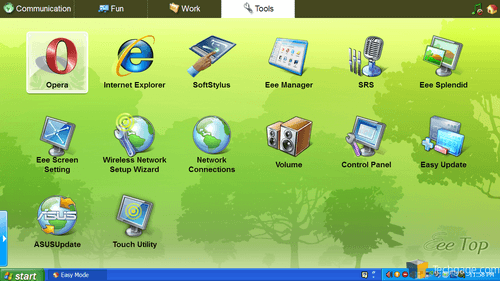 The Easy Mode is a great-looking solution for the EeeTop, but there is one slight issue I have. Notice all of the icons… they all look great, and have been obviously designed by people with talent. With such nice icons, you’d expect to click on one and see a nice looking application as well, but that’s not the case. Take the calculator icon for example… all it does is load up the Windows calculator (calc.exe), which is hardly attractive.

Now, to be fair, I understand that ASUS has reservations for wanting to devote so much time to programming their own such applications, but a calculator for one wouldn’t be that difficult, and it could really add a lot to the PC. If the EeeTop PC takes off, hopefully we’ll see such customized applications in the future. Luckily, if that does happen, all that’s required is a software update, which as I found out, is very easy to take care of.

Finally, the below screenshot shows what the desktop looks like when the Easy Mode is minimized. The wallpaper is clean and suits the PC well. The “Welcome” folder contains quick links to the two touch games ASUS has included, as well as a tutorial on how to use the PC and also an e-manual. 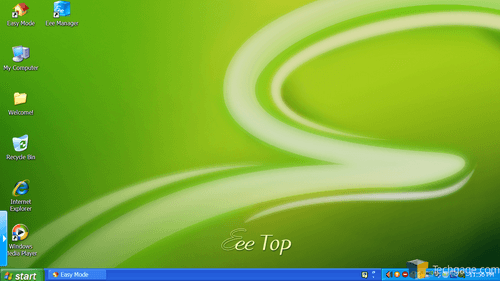 Also, take notice of the two icons in the above screenshot’s system tray, the yellow exclamation mark and also the stop sign. The exclamation mark icon is labeled as “SOS!”, and when clicked, it will load up the Task Manager. The stop sign also allows you to load up the Task Manager, but also allows you to shut down the Easy Mode, or shutdown/restart the PC or put it into standby mode.

I have no complaints at all about the OS chosen or the overall setup. It all comes together well and more importantly, works well. ASUS could have bundled a version of Linux on here, but because they chose Windows XP, it opens up a lot of possibilities for software, and you are free to install your software on disc if you have an external ROM drive.